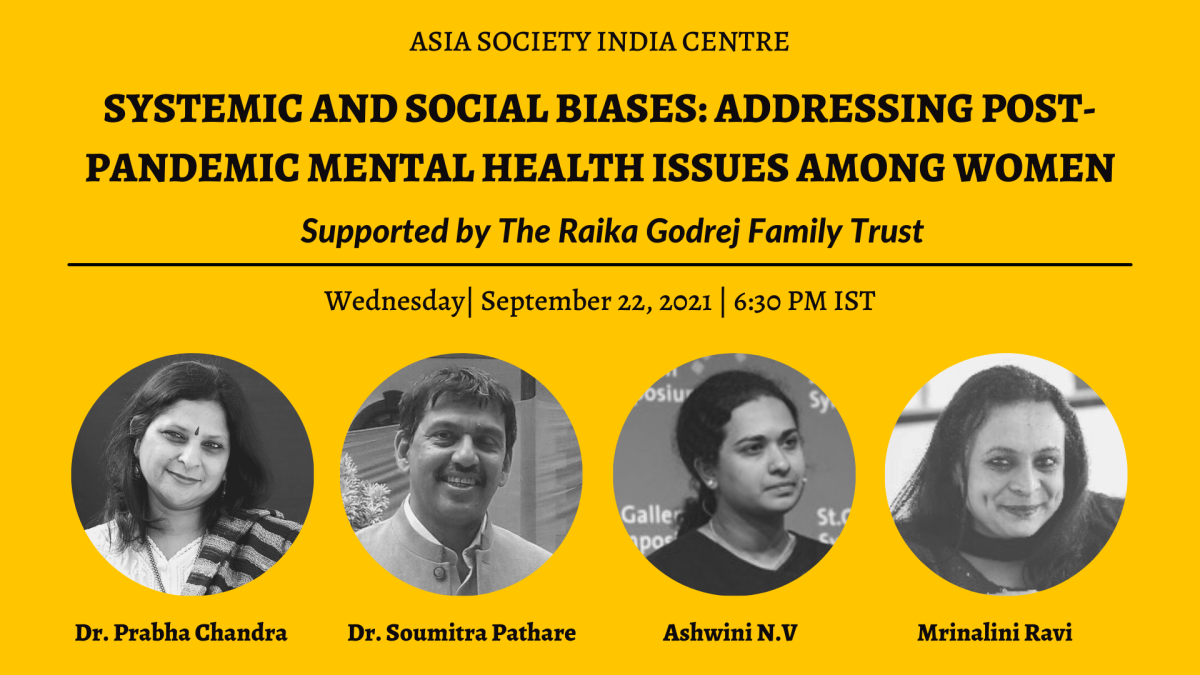 During the COVID-19 pandemic, we have observed that fatality rates among men have been higher than women, however, its impact on women’s mental health has been disproportionately higher compared to men. Several surveys reveal that COVID-19 positive patients, especially women, have reported higher levels of depression, anxiety, and post-traumatic stress. Women also reported a significantly higher sense of “Perceived Helplessness” than men. According to a UNFPA report in 2020, 'Significant levels of lockdown-related disruption over 6 months could leave 47 million women in low and middle-income countries unable to use modern contraceptives, leading to a projected 7 million additional unintended pregnancies.'

UN Women estimates that even before the emergence of the pandemic, 1 in 3 women globally experienced physical or sexual violence mostly by an intimate partner. In India, there has been a rise of 2.5 times in complaints of domestic violence received by the National Commission for Women (NCW), New Delhi in April 2020. Victims of domestic violence and sexual abuse are highly exposed to developing multiple mental disorders as well as somatic disorders. Pandemic-induced disruption in justice services and support mechanisms of protective networks have further intensified these challenges as access to mental health institutions has been severely affected. Add to this, the pandemic has also intensified instances of cyberbullying which has given rise to a deep sense of insecurity and stress-induced depression.

Globally, women make up 70% of the workforce in the healthcare and allied sectors. This makes them particularly vulnerable to mental health risks in times like these. According to the World Health Organisation (WHO), health care providers are disproportionately prone to develop serious mental health disorders including Post-traumatic stress disorder (PTSD), depression, anxiety, and emotional burnout. Lack of self-care among women is another major cause of concern. Job losses, burgeoning domestic responsibilities, and increased caregiving roles during the pandemic has severely impacted the mental health of women.

Going forward, as we gradually, yet cautiously, recover from this pandemic, can institutional support systems reduce experiences of mental and physical abuse faced by women? What can be done to strengthen redressal systems for women facing mental health issues? Are the helplines effective? Are they accessible to all women? What resources, plans, and policies support women with debilitating mental health concerns?

Join us for a conversation aimed at understanding the impact of the COVID-19 pandemic on women’s mental health and immediate areas of concern with Dr. Prabha Chandra, Dr. Soumitra Pathare, and Ashwini N.V. The discussion will be moderated by Mrinalini Ravi.

This will be the second session of our new virtual series ‘The Invisible Pandemic: Mapping Post-COVID-19 Mental Health Crisis in India’ supported by The Raika Godrej Family Trust.

Dr. Prabha Chandra is a Professor of Psychiatry and in charge of the Perinatal Psychiatry Services as well as the NIMHANS Centre for Well Being at the National Institute of Mental Health and Neurosciences, Bangalore, India. She has championed for the development of maternal mental health services in India and has set up the first dedicated perinatal psychiatric service in a public health setting including a Mother-Baby inpatient psychiatric unit.

Ashwini N.V is the founder and director of MUKTHA Foundation (An Initiative to Prevent Abuse and Promote Mental Health). She is an adjunct faculty member in the Post Graduate Department of Psychology at Jain University, Bangalore, and Montfort College, Bangalore. She served as the co-ordinator of ‘Centre for Diversity in Counselling and Psychotherapy, a collaborative effort of Montfort College, Bangalore and the University of Toronto, Canada in the past.

Mrinalini Ravi is Co-Lead at the Sundram Fasteners Centre for Social Action and Research at The Banyan Academy of Leadership in Mental Health. She leads The Banyan’s Social Cooperatives and the Coalition for Homeless Persons with mental health issues. Her primary interests lie in urban homelessness and civil society responses towards the needs of homeless persons with or without mental health issues.