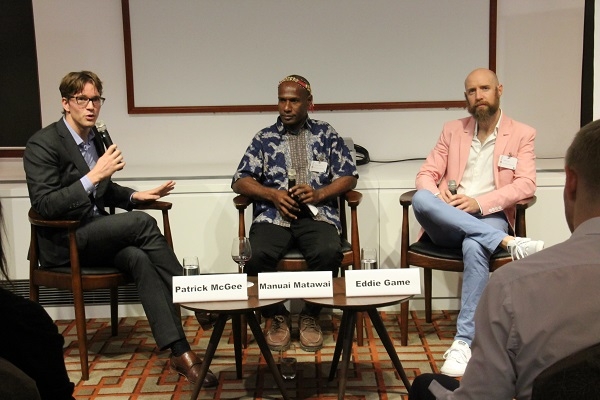 HONG KONG, 14 October 2015 - The Nature Conservancy's Lead Scientist (Asia Pacific) Dr. Eddie Game, Papua New Guinea Conservation Coordinator Manuai Matawai and fastFT's lead writer Patrick McGee have gathered at Asia Society Hong Kong Center to discuss the most pressing issues surrounding one of the most-debated topics of our time: climate change. The spotlight was immediately focused on the challenges and impacts faced by Papua New Guinea, one of the most direct victims of climate change in the world, as well as how islanders along Pacific ocean are coping with the issue.

"In Papua New Guinea, about 95% of the land and sea is owned by the people. With over 800 different languages and cultures nationwide, it is a complex task to deliver services to the people. In terms of the alignment and planning to achieve the Papua New Guinea Vision 2050, there's a big gap between the local governments in the provincial level and the international level. The Nature Conservancy plays a big role by trying to fill the gaps amongst the communities and to create awareness and to build resilience against climate change- this is what the government of the day cannot fill in," says Matawai.

"In 2012, I've set out on a voyage called The Climate Challenger. With 10 crew on board the canoe, we sailed in the open sea across the Pacific islands educating people about the effects of climate change, teaching them how to act responsibly to it," Matawai explained. "The environmental community is generally very hopeful about Paris [2015 United Nations Climate Change Conference] that each country is going to make a commitment that is ambitious but also achievable. In some ways, the most hopeful thing we could get is a unified commitment, so that everybody acknowledges climate change is a big issue. If everybody is making a commitment, that's a big step," Game concluded.