Our sculpture has found a place that feels like home. He wants to face the world – whatever the weather – and let the spirit of this remarkable city embrace him.

The logistics of his desire come at a price – and it’s one we can’t reach without your help.  We are fundraising to keep him here.

By contributing to this campaign, you will be standing with the sculpture, and with the people of Hong Kong. You’ll be supporting a community that cares about one another, that celebrates art, culture and thrives together in a city we all love.

He sees something special in Hong Kong, and so do we. Donate now and help him stay in this place he’d like to call his forever home! All donors will be invited to an appreciation event at the conclusion of the fundraising drive. 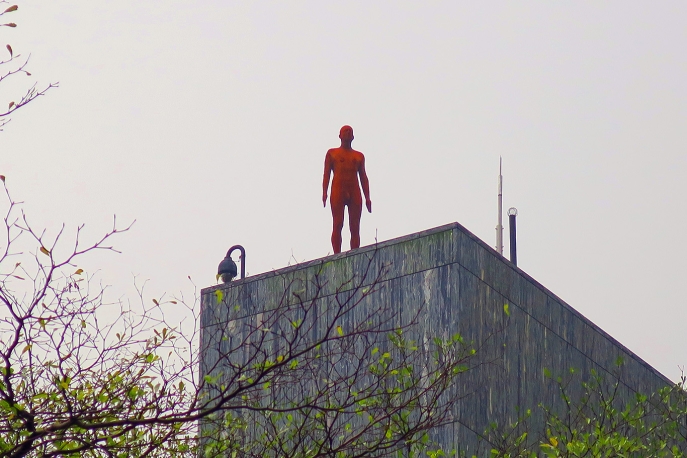 Antony Gormley’s Another Time XX is part of Event Horizon Hong Kong (2015-2016), the most extensive public art installation ever seen in the city. The 31 sculptures looked out into space installed at both street level and building tops around Central and Western districts on Hong Kong Island, including ASHK. Isolated against the sky, where densely spaced and densely occupied towers rise up between mountains and sea, these still and silent bodies looked out into space, asking where the human project fits in the scheme of things.

Event Horizon challenged us to look up and look again at familiar places in a new way. This installation questioned how the built world relates to an inherited earth, and was originally conceived in the year in which it was first reported that half the planets human population were living in cities.

After the Hong Kong leg of Event Horizon, ASHK hopes to continue encouraging everyone to stop, pause and reflect.

English sculptor and draughtsman. He studied archaeology, anthropology and art history at Trinity College, Cambridge (1968–71) and Buddhist meditation in India and Sri Lanka (1971–4), experiences that profoundly inform his work. Influenced by the ideals of Indian sculpture as much as by those of modernism, his sculptures use the human form to explore man's existence in and relation to the world.

Gormley is widely acclaimed for his sculptures, installations and public artworks that investigate the relationship of the human body to space. He is primarily known for the figures cast from his own body, based on his belief that the spiritual and physical selves are inseparable. Many works were made specifically for natural environments, most controversially Angel of the North in England. His work has developed the potential opened up by sculpture since the 1960s through a critical engagement with both his own body and those of others in a way that confronts fundamental questions of where human beings stand in relation to nature and the cosmos. Gormley continually tries to identify the space of art as a place of becoming in which new behaviours, thoughts and feelings can arise. In 1997 he made an Officer of the British Empire (OBE).