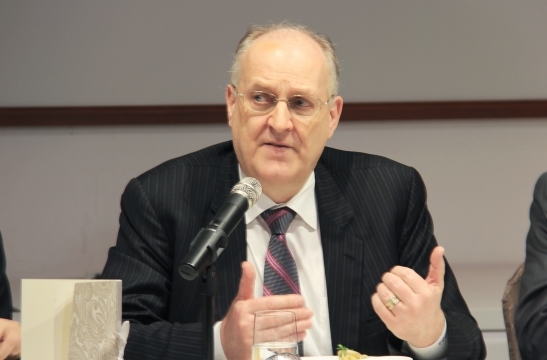 HONG KONG, March 25, 2015 — While taking a positive outlook on the global economy, Paul Sheard, Chief Global Economist and Head of Global Economics and Research, Standard & Poor's Rating Services, outlined possible risks that will come with during a luncheon presentation at the Asia Society Hong Kong Center.

After the 2008 financial crisis pushed developed countries including the United States, Japan, and Europe into one of the deepest recessions since the Great Depression, the shadows have since lightened and the global economy has been expanding slowly since 2009. According to Sheard, a shifting growth momentum with the United States economy picking up, supportive monetary and fiscal policies, a drop in oil prices, and the IT revolution are all contributing to the growing global economy.

Yet, he also outlined three risks that could "move the needle in terms of global growth," citing the comeback of the Eurozone crisis, the hardlanding of China's economic growth, and the possibility of  the Fed's monetary policy not achieving its goals.