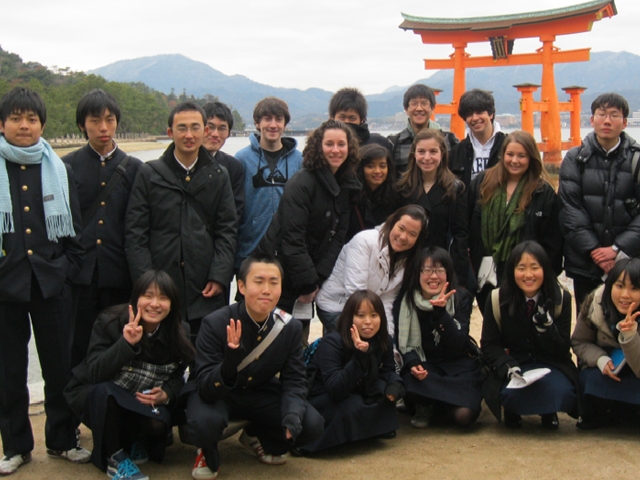 “Participating in this program has been an amazing experience and I hope other students will have the same opportunity in the future. I was able to get a firsthand understanding of Japanese culture and make friends from across the world.

"One of the most important aspects of this program for me was the realization that global scientific efforts can be successful. The students and teachers were able to devise a project that was interesting and had true scientific merit. This project allowed students to apply the techniques learned in the lab to a real-world situation. We were able to collaborate with researchers from both the United States and Japan, and in the end accomplished our goals. Initially, I had some doubts about this project, because it was hard for me to see that we could work successfully with students that lived so far away. After finishing this project, I see that global collaboration is a real possibility.”

At the Bergen County Academies (BCA), a secondary school in Hackensack, New Jersey, international content and perspective is integrated across all grade levels, core subject areas, and elective courses. This commitment to global education projects has resulted in a partnership with Kokutaiji High School in Hiroshima, Japan, one of Japan’s four Super Science High Schools. This ongoing collaboration was further enhanced this past February when a delegation of BCA students traveled to Japan at the invitation of Kokutaiji High School. Students attended an international science symposium in Hiroshima sponsored by the Japanese Ministry of Education, learned about Japanese culture and history, and launched a joint research project with the Kokutaiji students.

This is not the first time that students from BCA and Kokutaiji High School have participated in a joint research project. Since 2005, teachers and students from both schools have experienced a cultural exchange program that has focused on global learning with a biotechnology concentration. One of their earlier joint research projects investigated the differences between the mitochondrial DNA of the Japanese Giant Salamander and the Eastern Hellbender of the United States.

Research students from both schools are on the verge of collaborative joint research on cherry trees. The Kokutaiji students had begun a project looking at the effects of atomic bomb radiation on these trees, documenting that cherry trees exposed to the atomic blast have several differences in growth patterns, coloration of leaves, and leaf texture when compared to age-matched trees that were not exposed. BCA students are hoping to further the collaborative project by including genome analysis and the culturing of cells to determine if they grow and divide at differing rates. In March 2011, a visit by the Japanese students to the Academies campus will afford the opportunity for continuing joint research in the BCA labs.

The Bergen County Academies, part of the Bergen County Technical School District in New Jersey, is a public magnet high school of choice offering students seven specialized programs in the areas of Science and Technology, Business and Finance, Engineering and Design Technology, Medical Science Technology, Visual and Performing Arts, Culinary Arts and Hotel Administration, and Telecommunications and Computer Science. Students in all subject areas are given opportunities to make international connections through global outreach projects that BCA integrates throughout its curriculum. Using social media and videoconferencing, two cost-effective, web-based technologies, enables BCA students and teachers to gain access to the global community. Projects vary from social media forums in history and literature conducted with students in Spain, to sharing entrepreneurial business practices during videoconferencing with a school in Singapore.

One notable global education project focuses on Chinese language classes with a combination of language immersion and cultural exploration through an important partnership with San-Sin High School of Commerce for Home Economics, a Microsoft “School of the Future” in Kaohsiung City, Taiwan. The students’ efforts to communicate in a second world language within the core subject of history and culture is proving to be a powerful part of the project, thus strengthening BCA’s global and cultural awareness curriculum focus.

The Bergen County Academies continues to model global education infusion as it strengthens its ties around the world. Collaborative projects resulting from these partnerships enable the school to fulfill its mission to prepare students to live, lead, and learn within a global community.