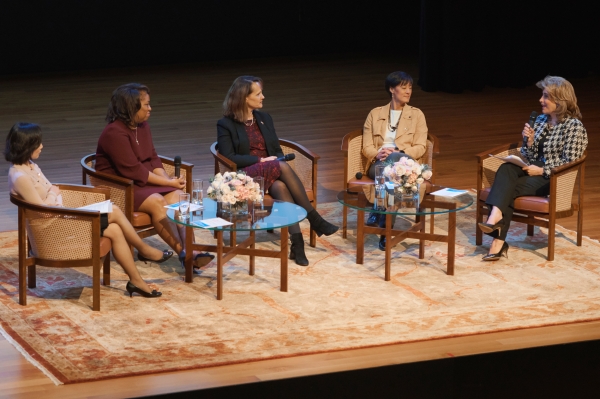 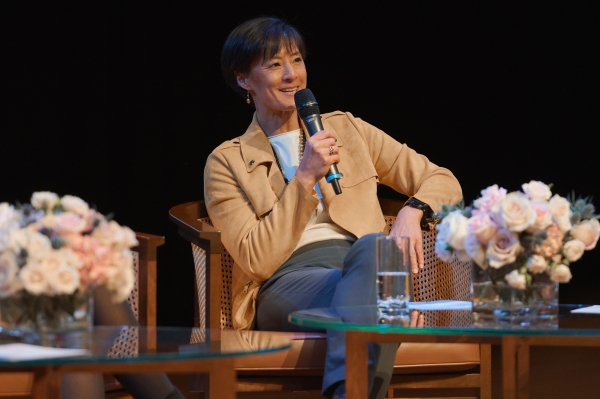 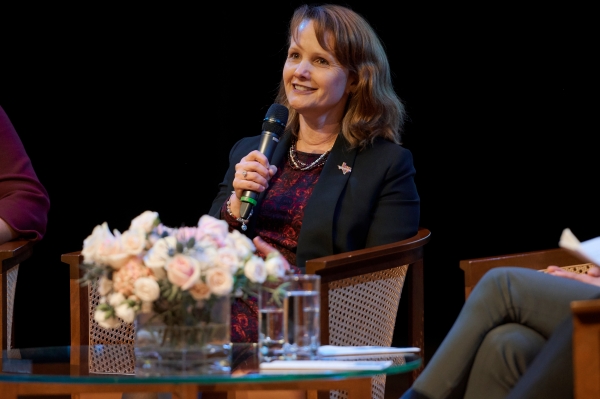 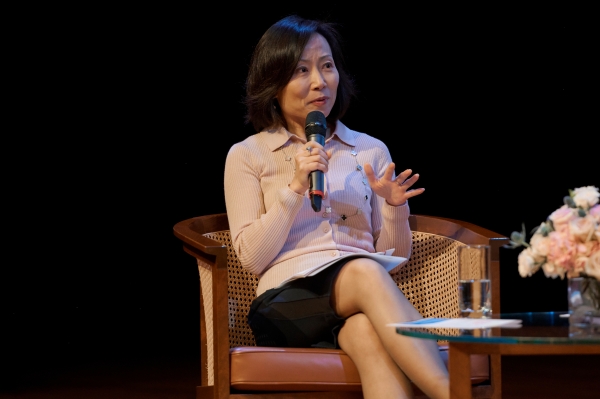 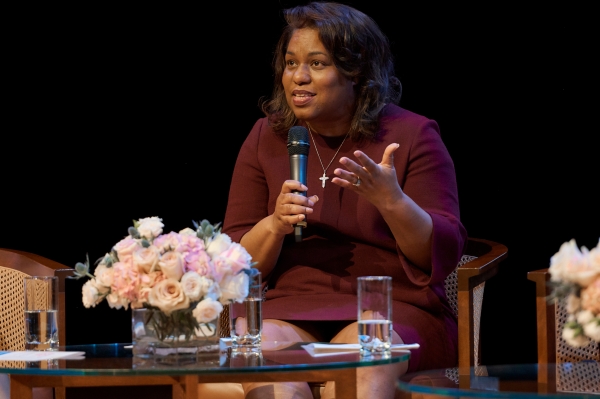 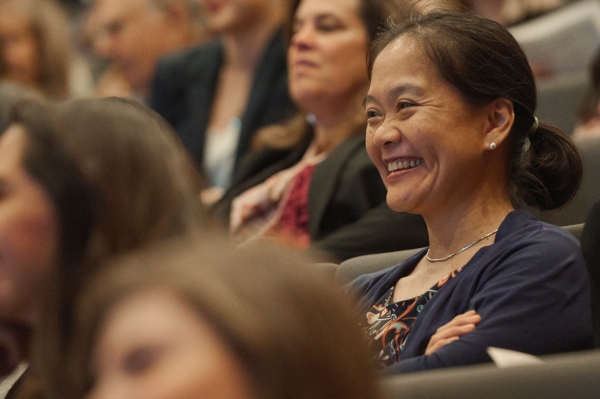 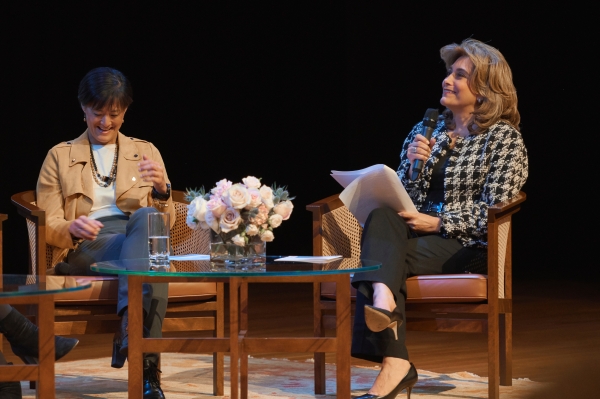 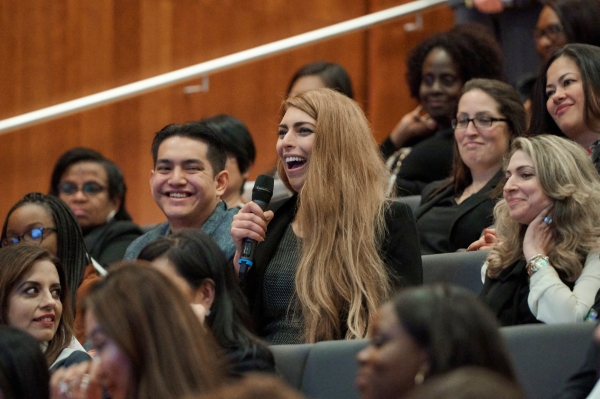 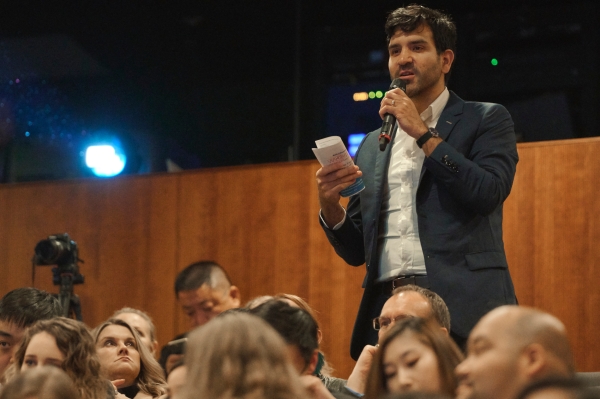 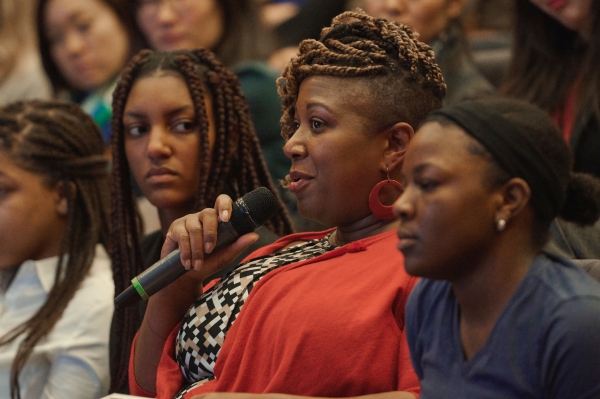 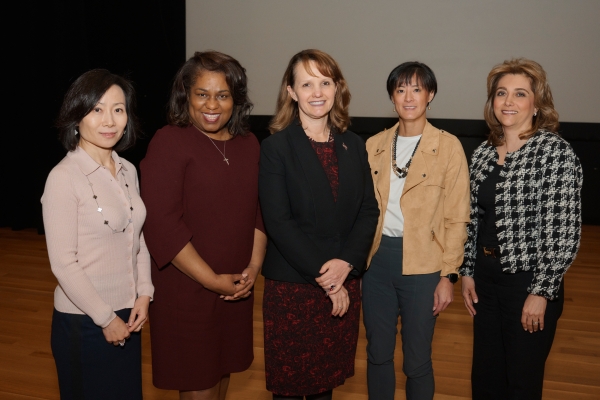 The panelists shared how they developed interest in STEM and gave suggestions on how to cultivate that interest into careers. Despite a growing emphasis on science and math in schools, Harris said she believes one of the largest barriers is the lack of exposure and community support for student-oriented STEM opportunities.

The speakers agreed it’s crucial to expose children at a young age not only to science and math, but also to engineering and technology. Internships, mentorships, coding and robotics clubs, and community labs were highlighted as ongoing efforts by energy corporations to introduce younger generations to STEM interests.

Key to recruiting talent for STEM careers is a diverse workforce. The panelists acknowledged that while incredible progress has been made to bring more diverse backgrounds into entry-level STEM careers, challenges remain at the senior leadership level.

Overcoming stereotypes as a woman — especially as an Asian woman — can be part of those challenges. Chan, sharing a personal anecdote, recalled a time when she was told she lacked “leadership presence.” She said her own leadership style can mean she’s not always the loudest person in the room, but rather is the person whose presence empowers the team to achieve their goals.

The panelists also challenged perceptions that STEM careers mean tedious desk work. Schwarze emphasized her daily use of economics in addition to her geology degree, and highlighted her widespread travel across the globe as an integral part of her job.

Toward the end of the program, an audience member’s question prompted speakers to address the necessity of incorporating creative thinking in STEM. Dr. Kong discussed how creative thinking has been vital in problem-solving, citing as an example solutions to reduce emissions.

Jennifer Chan is head of Planning and Business Development for ExxonMobil Chemical Company. In this role, she is currently leading the company’s culture transformation effort in addition to overseeing mergers and acquisitions, financial planning, and strategy development. Jennifer earned her bachelor’s and master’s degrees in chemical engineering practice from the Massachusetts Institute of Technology in 1992/1993. She joined Exxon in 1993 at the Baton Rouge Chemical Plant in Louisiana, and has since worked in a variety of planning, marketing, supply, and manufacturing positions, including Singapore Chemical Plant technical manager and Mont Belvieu Plastics Plant site manager. She has lived in Texas, London and Singapore, and has worked in ExxonMobil’s gas & power and refining & supply companies in addition to the chemical company. Jennifer is a long-standing active member of the Chemical Women’s Leadership Team which strives to grow and retain female talent across all levels and functions of ExxonMobil Chemical Company through visible female leadership. She is also an active mentor in ExxonMobil’s Women’s Interest Network, and serves on the board of advisors of ExxonMobil’s employee veterans’ advocacy support organization.

Paula Harris is a 30-year executive with Schlumberger and she currently holds the title of Director, Global Stewardship. Paula has received numerous recognitions, including being named Black Engineer’s “50 who make a Difference,” “Key Women in Energy,” “Greater Houston Women’s Chamber-Woman of Distinction,” and the “Women of Color in Technology” award. She has been appointed to the Theater Under the Stars (TUTS) board, Space Center Houston Board, Petroleum Club of Houston Board, and the Menil Development Board. Paula was elected to the Houston Independent School District Board of Education in 2007 and also served as board president; the district was recognized twice by the White House under her leadership. Paula has been instrumental in implementing robotics and coding clubs throughout the region including in Houston ISD, Fort Bend ISD, and City of Houston after-school programs. Paula’s first book is For Sister: The Guide for Professional Black Women, which was published in 2003. Paula’s latest book is a children’s book entitled When I Grow UP, I Want to Be an Engineer. This book has been translated into 4 languages and over 100,000 copies of this popular book have been distributed by the Houston Children’s Museum, the Offshore Energy Museum, the San Jacinto Council of Girl Scouts, Houston ISD, Ft Bend ISD, Alvin ISD, and Jack and Jill of America. Paula is a graduate of Texas A&M University with a degree in Petroleum Engineering and a Master’s in Education Emerging Technology.

Dr. Janet Kong is the CEO, BP Integrated Supply and Trading, Global Oil – Americas, for BP’s oil trading and supply business headquartered in Chicago, Illinois. Global Oil Americas reliably delivers energy supplies around the world, while offering financial services that help customers guard against fluctuations in energy prices. Dr. Kong’s team works with a wide range of companies, as well as other BP businesses, to buy, sell and transport commodities such as natural gas, natural gas liquids, power, crude oil, chemicals, sulphur and refined products. Dr. Kong joined BP in 2013 as the head of market analysis in global oil eastern hemisphere (GOEH) before her appointment as CEO, GOEH for Integrated Supply & Trading, overseeing BPs supply and trading business in Asia Pacific and the Middle East. In addition to previous roles as managing director at China International Capital Corp and managing director of global commodities at Goldman Sachs, Asia, Dr. Kong has also worked for the Hong Kong Monetary Authority (HKMA) and the International Monetary Fund (IMF) in Washington DC as a country economist. Dr. Kong holds both a Ph.D. and an M.A. in economics from Georgetown University and has written papers and publications for the IMF, the World Bank and HKMA.

Liz Schwarze assumed the role of vice president of Global Exploration for Chevron Upstream in April 2018 and is responsible for the company’s worldwide exploration program. Liz joined Chevron in 1990 as a development geologist in the Gulf of Mexico and has held positions of increasing responsibility in exploration, reservoir management, finance and business planning. She has worked on projects in Venezuela and Angola as well as the San Joaquin Valley and Permian Basin areas of the United States. Recent roles have included general manager of Exploration for Chevron Africa and Latin America Exploration and Production Company, based in Houston; general manager of Exploration for Chevron Asia Pacific Exploration and Production Company, based in Singapore; and division manager of Exploration and Reservoir Characterization Services for Chevron’s Energy Technology Company, also in Houston. Liz holds a bachelor’s degree in geology from Duke University, a master’s degree in geology from The University of Texas at Austin and a master’s in business administration from Tulane University. She is a member of the American Association of Petroleum Geologists, the Society of Exploration Geophysicists and the Society of Petroleum Engineers.

Niloufar Molavi leads PwC’s Global and U.S. Energy practice serving Global energy clients in the oil and gas industry. She is responsible for all client services – assurance, advisory, and tax. From 2011 to 2016, she served as the Greater Houston Market Managing Partner for the Greater Houston Market. From 2009 to 2011, she served on PwC’s leadership team as the firm’s Chief Diversity Officer. In this role, she oversaw the firm's diversity strategy, and all of its related programs and initiatives. With 25 years of tax experience with PwC, Niloufar has served a wide range of energy companies both in the U.S. and abroad, advising clients on international and U.S. tax structuring, mergers, acquisitions, and potential public offerings. Niloufar earned her bachelor's degree in Accounting as well as a master's degree in Professional Accounting with a concentration in Taxation from the University of Texas at Austin. She currently serves on the Advisory Board of the McCombs School of Business and Accounting Advisory Council at the University of Texas. She serves as the Chair of the board of Dress for Success Houston and Awty International School. She also serves on the non-profit boards of the Alley Theatre, Central Houston, ALPFA, and the Greater Houston Partnership.

With 13 locations throughout the world, Asia Society is the leading educational organization

promoting mutual understanding and strengthening partnerships among the peoples, leaders, and institutions of Asia and the rest of the world. Asia Society Texas Center executes the global mission with a local focus, enriching and engaging the vast diversity of Houston through innovative, relevant programs in arts and culture, business and policy, education, and community outreach.