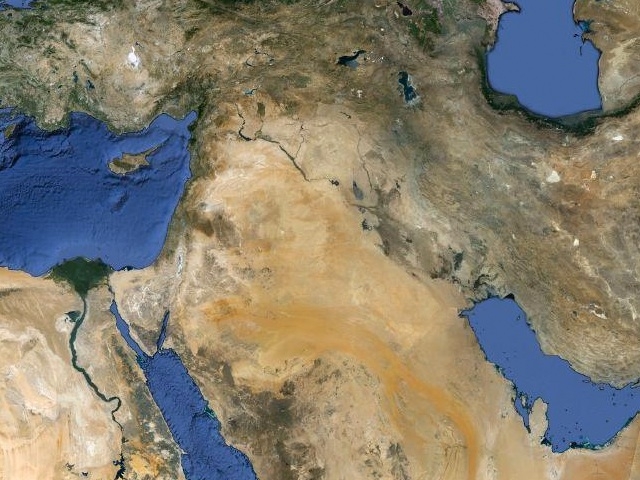 Arabic is the official language of some fifteen countries (Algeria, Egypt, Sudan, Iraq, Syria, Saudi Arabia, Morocco, Bahrain, UAE, Oman, Yemen, Kuwait, Jordan, Libya, and Tunisia) and over 200 million people are estimated to speak some dialect of Arabic. The geographical center of the language can be said to encompass the northernmost part of Africa from Mauritania to Egypt, the Levant, the Arabian Peninsula, and Iraq. In addition to the Arab countries, in which Arabic speakers are concentrated, large numbers of Arabic speakers live in Iran and France (600,000 speakers each), while a substantial number of speakers live in the Comoroes, Tanzania, other parts of Africa, the Palestinian territory and Israel. (Source: http://www.lmp.ucla.edu/Profile.aspx?LangID=210&menu=004)

Arabic has been listed as a critical language by the American State Department since 9/11/2001 because of our strategic business and security interests in the Arab-speaking world. We are currently engaged in a war in two nations where Arabic is either the national language or commonly spoken. The Arab world contains two-thirds of the world’s oil reserves, as well as serves key player in the world financial market. In 2007 the United States exported $37,845 million to the 15 Arabic speaking nations. This amount has increased by 446 percent since 1985. In 2007 the United States has imported $80,236 million in goods from these countries, an increase of 1527 percent since 1985.

Arabic is a Semitic language of the Arabo-Canaanite subgroup (Ruhlen 1987). Arabic and Canaanite—which includes Hebrew, Phoenician, and several extinct languages—are distantly related to Aramaic. Other even more distant relatives are the Semitic languages of Ethiopia and Eritrea (such as Amharic and Tigrinya) and Akkadian, an extinct language once spoken in Mesopotamia. Semitic is a branch of the Afro-Asiatic family of languages, the bulk of which are spoken in Africa. Afro-Asiatic has several major branches: Semitic, Berber, Chadic (including languages such as Hausa), Cushitic (including languages such as Somali), and Ancient Egyptian, whose modern descendent, Coptic, is preserved as a liturgical language. It should be noted that the minority languages collectively known as South Arabian spoken by about 50,000 people altogether in Oman and Yemen are more closely related to the Semitic languages of Ethiopia and are not dialects of Arabic.

Western Arabic encompasses the Arabic spoken colloquially in the region of northern Africa—often referred to as the Maghrib—from Morocco to western Libya and in adjacent African countries to the immediate south. In the countries of the Maghrib, many speakers of Arabic have been schooled in French and are more likely to use French rather than Standard Arabic for reading and for written communication.

Eastern Arabic, sometimes referred to as Mesopotamian Arabic, includes the Arabic dialects spoken in a large region encompassing North Africa (Egypt and Sudan), the Middle East (Syria, Iraq, and the Arabian Peninsula), and Arabic speaking communities in Asia (Bateson 1967). The variety of Eastern Arabic profiled on our site is Egyptian.

Maltese is a Semitic language spoken in Malta. It is essentially a dialect of Arabic, being closest to Tunisian and Algerian Arabic, but is different from the other Arabic dialects in that it has been under heaving influence of Italian and Sicilian for much of its history and due to the fact that Maltese is not influenced by Standard Arabic. Maltese is written in a Latin-based orthography, and the Maltese are further differentiated culturally from other Arab societies by the fact that they are overwhelmingly Roman Catholic and that they were under European rule from 1090 to their independence in 1964. As a national language with a long written history, Maltese is the only spoken dialect of Arabic, which is used in newspapers and books. Maltese is spoken by virtually all of Malta's 400,000 inhabitants, and by a significant number of emigrant speakers living in other countries, including 85,000 speakers in Australia.

Arabic was originally the language of the nomadic tribes of the northern and central regions of the Arabian Peninsula. It was only during the Muslim conquest and expansion of the seventh and eighth centuries that Arabic spread into the areas where it is now spoken. In the process, it largely supplanted the indigenous languages of the conquered regions, including Aramaic in the Levantine, Coptic in Egypt, Berber in North Africa, and Greek in the former Byzantine Empire.

In written form, some early inscriptions exist. Arabic of the pre-Classical period is found in inscriptions of central and northwestern Arabia, with Classical Arabic itself appearing in inscriptions dating from at least the fourth century. Pre-Islamic poetry, the Koran from the first half of the seventh century, and the language of contemporary Bedouin provided the basis for the codification of the language during the eighth and ninth centuries. Modern Standard Arabic, the official language of all Arab countries, is modeled on Classical Arabic, which exerts a continuing influence on the form and style of its modern variant.

The linguistic development of the vernacular forms of Arabic are controversial, but one theory which has a lot of support, argues that the colloquial dialects grew out of a wide-spread koine or heavily dialectally mixed lingua franca, which was used during the Muslim conquest; subsequent regional differences are explained by specific geographical and regional indigenous influences and normal change over time (Bateson 1967:94-97). (Source:  Language Materials Project http://www.lmp.ucla.edu/Profile.aspx?LangID=210&menu=004)

Modern Language Association data show that college and university enrollments in Arabic have increased by 126.5% between 2002 and 2006, from 10,584 to 23,974. The number of institutions of higher learning offering Arabic has also nearly doubled; we received reports from 466 programs in 2006 against 264 in 2002. Despite this only 1.5% of students studying a foreign language in America higher education study Arabic. (Source: Enrollments in Languages Other Than English in United States Institutions of Higher Education, Fall 2006 by Nelly Furman, David Goldberg, and Natalia Lusin)

There are 17 National Resource Centers and 17 FLAS INSTITUTIONS that have received FLAS funding for Middle Eastern languages in 2007. 182 FLAS Fellowships have been allotted for Middle Eastern languages at these institutions totaling a budget of $4,015,000. Arabic is the dominant language of the Middle East and is offered at all these institutions under the FLAS grant. (Source: http://www.ed.gov/programs/iegpsflasf/awards.html)

579 students enrolled in an Arabic Language course in grades 7-12 in 2000 According to a survey conducted by the American Council on Teaching Foreign Languages entitled, Foreign Studies Enrollment in Public Secondary Schools. Less than .01 percent of all K-12 students study Arabic. Report available at: http://aappl.actfl.org/sites/default/files/pdfs/public/Enroll2000.pdf

To provide comparison, America’s exports for this same period to the five nations with English as their national language was $356,436 million, which has increased by 513% since 1985. In 2007 the United States has imported $434,481 million in goods from these countries, an increase of 446 percent. (Source: http://www.census.gov/foreign-trade/balance/index.html)

In response to the 9/11 terrorist attacks, the National Foreign Language Center (NFLC) convened in January 2002 with the leaders from the intelligence, defense, diplomatic, and education communities to identify the deficiencies in language resources and establish the critical need for language learning to stem the war on terrorism. Increasing language acquisition of critical languages has been one of the main approaches to bolstering security since 2001. The National Security Agency, the Pentagon, State Department and major intelligence units of the US government have cited Arabic as a critical language because of the central role it has played in geo-politics in the last quarter century. The Arab world is the locus of two-thirds of the world's known oil reserves. The NFLC explains it has become clearer than ever that events in the Middle East affect our daily lives and only through the study of Arabic can one gain necessary insight into the cultural, religious, and political forces, which motivate the inhabitants of that vital region.

Arabic is also one of the six official UN languages.