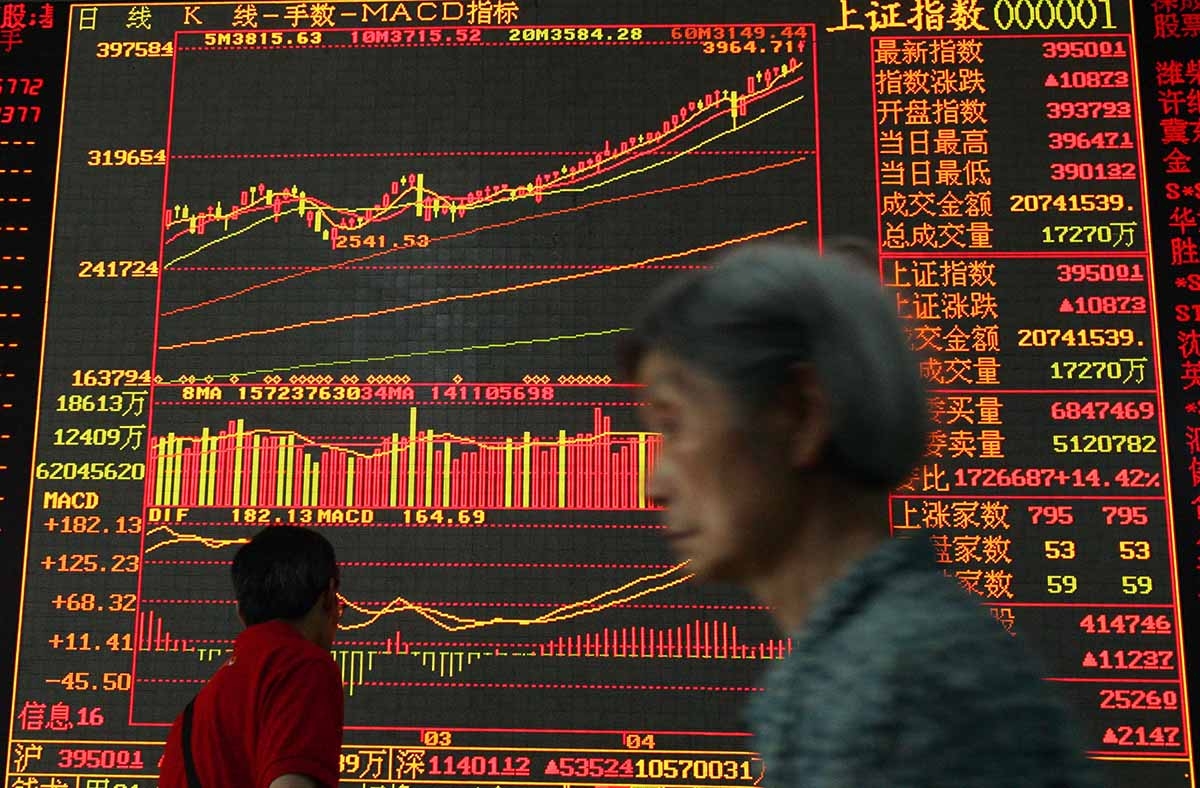 An investor walks past an electronic screen displaying stock index at a securities company in Wuhan, China. (China Photos/Getty)

In the fall of 2013, the Chinese Communist Party (CCP) unveiled an ambitious economic reform agenda at its Third Plenum under which General Secretary Xi Jinping vowed that the markets would play the “decisive role.” At the time, Premier Li Keqiang invited foreign observers to evaluate the progress of these reforms.

Today, the Asia Society Policy Institute and Rhodium Group are taking Premier Li up on that invitation by launching the China Dashboard — a tool that tracks China’s reform progress based on its own stated objectives with interactive data visualizations in 10 different policy clusters. The data will be updated regularly with new analysis each quarter.

As Xi and Li conclude their first five-year term in office and begin a second, the dashboard characterizes the Third Plenum reform program generally as “stalled” with a few bright spots. Of the 10 policy clusters, only one area has made clear progress, with five remaining neutral and four regressing. 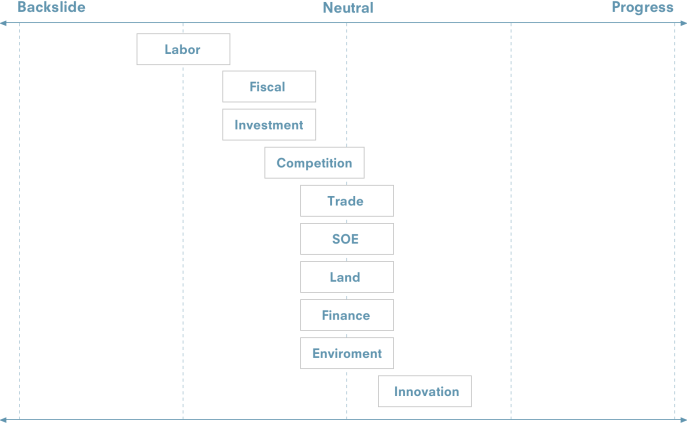 Here are three takeaways from the current data.

As manufacturing-led growth slows due to rising wages, and infrastructure investment experiences diminishing returns, the economic model that has propelled China for the past four decades is running out of steam. Becoming a more innovation-driven economy is thus crucial for continued growth. The dashboard suggests that this is currently one bright spot in China’s reform process.

One measure the dashboard uses is “Innovative Industry Share in Industrial Value-Added,” which shows how much of China’s overall industrial GDP is occupied by innovative industries. A rising percentage suggests a structural shift in the economy toward more innovation-based growth.

This measure has been rising for seven consecutive quarters — reaching a peak of 32.48 percent in 2017Q2 — which is nearing parity with the United States. 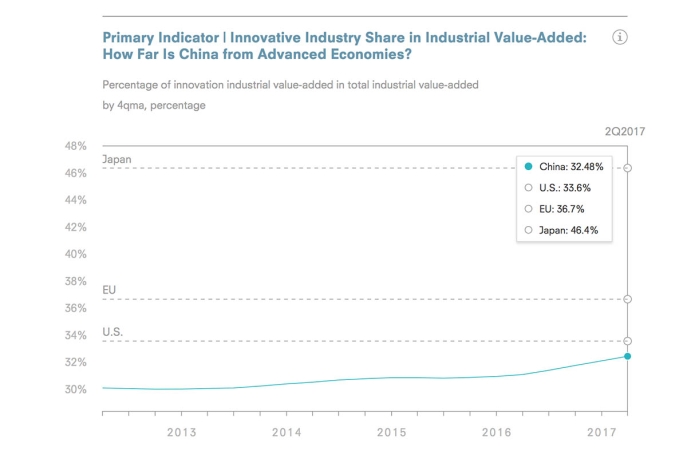 “Gauged by changing industrial value-added (IVA) shares, China is making solid progress toward becoming a more innovation-oriented economy,” the dashboard notes, adding, though, that this growth spurt is likely to be temporary.

Strong cyclical ups and downs in IVA growth are evident over our five-year window for all of China’s innovative sectors, suggesting that macroeconomic conditions are driving the story at least as much as specific industrial policies. The prevalence of these cyclical patterns suggests that current innovative IVA levels are at the top of a five-year range and are unlikely to be sustained.

If Xi’s vow to let the market play a “decisive role” in the economy is sincere, there is perhaps no arena more in need of disruption than the state-owned sector. China’s large-scale privatization and consolidation of SOEs in the 1990s was a crucial — if often painful and disruptive — driver of the country’s sustained growth.

But many SOEs remain today, and they tend to be far less efficient and profitable than their private sector counterparts — often staying afloat on the back of unsustainable state-financed debt. So opening the state-owned sector to more competition and greater market accountability was a major part of the 2013 reform agenda.

The China Dashboard’s primary indicator for progress on this front is SOEs' share of revenue in certain industries. 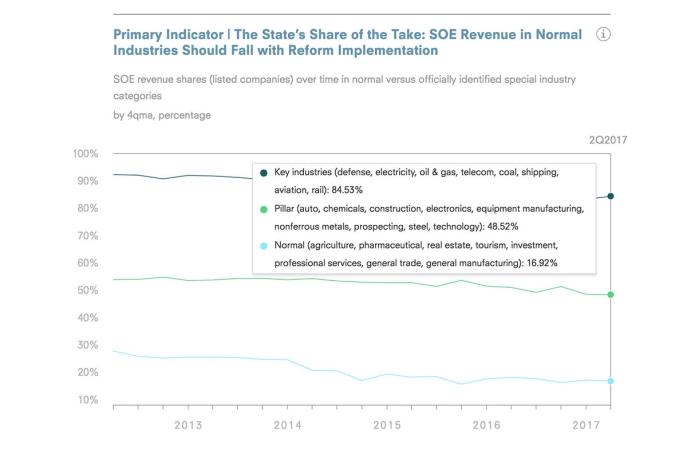 The analysis notes that SOE’s revenue share has actually gone up in some industries and remained relatively flat in others. Overall there’s been “no real SOE reform progress on the ground,” though policy movement has been “impressive” in 2017, suggesting there may be progress in the near future.

"Important SOE policy reform developments occurred in the second quarter [of 2017], even if these have not yet translated into outcomes. In 2015-16, SOE reform largely stalled despite frequent State-owned Assets Supervision and Administration Commission announcements on paper. Weak market conditions, priority attached to target GDP growth numbers, and emphasis on stability left limited space for SOE reform other than a handful of government-directed mergers."

Since 2012, China has been hemorrhaging millions of workers each year as the large population of Mao-era Baby Boomers begins to yield the workforce to the artificially small One Child Policy-era Millennials. As a workforce shrinks, it's important for the remaining workers to become more productive and achieve greater per capita economic output via improved skills and greater mobility.

However, China appears to be moving backward on these goals according to the dashboard’s indicators

One measure looks at how fast worker wages are rising compared to overall GDP growth. Wages that rise faster than GDP growth would suggest improving individual productivity and greater economic equality. However, the reverse is happening. 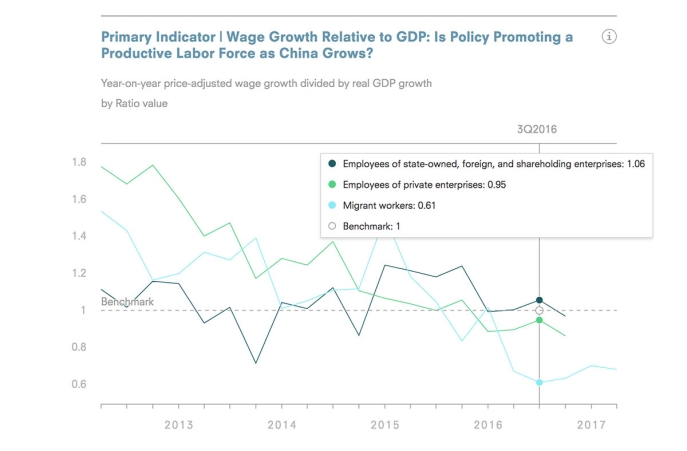 Migrant worker wages had a growth rate of only 68 percent of overall GDP growth in the second quarter of 2017. This was up from a low of 61 percent last year but marked a major drop from 2012 quarter 2, when wages rose 54 percent faster than overall GDP growth.

Other dashboard indicators showed that job creation similarly slowed over the same period, the income gap between rural and urban households widened, and there are mismatches between where workers are and where they’re most needed. Western China, for instance, has 126 job openings for every 100 applicants. “Infrastructure projects under the Develop the West rubric and Belt and Road Initiative (BRI) boost investment in inland China,” the dashboard says. “But do not make the region more attractive to job seekers or address labor mobility impediments.”

One major barrier to labor mobility is China’s hukou residency policy, which restricts internal migration and largely ties access to social services like healthcare and education to a citizen's hometown. In the dashboard’s labor policy analysis, it notes that proposed policy measures that grant urban hukou to millions of rural residents and provide greater social services for migrant workers would ease inequalities and be "a major accomplishment."

Overall, the dashboard concludes that the current data suggests a pessimistic outlook for China’s reform program:

Policy activity, a precursor of future outcomes, is mixed, with continued public displays of policy resolve, but with limited fundamental progress on the ground. China‘s 2013 reform program is key to long-term, sustainable economic growth, and if the economy does not move forward, both China’s GDP potential and its contribution to common development externally will be depleted. Given the accumulated impact from past growth choices, and the current paucity of reform movement, longer-term prospects for growth are therefore trending negatively.