AidData Report in Partnership with ASPI 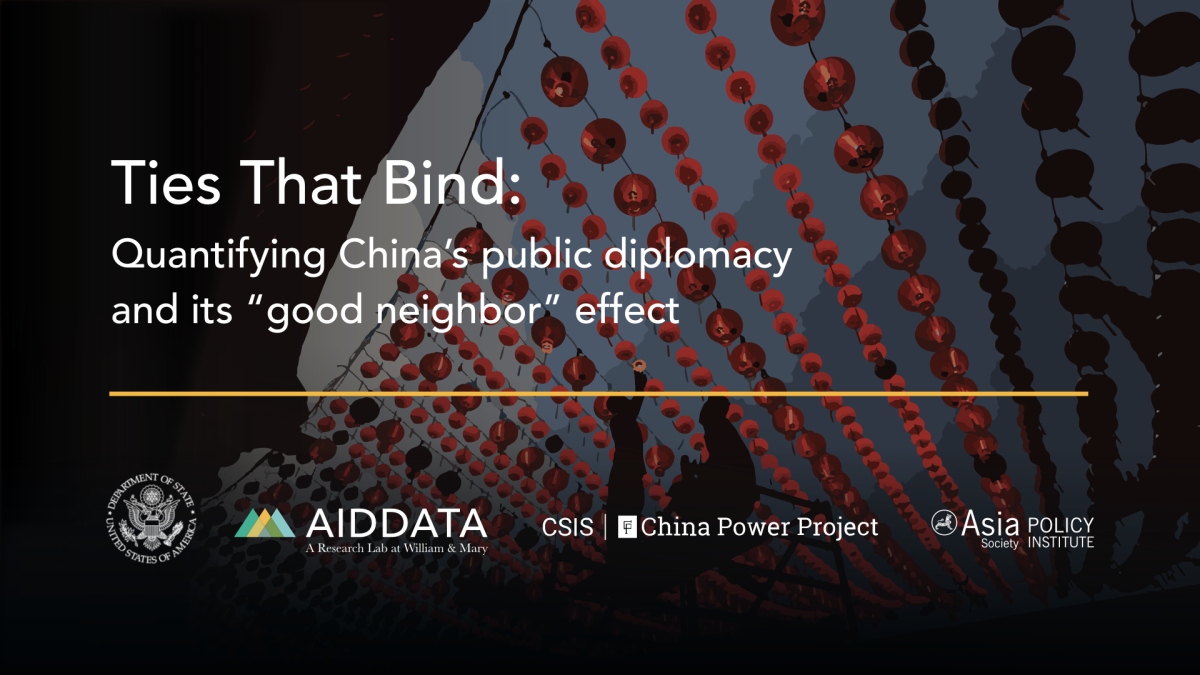 China has a long history of using public diplomacy (PD) to bolster its status internationally and tell its story to the world. Nonetheless, there is a growing consensus that China has dramatically increased the volume and sophistication of its public diplomacy efforts under President Xi Jinping. While China’s infrastructure investments are in the media spotlight, Beijing employs a much wider range of public diplomacy tools — from people-to-people exchanges and cultural symposia to official visits and information broadcasting — which aim to strengthen bilateral ties and bolster China’s international image.

However, the impact of this engagement is less clear. Soft power is notoriously hard to measure in practice and in the absence of empirical data, it is easy to overstate, or misstate, the degree to which China’s activities are advancing its interests with regional neighbors. Historically, there has been a lack of quantifiable data to assess the volume, direction, and downstream effects of China’s public diplomacy efforts. Consequently, the bulk of previous studies rely exclusively on qualitative metrics that offer valuable context-specific insights, but fall short of giving scholars and practitioners a way to systematically analyze how and where China deploys its public diplomacy efforts in the East Asia and Pacific region. This project, led by AidData, together with partners — the Asia Society Policy Institute and the Center for Strategic and International Studies — attempts to close that gap and quantify key metrics of China’s public diplomacy activities in East Asia, as well as how they are received by other Asian countries.

Drawing on extensive quantitative and qualitative data from this project, AidData has published a report entitled, "Ties That Bind: Quantifying China's Public Diplomacy and Its 'Good Neighbor' Effect." It paints a comprehensive picture of China’s multi-year, forward-leaning strategy across the region, which stretches from Myanmar to Samoa and from Japan to Australia, covering 27% of the world’s population. Ties That Bind quantifies five instruments of China’s public diplomacy program, from financial investments and official visits targeted toward a country’s elites, to mass-market appeals to citizens via Confucius Institutes, sister cities, and information broadcasting. The report examines how foreign publics and leaders perceive these overtures, and assesses whether they are helping Beijing achieve its objectives.

AidData finds that China is increasing and diversifying its public diplomacy efforts, doing so strategically rather than opportunistically, and calibrating its efforts according to a range of factors and circumstances. The report suggests that as China’s footprint grows, the region’s citizens increasingly see China as highly influential, and leaders value it as a supply of ready capital —though not as many want to emulate its development model. However, a number of factors continue to create friction with China’s neighbors, potentially undermining these gains: disputes in the South China Sea, the perception that China does not always follow through on its infrastructure promises, and the specter of indebtedness as countries struggle to repay mounting debts to Beijing.