The Mekong Region in the Wake of COVID-19: Challenges and Prospects | Asia Society Skip to main content

The Mekong Region in the Wake of COVID-19: Challenges and Prospects 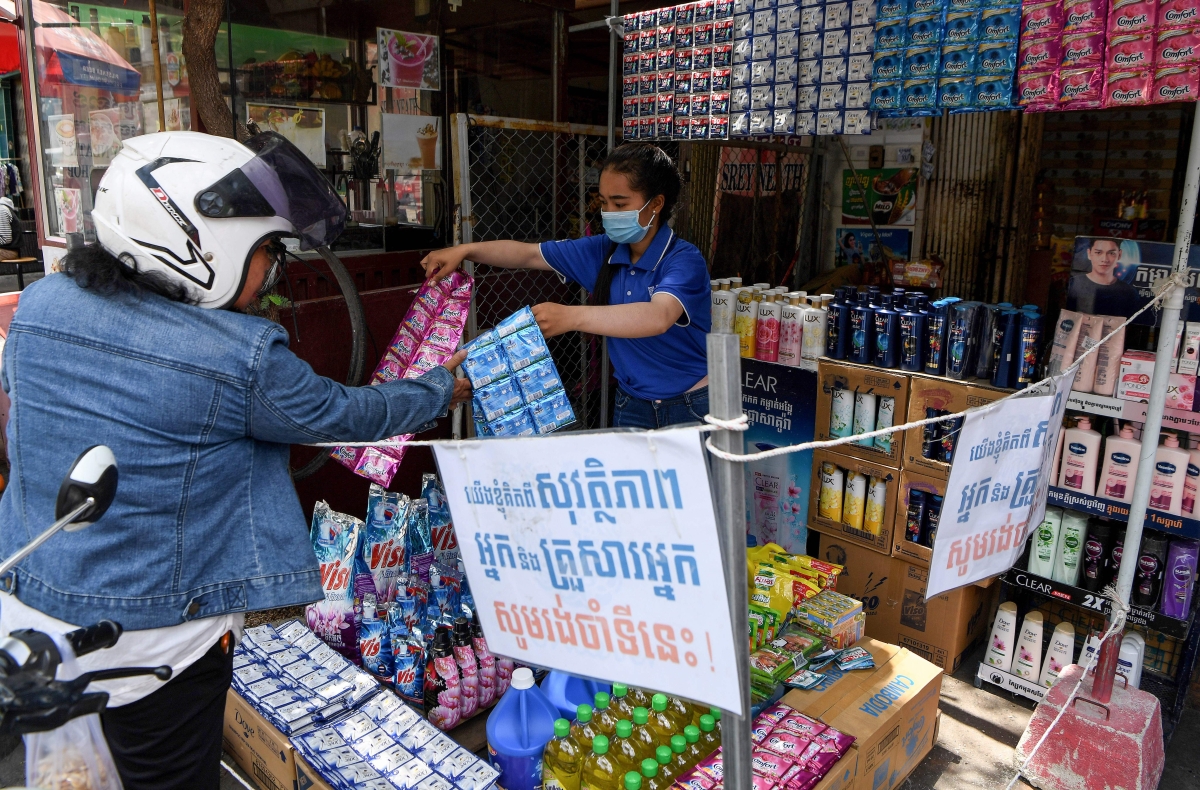 A vendor shows sachets of hair shampoo to a customer from a shop that has been marked off to allow for social distancing, as a preventive measure against the spread of the COVID-19 novel coronavirus, in Phnom Penh on May 27, 2020. (Tang Chhin Sothy/ AFP/ Getty Images)

The Mekong countries of Cambodia, Lao PDR, Myanmar, Thailand, and Vietnam have been experiencing the impacts of the Covid-19 pandemic at varying degrees. As of 12 December, the five had accumulated 113,219 cases with total deaths amounting to 2,340. Lao PDR had the lowest rate of infection with 41 cases and zero mortality. Myanmar had the highest rate of infection with 107,215 cases and 2,245 deaths.

With the exception of Thailand, all the Mekong countries are vulnerable to health risks and hazards due to their relatively weak healthcare infrastructure. So far, the Mekong region has managed the pandemic outbreak better than maritime Southeast Asia. Crisis leadership, multi-stakeholder partnership, and international cooperation have been the defining factors in effectively managing this major public health crisis.

The measures adopted by the Mekong countries have included restricting people’s movements and large-scale gatherings, contact tracing and testing, as well as aggressive public awareness campaigns. These measures have been carefully tightened or loosened depending on the public health risk assessment and in order to mitigate their economic impact.

The economy of the Mekong region is estimated to contract at varying levels depending on the country’s openness and resilience of its economic structure. According to the Asian Development Bank (ADB), Thailand has been worst hit with a contraction of 8.3 percent followed by Cambodia at 4 percent, and Lao PDR at 2.5 percent. Myanmar and Vietnam are projected to sustain positive growth this year at 1.8 percent.

The region is predicted to experience a remarkable economic rebound in 2021 with 5.9 percent for Cambodia, 4.5 percent for Lao PDR, 6 percent for Myanmar, 4.9 percent for Thailand, and 6.3 percent for Vietnam. The post-Covid-19 economic recovery for these countries is premised on the speed and effectiveness of their national economic adjustment as well as on level of regional integration.

The five governments have introduced a series of economic stimulus packages including financial assistance to the poor and other vulnerable groups, unemployment benefits, tax incentives, financial support to affected industries, reskilling and upskilling, and digital transformation support.

The pandemic has accelerated the speed of digitalization across the region. Both the public and private sectors have adapted to and adopted digital technology to overcome the challenges and disruptions caused by the pandemic. Thailand and Vietnam have significantly invested in digital infrastructures and capacity while Cambodia, Lao PDR, and Myanmar have begun to embark on related policy development. Cambodia is finalizing its digital economy policy framework and digital government policy. In November, an e-commerce strategy was introduced and a capacity building program on e-commerce started in early December.

The state’s capacity to curb the pandemic and restore the economy critically defines the legitimacy of governments, regardless of political ideology or system. Overall, the handling of the pandemic has contributed to the reaffirmation of regime legitimacy across capitals in the Mekong region. Crisis leadership including crisis management and communication has played a key role in performance legitimacy. In authoritarian regimes where civil and political rights are under constant pressure, the preservation of social, economic, and public health security is fundamental to sustain public trust in the government.

The pandemic has accentuated pre-existing socio-economic inequalities. Since inequality is often the root cause of political instability, the key challenge for governments in the region has been to bring about an inclusive recovery. In Cambodia, the government could only afford to provide unemployment benefits to workers in shuttered or suspended factories and to those in the travel and tourism sectors. The most vulnerable groups are those working in the informal economic sector without access to social safety nets or financial support. Women are also disproportionally affected.

The state alone cannot respond to the worst economic recession in decades. Recovery requires the participation of the private sector and civil society. This opens political space for non-state actors to get involved. In turn, a multi-stakeholder and whole-of-society approach have emerged as norms of political governance, contributing to regime legitimacy and political stability.

China has taken advantage of this opportunity by launching its so-called “mask diplomacy” and “vaccine diplomacy” to ratchet up influence or soft power in the region. China sent its first medical team to Cambodia in March, after it managed to control the pandemic at home. Subsequently, there were several rounds of medical experts sent to the region together with medical supplies such as masks and personal protective equipment (PPE).

To counter China, the United States upgraded its Lower Mekong Initiative to the Mekong-US Partnership in September 2020 with a pledge to provide USD1.2 billion for health programs. Japan also stepped up its support to the Mekong countries in combatting the pandemic. At the 12th Mekong-Japan Summit in November 2020, Japan committed USD125 million worth of grant assistance in the form of medical supplies and equipment, as well as technical cooperation.

To navigate geopolitical rivalry, Mekong countries are strengthening their home-grown Ayeyawady-Chao Phraya-Mekong Economic Cooperation Strategy (ACMECS). At the 9th ACMECS Summit in November 2020, the leaders agreed to establish a Secretariat and common fund for ACMECS in order to strengthen regional ownership and to better coordinate and facilitate regional cooperation projects. Thailand and Cambodia have committed USD200 million and USD7 million, respectively, to the common fund.

The US-China competition in the Mekong will continue to intensify, particularly in soft power projection including economic power. To earn the region’s trust, the two powers must demonstrate leadership by empowering and enabling the Mekong peoples to realize their own potential, and by supporting the Mekong countries in recovering quickly, inclusively, and sustainably from the pandemic-induced economic fallout. Both China and the United States need to understand that actions matter more than words.