Mao and Markets: The Communist Roots of Chinese Enterprise 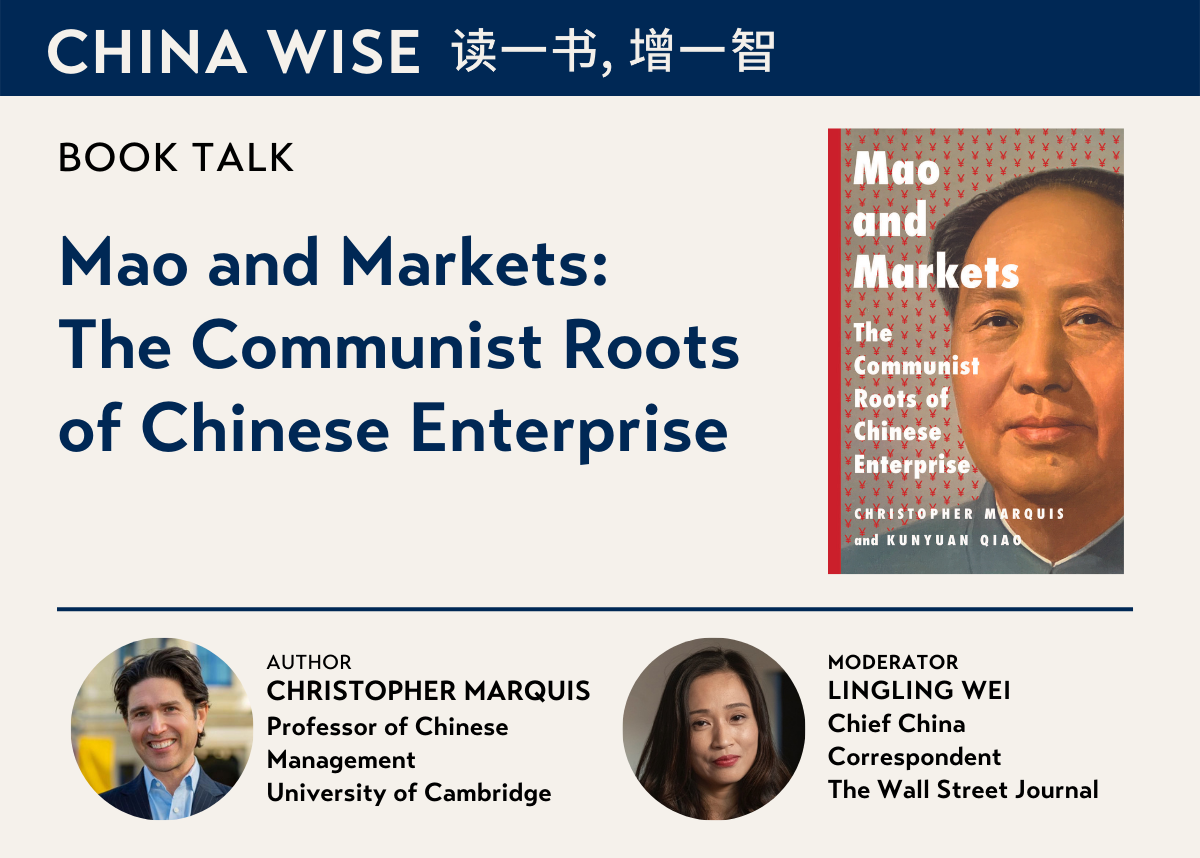 As China opened up its economy over the past four decades, conventional wisdom held that the country’s growing embrace of free markets would lead to a more liberal society and the shedding of a state-controlled economy. Instead, China’s unprecedented economic growth has positioned state capitalism as a durable foil to the orthodoxy of free markets, to the confusion of many in the West. At the 20th Party Congress in Beijing in October, Xi Jinping — who appears to favor a Party- and state-centric model for the Chinese economy — was appointed to a third five-year term as the all-powerful general secretary of China’s Communist Party. What does this mean for the recovery of the Chinese economy? Could it benefit China to return to some of the ideological principles spearheaded by Mao Zedong? And how much of China’s decades of economic success can be credited to Mao and Maoism?

Join us in person event on December 12 with Christopher Marquis, Sinyi Professor of Chinese Management at the University of Cambridge, as he speaks with Lingling Wei, Chief China correspondent at The Wall Street Journal, about his new book Mao and Markets: The Communist Roots of Chinese Enterprise.

The event marks the fifth in the China Wise book series, co-organized by the Asia Society Center on U.S.-China Relations and Asia Society Policy Institute’s Center for China Analysis.

Books will be available for sale at the event.

Christopher Marquis is the Sinyi Professor of Chinese Management at the University of Cambridge Judge Business School. He is the author the award winning book Better Business: How the B Corp Movement is Remaking Capitalism and in November 2022 published Mao and Markets:The Communist Roots of Chinese Enterprise. His research and writing focus on how businesses are creating a more resilient and sustainable capitalism by focusing on the elusive triple bottom line of environmental, social and financial performance, and he also studies entrepreneurship and market development in China. Prior to joining Cambridge he worked at Cornell for over 6 years, and Harvard for over 11 years, where he developed an award-winning course on social entrepreneurship. He is the author of more than 20 peer-reviewed academic articles and more than 50 Harvard business cases on topics related to sustainable business. Marquis earned a PhD in sociology and business administration from the University of Michigan and BA in History from Notre Dame. Before his academic career, he worked for six years in the financial services industry, most recently as vice president and technology manager for a business unit of J.P. Morgan Chase.

Lingling Wei is the award-winning Chief China correspondent for The Wall Street Journal and co-author of "Superpower Showdown," a history of the U.S.-China trade and economic stand-off. Hailing from a farm province in southeastern China, she came of age as a journalist in New York in the early 2000s and returned to China in early 2011 to report on changes in her homeland. From then until 2020, when China expelled Journal reporters including Lingling, she had covered all aspects of China's economy, its opaque policy-making process and key decision-makers. She has won many awards for her China coverage. In 2021, she's among a team of reporters and editors whose work was a Pulitzer Prize finalist. Currently living in New York, Lingling continues to focus on the intersection of the Chinese economy and politics.