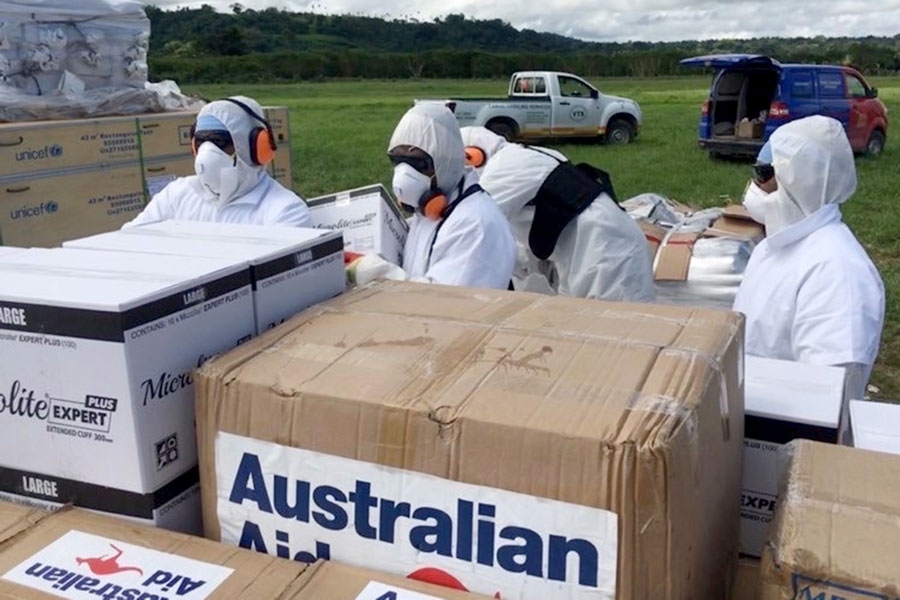 A Royal Australian Air Force C-17A Globemaster III from No. 36 Squadron at RAAF base Amberley delivered 12 pallets of humanitarian aid to Port Villa, Vanuatu, in support of the disaster relief efforts of the Government of Vanuatu. (DFAT)

COVID-19 has only catalyzed the growing geopolitical interest in the Pacific Islands. In recent months, donors have been tripping over each other to provide medical supplies and additional financial support to shore up the region in the event of an outbreak of the virus. But at the same time, this has only exacerbated fundamental cleavages in the delivery of aid to the Pacific, which left unaddressed will only hold back the region’s development over the long-term.

The Pacific has always had a messy web of donor footprints. Australia and New Zealand have been an obvious and constant presence. But alongside this, there has been a split between the Pacific Islands that recognize China versus those that recognize Taiwan — often intertwined with an equally clandestine and creative tussle to shift countries from one ledger to the other. On top of this, colonial relationships and ongoing Compact agreements mean that the support of some big powers loom large in some parts of the region, while being entirely absent in others. And in more recent years, new players such as the European Union have also stepped into the ring.

At one level, the fact that the Pacific’s development indicators continue to rank well behind those of sub-Saharan Africa has helped avoid the intense politicization of aid we have seen in recent decades in Eastern Europe, or even parts of Asia. But if current trends continue, and there is no effort to meaningfully coordinate the accelerating amount of aid being pumped into the region, the Pacific is on track for a collision course between its fundamental development needs and the rapidly evolving state of its various bilateral relationships. In just the last few years alone, and without even taking into account concessional loans, China has overtaken the United States and others to become the third largest donor in the region.

The great risk in all this is that what the Pacific needs, it is unlikely to actually receive. Already in recent months we have seen vast amounts of medical supplies be deployed to countries with no outbreaks of COVID-19 at all, while other parts of the region have been left with nothing. Purely donor driven approaches rarely deliver what a recipient needs, especially when it is geopolitics – not development – driving the agenda. The fact that many Pacific countries now have detailed and long-term development strategies should also undermine the ability of donors to continue to get away with simply letting their own terms dictate what funding is allocated where.

The other problem this newfound interest in the region has created is that there is now a myriad of different bilateral aid processes for Pacific countries to navigate. As a result, the Pacific’s best and brightest public servants are forced to spend their days writing proposal after proposal for the same project, rather than actually getting on with delivering them. Take the nation of Tuvalu, where the support it receives from 58 different donor countries makes up more than half of its annual GDP — but where there are only seven people in its government planning office, and just one person in its aid management unit.

With the fight against climate change now touching every development project in the Pacific, the greatest setback in the push to harmonize this development aid in recent years has arguably been Australia’s decision to withdraw from the Green Climate Fund (GCF). The GCF was designed to precisely address this problem by streamlining the delivery of climate finance in places it is needed most, such as the Pacific. No amount of additional bilateral funding from Canberra will make up for this decision that was taken with no outreach to the region and dressed up in the government’s “negative globalism” rhetoric. And with President-elect Biden due to restart the United States’ contributions to the Green Climate Fund, Australia is now completely isolated in its approach amongst the Western donor community.

However, China’s approach is equally as problematic — not least its proclivity for bilateral support and loans over multilateral channels or even cooperative development projects with other donors. It is hard to underestimate the geopolitical kudos that would likely come Beijing’s way from its developing country compatriots if it were to break with its bifurcated dogma and channel some of its own funding through the GCF, or at least try to coordinate more of its own aid in the Pacific with some of the other players on the block.

Australia, which remains the largest donor to the region by far, has a particular interest in helping forge a more coordinated approach amongst the Pacific’s donor community. Allan Behm’s recent suggestion for Australia to convene a donor conference is a good one. But the reality is that until the Australia-China relationship stabilizes and Australia can realize that its own Pacific “Step Up” will continue to be hamstrung by its lack of a genuine climate policy, Canberra’s ability to play this kind of role will remain limited.

Most importantly, such an approach should also be driven by the Pacific itself— not least to ensure everyone is able to easily come to the table. The Pacific Islands Forum’s existing — and increasingly high-level — ‘Dialogue Partners‘ group could provide the basis for this, especially if it can find a way to involve Taiwan which traditionally holds its own gathering on the sidelines. This was, in many ways, the intent of the 2009 Cairns Compact on Strengthening Development Coordination in the Pacific. But a lot of this effort has unfortunately fallen by the wayside in recent years.

The recent establishment of the “Pacific Humanitarian Pathway” at the height of the COVID-19 crisis could therefore hopefully provide a renewed opportunity to get this done, especially if it were to be institutionalized as an ongoing mechanism. Its involvement of foreign ministers has admittedly been helpful for breaking away from some of the bureaucratic strangleholds that occasionally beset the Forum Secretariat as well.

COVID-19 has confirmed that the newfound geopolitical interest in the Pacific shows no signs of abating. But it has also demonstrated that none of this will matter much in the lives of the people of the Pacific unless a better way is found to coordinate the delivery of aid to the region that comes with this. This crisis is an opportunity to do just that.

Dr. Hilda Heine is a former President of the Republic of the Marshall Islands and Thom Woodroofe is Senior Advisor on Multilateral Affairs to the President of the Asia Society Policy Institute.