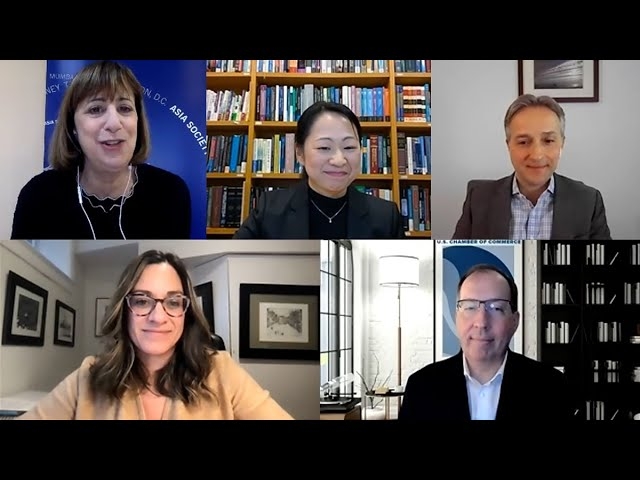 The Biden administration is facing a trade landscape that has changed significantly, both domestically and internationally, over the past four years. Economically, ties among Asian countries, particularly with China, have strengthened during this time period. Two major regional trade agreements, the CPTPP and RCEP, have been signed and implemented, respectively. Although there is a call from some in the Indo-Pacific region for the US to return to the CPTPP, it is unlikely for the immediate future as the Administration focuses on COVID, economic recovery, and rebuilding U.S. competitiveness. If the U.S. were to consider rejoining, it would likely need to seek important revisions and updates to the CPTPP.

In a recent Asia Society Policy Institute (ASPI) paper, Reengaging the Asia-Pacific on Trade: A TPP Roadmap for the Next U.S. Administration, published in September 2020, the Biden administration is advised to re-engage economically in the region even if it is not prepared to rejoin the CPTPP. Specifically, the report recommends exploring narrower sectoral deals in relevant issue areas to build trust and gain momentum in the region, while providing a vehicle to participate in rulemaking and standards setting.

The following questions were discussed among the expert panelists:

The panel event explored the issue of sectoral trade via two major frames – (1) the benefits and challenges of pursuing sectoral deals; and (2) the possible contents and participants for such deals.

The first topic of discussion that the panel explored was the benefits and challenges of pursuing sectoral deals. Sectoral deals can be attractive options as (1) they are easier to negotiate than a full-fledged FTA, depending on the topic, and can be put into place more quickly; (2) they can be less politically controversial at home; (3) they may not require congressional approval; and (4) they may serve as potential building blocks for future, broader agreements.

With a new administration, it will inevitably take time to develop a trade agenda and form a U.S position on pursuing comprehensive trade agreements in the future. Stewart argues sectoral deals can be a quicker alternative and may serve as potential building blocks for future, multilateral agreements. The earliest instance the U.S. could realistically see a broad FTA negotiation launched is at least a year away, if not longer. But Stewart remarks, in the meantime, for certain sectors, including the environment, a quicker negotiation timeline would be welcome as time is of the essence. Stewart also comments, “We spent so many years on the TPP and we are still not in the deal. Meanwhile, if we had some sectoral building blocks that we were working on with some of the countries that were not FTA partners at the time we would have environmental benefits flowing from that, partners readying for a comprehensive FTA.”

Sectoral deals can also be less politically controversial and may not require congressional approval. Fukunaga acknowledges that it would be too optimistic to expect an immediate return by the United States to the CPTPP, particularly with congressional pushback and the Biden’s administration’s focus on domestic economic recovery. However, in the interim, trading partners, like Japan, can use sectoral agreements to encourage the U.S. to gradually reach an agreement with CPTPP partners. In the meantime, “Japan should take the lead in efforts to bridge the gap between the U.S. and CPTPP partners…Japan is perfectly suited to lead such initiatives because of its unique position of being party to the two mega-trade agreements, the CPTPP and RCEP.”

Furthermore, with the Biden administration’s trade policy focusing on U.S. workers and the middle class, a more inclusive trade strategy can be developed through sectoral deals. Colvin remarks in particular, that by building on the commitments in the United States-Mexico-Canada Agreement (USMCA), sectoral deals can be important building blocks when it comes to maximizing trade to be more inclusive and benefit women and minority-owned businesses in the U.S and globally. According to Colvin, “If you look at black-owned small businesses and performance during the pandemic, they relied on global markets for a much higher percentage of revenue than white-owned businesses.”

However, there are also some specific challenges that sectoral deals may present including: ( 1) identifying a topic for negotiation and developing consensus around it; (2) limited opportunities for tradeoffs, which can be an important dynamic in concluding any trade deal; (3) enforceability of such agreements, which rarely contain dispute settlement provisions; (4) potential issues with WTO compatibility around covering “substantially all trade”; (5) concerns of undermining the potential for a future, comprehensive deal; and (6) selecting the right partners.

Murphy shares how a lack of trade-offs and selecting the right partners can be a challenge for a sectoral deal. While broader agreements with multiple parties allow for trade-offs, narrower agreements with partners that largely share your views do not allow you to get far. According to Murphy, the U.S.-Japan Digital Trade Agreement is such an example, “Parties committing not to discriminate and abuse each other is great. But it’s not like the two countries have been doing this. Whereas in the WTO, there are lots of economies where we would like to have these commitments.”

Stewart also explains that there can be difficulties in crafting an effective enforcement mechanism depending on current Congressional authorities, complicating things. She warns, “If you look at sectoral deals that don’t have [enforcement through trade sanctions] you can argue there is a backslide.” Though in the case of the environment, she adds, “You don’t want to be sending the signal that we are backing off from a more enforceable set of commitments down the road as there is no time to waste.” Murphy also discusses how sectoral deals can undermine future potential for a more comprehensive deal. He refers to the U.S.-Japan Trade Agreement (USJTA), which eliminated or lowered tariffs for certain U.S. agricultural products for American farmers that were at a disadvantage in the Japanese market. Ultimately, this agreement took away the impetus to harness a larger, high-standard, comprehensive deal.

In terms of potential issues with WTO compatibility, specifically around the requirement to cover “substantially all trade”, Fukunaga acknowledges that this can be a concern though it should be viewed in the context of developments over the years. To illustrate this point, Fukunaga refers back to the USJTA. When the agreement was signed, concerns over whether it met the WTO requirement arose. That said, Fukunaga argues, “The trade liberalization requirement was drafted in the 1940s. When we interpret that provision now we need to take into account the historical evolution surrounding regional integration.” With this in mind, Fukunaga argues sectoral trade deals should in fact be allowed to be considered as interim agreements as defined in Article XXIV: 5.

Next, the panel delved into the possible contents of specific sectoral deals, as well as potential partners to engage in the issue areas of the environment, digital and medical sectors. In light of COVID and concerns with access to medical supplies, equipment, and medicines, rapid digitization of our economies accelerated by COVID lockdowns, and growing concern for the environment, the panelists provided compelling reasons for why sectoral agreements in these areas are timely and relevant.

According to Stewart, the environment is an area ripe for collaboration and where the U.S. can take on a leadership role in the region. This would carry mutual benefits for the U.S. and its major trading partners around challenges of food scarcity, public health, disaster prevention, and gender issues. The environment would be an ideal sector to focus on as well since time is of the essence and setting standards in the region quickly is critical. Stewart advises that when looking at a potential sectoral deal, “We will want to look at the delta between CPTPP and USMCA and then look at what additional climate add-ons make sense.” Issue areas that can be included in a sectoral deal are climate, wildlife trafficking, and fisheries subsidies. In regards to climate change, Stewart mentions further actions that can be taken – adding the Paris Agreement to a list of multilateral, environmental agreements that countries commit to enforcing, creating new commitments around cleantech, renewable energy, and energy efficiency standards, working with CPTPP countries and others on a list of environmental technologies that could be subject to lower tariffs, and allowing these technologies to be more accessible to those who really need them. As for potential partners, Stewart recommends the signatory countries of the CPTPP. This is because they are already implementing the CPTPP environmental obligations and there is room for further deepening climate-related commitments. India is also a potential partner, albeit more challenging.

As learned during the pandemic, there are meaningful ways to make improvements to trade rules in the digital space and create more resilient supply chains. According to Colvin, “There is enthusiasm to use sectoral deals as a ‘sandbox’ to further develop rules and standards particularly for the global digital economy.” He adds that key provisions would be gold standard agreements on digital trade and customs and trade facilitation to capture what small businesses rely on to access global markets. Specifically, when it comes to cybersecurity provisions, Colvin suggests it might be worth operationalizing common provisions under the Paris Call for Trust and Security in Cyberspace. Other areas that would be suited to a digital sectoral deal would be cloud standards and privacy. Colvin also emphasizes how digital sectoral deals can further build upon the commitments in USMCA by providing opportunities to help small businesses and workers, particularly women and minority entrepreneurs, around digital skills training, workforce development, and capacity building. Countries that would be natural partners for collaboration would be Singapore, Japan, Australia, and New Zealand, as these economies already have existing agreements among themselves and/or with the U.S. However, the real opportunity would lie with aligning on digital with other economies including Indonesia, South Korea, Malaysia, the Philippines, and Vietnam, since these are countries where we have witnessed restrictions.

Given the pandemic, there has been increased international interest in sectoral agreements around the medical sector, particularly with regard to medical supplies. However, during the initial months of the pandemic, export restrictions proliferated in many countries around the world which made the pandemic response more difficult. Although this trend has largely abated according to Murphy, the EU recently adopted a vaccine export authorization scheme that some fear will slow or halt vaccine production. Tariffs on a number of important medical goods have also been cause for concern and should be lifted. Murphy advises the Biden administration to take the lead in securing international sectoral agreements that lower barriers in trade around medical goods by, “Tackling tariffs, non-tariff barriers, trade facilitation, and export restrictions.” This he argues could allow for medical goods to be more widely available and facilitate a robust pandemic response. According to Murphy, since the EU is also a major production center for medical goods, it would make sense for the U.S. to also explore sectoral deals around medical goods outside the Asia-Pacific region as well.

The discussion came to a close with a dynamic conversation on the Biden administration’s new trade policy focused on workers and the U.S. middle class. According to Murphy, it is a false distinction to believe that there are trade policies that are good for workers and others that are good for employers when really “they are in the same boat together.” Stewart adds that more generally, sectoral deals can be seen as a way to deepen a relationship, a “blueprint or a glide path” for something down the road, and can include labor issues. She reinforces this by saying, “There is no harm in immediately starting to work with some countries around worker or environmental protections, even outside an enforceable framework, as that does not preclude you from getting to that framework later.”