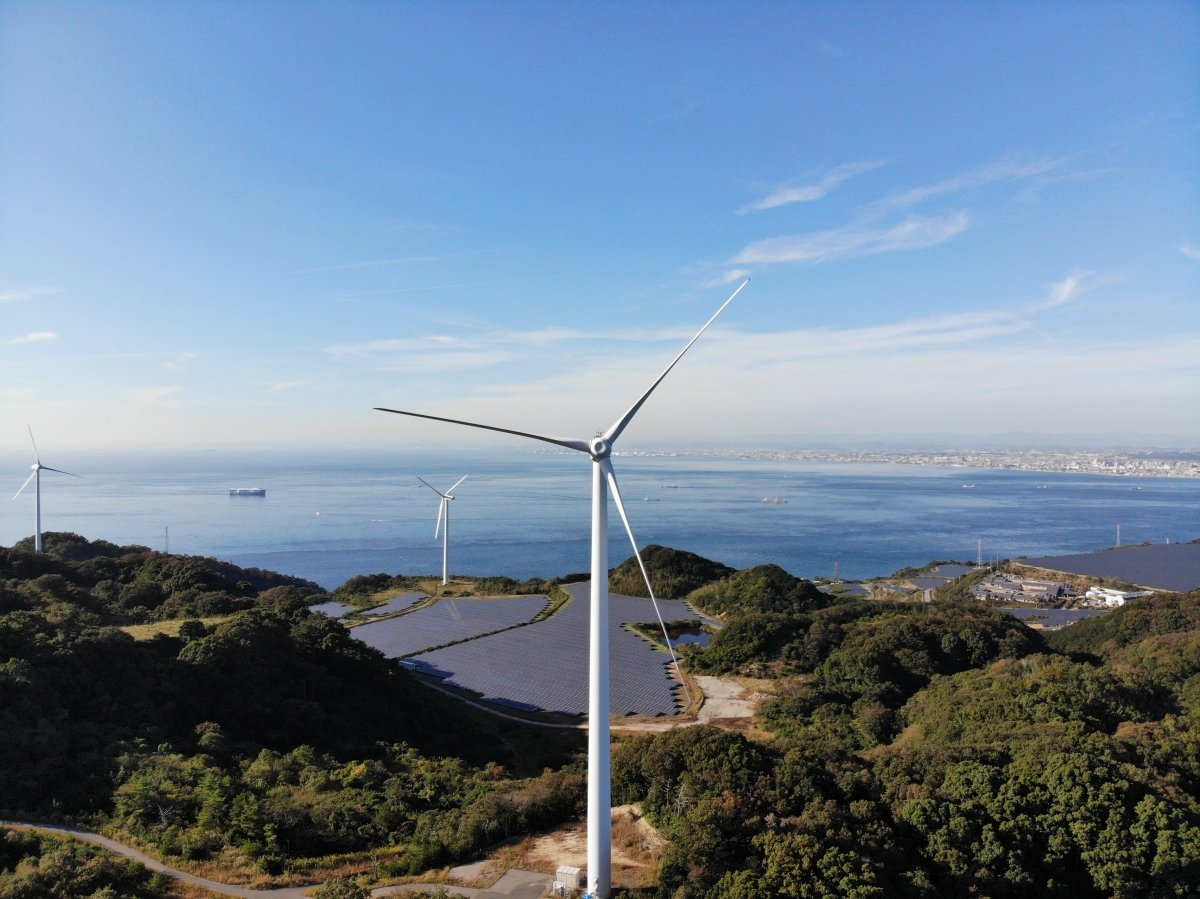 Japan, the fifth-largest emitter in the world, has played an important role in tackling climate change globally as a developed Asian country with a long history of environmental and climate regulation. It began addressing pollution from its rapid economic development as early as the mid-twentieth century. Japan later brokered the Kyoto Protocol, the first international climate treaty, in 1997. While entrenched industry interests have sometimes hampered Japan’s overall climate ambition, by 2019 its emissions had declined 13.5 percent from their peak in 2013. 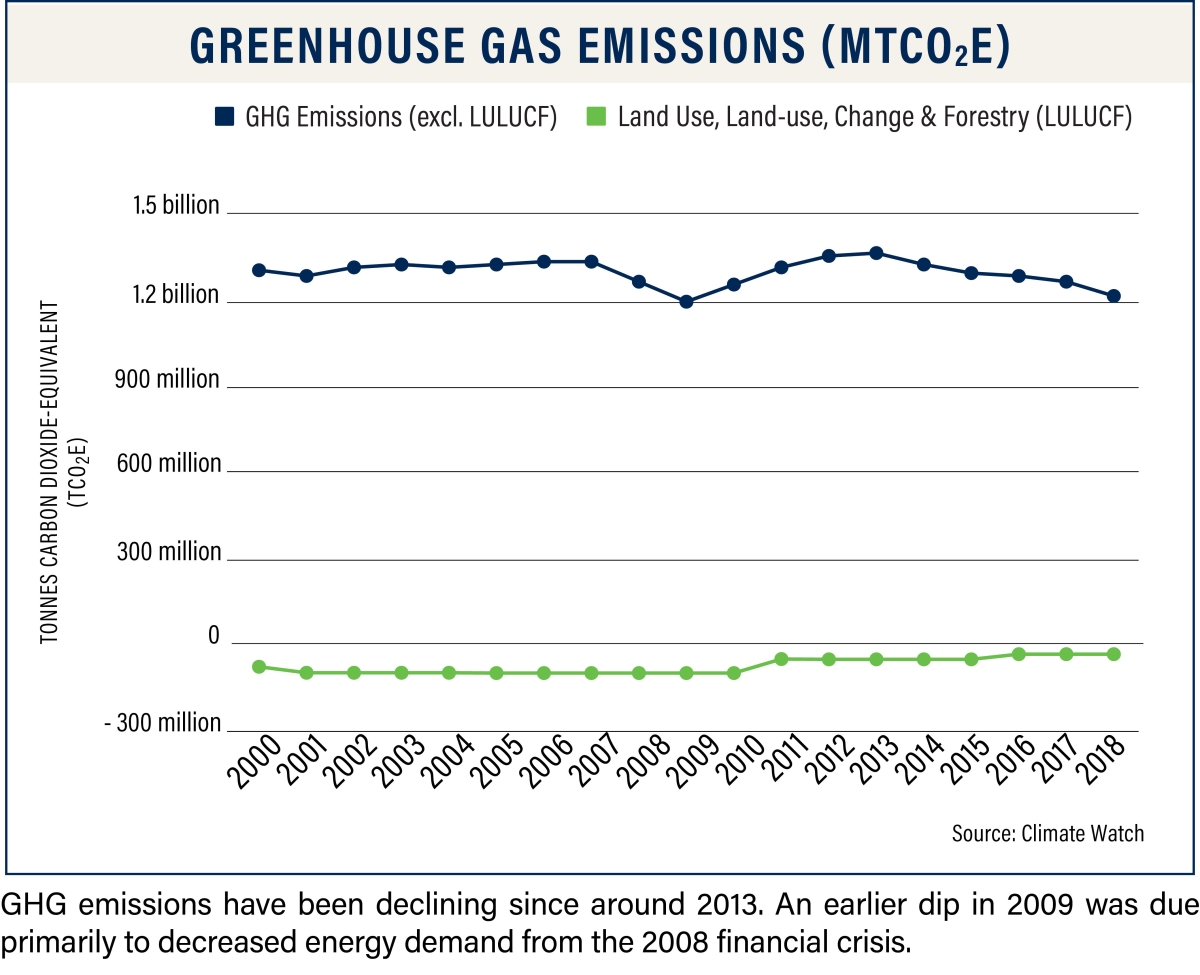 Under the first phase of the 1997 Kyoto Protocol, Japan achieved a 6 percent emissions reduction below 1990 levels between 2008 and 2012. In 2009, the government declared a more ambitious goal of 25 percent reductions below 1990 levels by 2020. However, the Tōhoku earthquake and subsequent Fukushima nuclear accident in March 2011 forced Japan to adjust its climate change strategy by withdrawing its Basic Energy Plan that had relied on nuclear energy to cut emissions and turning to fossil fuels instead. Japan also did not join the second phase of the Kyoto Protocol on the premise that it did not include enough of the world’s emissions to be effective. 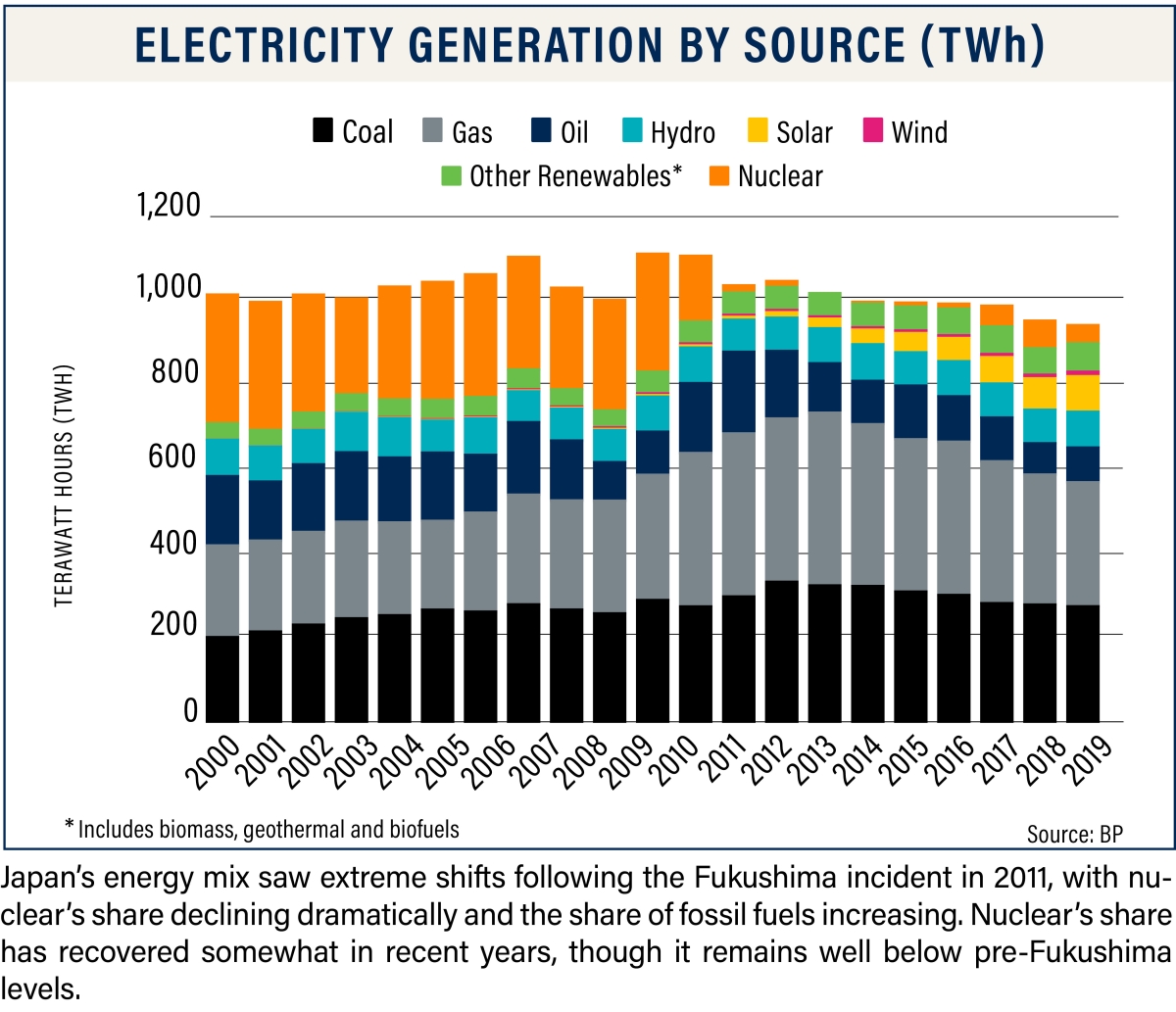 After the Paris Agreement was adopted in 2015, Japan initially pledged to reduce emissions by 26 percent below 2013 levels by 2030 in its Intended Nationally Determined Contribution (INDC) and by 80 percent by 2050 in the first version of its Long-Term Strategy (LTS). In its updated Basic Energy Plan in 2018, Japan set major goals to guide its decarbonization and build the foundation for renewable energy to become its core energy source by 2050.

Japan has led in developing energy-efficient technologies and products since the 1970s’ energy crisis and has leveraged its well-developed public transportation system and frequent remodeling of buildings to reduce emissions. However, Japan still heavily depends on coal and other fossil fuels in its energy production, and its financing of coal-fired plants abroad has drawn severe criticism from environmental groups.

In October 2020, Japan announced its ambition to reach carbon neutrality by 2050, only a month after China committed to carbon neutrality by 2060 and a week after South Korea’s 2050 carbon neutrality pledge. Japan’s move followed updates to its Nationally Determined Contribution earlier in March of that year. Japan’s net zero target was later enshrined in 2021 in revisions to the Act on Promotion of Global Warming Countermeasures, which further stressed the importance of renewable energy for achieving the target and introduced measures on greenhouse gas (GHG) emissions reporting. Months later, Prime Minister Yoshihide Suga pledged a new interim target of reducing emissions 46 percent below 2013 levels by 2030 during his speech at the U.S.-hosted Leaders Summit on Climate in April 2021.

After Prime Minister Fumio Kishida assumed office in October 2021, Japan committed an additional $10 billion of climate finance for developing countries over the next five years during COP26. Japan also endorsed the Global Methane Pledge, the Glasgow Breakthrough Agenda, the Leader’s Declaration on Forests and Land Use, and the Global Forest Finance Pledge and put in place specific regulations to mandate climate-related financial disclosures for large companies.

On coal, Japan announced in July 2020 that it would stop new financing for overseas coal “in principle.” This major shift in policy received praise from civil society and put pressure on Korea and China to follow suit. More recently, Japan has also withdrawn support for ongoing large-scale coal-fired power plant projects in Bangladesh and Indonesia. However, at COP26, Japan was criticized for not joining the Global Coal to Clean Power Transition Statement and developing the utilization of ammonia and hydrogen to decarbonize its thermal power plants. Prime Minister Kishida has promoted the use of fossil power plants as necessary to integrate renewable energy, leading observers to worry that Japan may continue to rely on coal power beyond 2030 or even out toward 2050.

Japan also did not support the Declaration on Accelerating the Transition to 100 percent Zero Emission Vans and Cars, even though it has led the automobile industry internationally, and the government has set a target of 100 percent electric vehicles in new vehicle sales by 2035. In reality, Japan lags behind in progress toward its targets as well as in international competition. For instance, Toyota has lobbied strongly to continue including carve outs for hybrid vehicles production.

Japan's updated target of 46 percent emissions reductions by 2030 represents significant progress compared to its previous target. The new target aligns with the Paris Agreement’s intention to limit global temperature rise to 2°C, though it falls short of being 1.5°C-compatible. However, Japan has not yet proposed concrete sectoral measures to achieve its ambitious goal. PM Kishida has also deprioritized climate action given the easing of international pressure after Japan updated its NDC.

The biggest challenge for Japan will be transforming the power sector. Although Japan announced last year that it would stop new support for overseas coal-fired plants, its Basic Energy Plan updated in October 2021 maintains the share of coal in domestic energy production at 19 percent in 2030, while aiming to increase renewable energy to 36 percent–38 percent from 18 percent in 2019.

Expanding renewable sources has been a barrier as Japan’s geography and frequent natural disasters have historically inhibited growth. Deep shorelines and mountainous topography make it challenging to install both offshore and onshore wind farms and solar panels. Whether Japan should restart existing nuclear reactors and/or construct new ones remains controversial in the wake of the Fukushima disaster, even though Japan has improved regulatory authority and safety standards for nuclear power.

New technologies are starting to address some of the barriers to Japan’s clean energy transition. The Japanese government is actively advancing floating offshore wind as a promising technology. The government is also investing in technologies that make thermal power plants cleaner, including carbon capture, utilization, and storage (CCUS) and the use of ammonia and hydrogen co-firing, although these investments have been critiqued for giving license to extend the lifespan of existing fossil energy plants. Another challenge is preventing unstable energy supplies and high electricity prices from negatively impacting citizens during the transition period.

The manufacturing industry is responsible for 37 percent of Japan’s CO2 emissions and is another crucial area for addressing Japan’s carbon neutrality – especially carbon-intensive sectors like steel and cement. In steel production, which alone accounts for more than one-tenth of the country's total emissions, the use of cleaner electric furnaces only accounts for 25.4 percent of production, as compared to more than 70 percent in the United States and 31 percent in South Korea. Under a pathway toward net zero, industry will have to go beyond the pursuit of energy efficiency by replacing existing equipment with clean technologies like hydrogen reduction steelmaking. This will require significant investment and policy support to ensure the sector maintains its international competitiveness.

Promoting electric vehicles (EVs) will be critical for achieving Japan's net zero goal, as the transportation sector is responsible for one-fifth of the country’s CO2 emissions. Although Japan was an early promoter of EV research, its production capacity has lagged significantly compared to that of neighboring countries like China and South Korea. The government will need to collaborate with the auto sector to accelerate EV deployment and solve bottom-up infrastructure challenges like charging station availability.

With Japan set to host the G7 in 2023, international audiences may expect Japan to take bolder action on the climate agenda, especially in the lead-up to COP28, which will be hosted by the Asia-Pacific Group and see the first Global Stocktake on the world’s collective progress. Potential leadership actions could include Japan committing to phase out coal by 2030 and/or achieving zero carbon electricity by 2035. Although Japan has pushed back on such commitments, given its limited resources as an island nation and the challenges of the ongoing global energy crisis, international efforts like the U.S.-Japan Climate Partnership could help build support for an accelerated energy transition.

Japan’s clean transition will require a massive expansion of renewables and deep decarbonization in the manufacturing industry. Technologies like floating offshore wind, next-generation solar cells, CCUS, zero-carbon fuels, and hydrogen reduction steelmaking will need investment and innovation. To speed up this process, Japan recently appointed Minister of Economy, Trade, and Industry Koichi Hagiuda as the new Green Transformation minister to lead on 2050 carbon neutrality commitments and design a roadmap of clean energy investment in the next decade. International collaboration could also facilitate progress: Japan has not only offered billions of dollars of overseas climate finance but has also established technological partnerships for hydrogen (Hydrogen Energy Ministerial Meeting) and CCUS (Asia CCUS Network) involving the United States, European countries, Australia, and Asian nations. These initiatives could help Japan speed up research and development and build supply chains for necessary materials.

While Japanese people have already adopted energy-efficient equipment and low-carbon lifestyles, further behavioral changes could accelerate progress. Encouraging environmentally conscious customers to purchase clean energy, which has been possible since the electricity market liberalization in 2016, could speed up renewables deployment and uptake.

Carbon pricing is another tool to watch. Preparations to establish the first national market for carbon trading will be launched in September 2022, and the market will go into full operation in April 2023. Additional financial resources from carbon pricing could further boost public climate investments and build on the $15.7 billion Green Innovation Fund launched in 2021. This past May, PM Kishida announced that Japan would mobilize another $157 billion by issuing green sovereign bonds, signaling Japan’s willingness to expand green investment and consider carbon pricing to secure revenue.