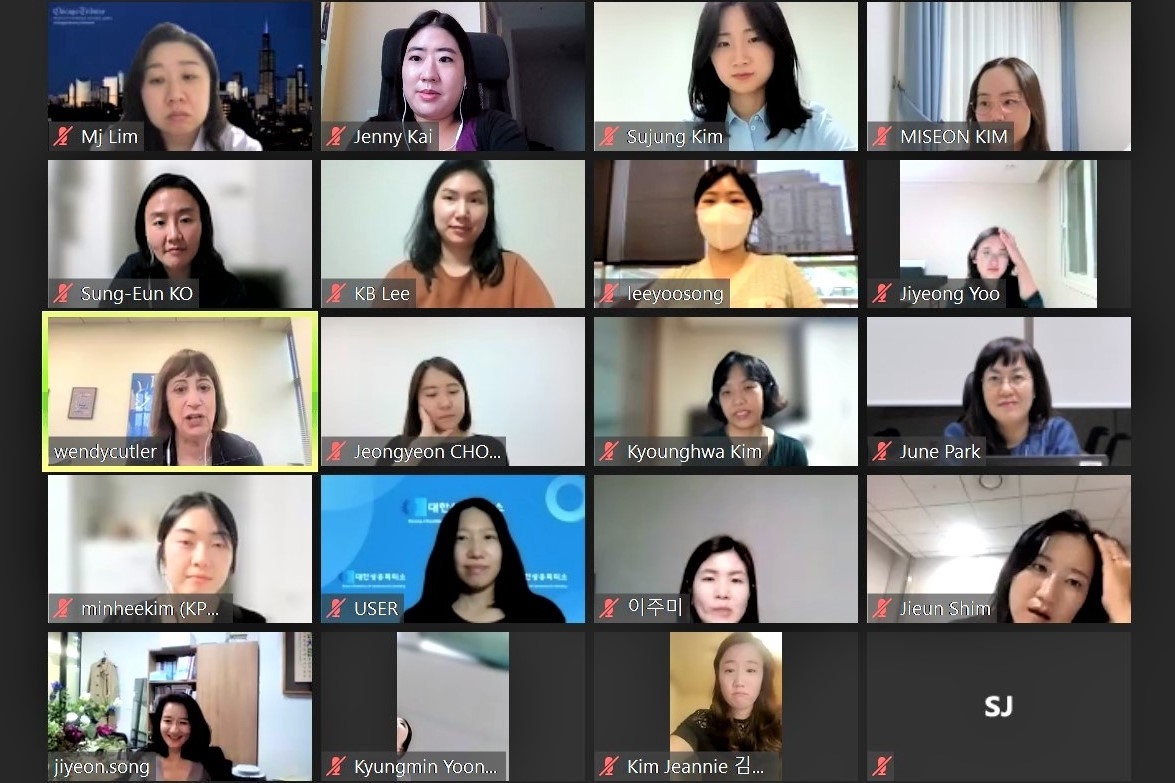 The Asia Society Policy Institute's Building Trade Ties with Korea’s Emerging Leaders Program offers the opportunity for promising female professionals from the Republic of Korea with interest and experience in international trade to participate in an intensive program featuring workshops, briefings, and capacity-building exercises. The program seeks to deepen understanding of trade negotiations and policymaking, while providing mentorship and guidance for women’s empowerment in the workplace.

Building on the success of the inaugural cohort in 2019, and with the generous support of the Korea Foundation, ASPI continued the program for a second year. Due to the pandemic, the 2021 program was held virtually over a two-month period, from September 9th – October 20th 2021, in the form of seven interactive webinars. This included meetings and conversations with various, inspiring current and former U.S. officials, trade experts, and female leaders in finance, the media and tech sectors.

Through these sessions, the participants were able to further develop their negotiation skills, deepen their understanding of different types of trade frameworks, learn about the complex dynamics between stakeholders and build networks with other female trade professionals. Participants were also able to benefit from mentorship and advice from female leaders on developing leadership skills, advancing in the workplace and how to more effectively manage work-life balance challenges.

The Asia Society Policy Institute (ASPI) was pleased to host the second cohort of the Emerging Female Leaders program, which included:

In the first session, Emerging Female Leaders (EFL) were able to get acquainted with each other through introductions and reviewed program objectives and expectations. The participants from this year’s virtual EFL program included 20 impressive women from across multiple sectors, including the Ministry of Trade, Industry and Energy and some of Korea’s most preeminent companies and institutions. The women were also welcomed by two guest speakers, Former Trade Minister Yoo Myung Hee and Jiyeon Song, an attorney at Kim & Chang and an alumna from the inaugural EFL program held in 2019.

“My attitude toward life and the workplace has changed after taking this webinar.” - Jumi Lee, KOTRA

Former Trade Minister Yoo provided opening remarks, touching on the unique challenges faced by Korean trade experts and female professionals. Minister Yoo shared how at international meetings, Korea typically does not fit naturally into an established bloc or grouping, which can prove difficult and remarked on the complexities of coordinating between the many competing interests of Korean industries. She also highlighted personal challenges of being a Korean female professional in a male-dominated organizational culture and navigating bias and prejudice in the workplace.

As an EFL alumna, Jiyeon Song imparted key advice to the group for how to best take advantage of the program and shared her journey of balancing a demanding career in international trade law and raising a family. Ms. Song shared the ways in which the program provided her with the opportunity to reflect on her professional goals and future aspirations and urged the group to do the same.

"I’ve learned how to become a better negotiator both in my professional and personal life." – Sung-Eun Ko, KITA

During this session, Ms. Cutler also shared her own experiences working on a range of bilateral, regional, and multilateral negotiations, including the U.S.-Korea Free Trade Agreement, the Trans-Pacific Partnership and U.S.-China negotiations. Participants were also able to discuss these topics amongst themselves in smaller groups based on their own personal and professional experiences negotiating and presented their thoughts and findings to the group.

In the third session, the group developed their understanding of the trade policy process in the United States and learned about the role of Congress and other stakeholders. The group was first joined by Arrow Augerot, Director of International Policy, Americas at Amazon and Tami Overby, Senior Director at McLarty Associates, who provided insights on working with the private sector stakeholders and trade associations when formulating trade policy. Both speakers emphasized the importance of establishing effective communication with industry partners, educating trade associations, and engaging in advisory groups and other informal meetings to provide input.

"The program was a good opportunity to learn how the U.S. government works on forming trade policy and how the private sector plays an important part in this process." – Miseon Kim, POSCO

In the second half of the session, Alexandra Whittaker, Chief Trade Counsel and Trade Subcommittee Staff Director for the U.S. House of Representatives and Elissa Alben, Former Senior Counsel for International Trade and Competitiveness at the U.S. Senate Committee on Finance, spoke to the group about the role of Congress in U.S. trade policy. The speakers stressed the importance of working in tandem with Congress to understand their interests as well as the concerns of businesses and civil society groups.

In the fourth webinar, the group learned about the critical role media plays in the formulation of trade policy, as well as the importance of interagency coordination in building consensus. In the first half of the program, Aime Williams, Washington Correspondent at the Financial Times and Trevor Kincaid, Former Deputy Assistant U.S. Trade Representative (USTR) for Public & Media Affairs, explained how the media can keep the public interested and engaged as well as play a key role in advancing negotiations toward a desired outcome. Both speakers encouraged bringing the press “into the room” as much as possible to allow them to be able to understand the nuances of key trade issues.

“This was one of the most valuable webinar programs I participated in this year.” - Sujin Kyung, Kim & Chang

In the second half of the program, Doug Bell, a former U.S. government official with experience working at USTR, the Department of the Treasury, and the White House, shared the importance of working across government and regulatory agencies in order to develop proponents. Mr. Bell advised mapping out key stakeholders and “working the room” well in advance of getting to the actual meeting. Furthermore, he shared insights for building relationships across agencies, including establishing credibility and trust, learning when to escalate an issue, maintaining respect for one’s colleagues, and patience.

In the fifth webinar, the group heard from two prominent female speakers in media and finance on overcoming barriers in the workplace and advancing professionally while managing a sustainable work-life balance. Lulu Wang, CEO and Chair of Tupelo Capital Management and Shery Ahn, Anchor for Bloomberg Television shared their own experiences of advancing in the workplace and shared lessons learned. Both speakers emphasized the importance of taking risks, developing professional networks, viewing diversity as an asset, and ensuring women’s voices are heard in the workplace.

“Learning from other women who have grappled with similar challenges – pursuing career goals while raising a family – gave me great confidence that I can also succeed.”  - Kwang-bin Lee, U.S. Embassy, Seoul

Both speakers also imparted advice on how to manage work-life balance and acknowledged how this requires consistent effort. Ms. Wang particularly encouraged participants to actively involve their families in their careers in order to allow for them to “feel a part of the team” and ultimately be more supportive. Participants were collectively able to share their own personal experiences, challenges, and concerns regarding women’s empowerment in the workplace with the group as well.

October 13th – Tech and Trade & Negotiating in a Multilateral Setting

In the sixth webinar, the group learned about the intersection between technology and trade policy, as well as unique features of multilateral negotiations. In the first half of the program, former United States Trade Representative (USTR) officials, Behnaz Kibria, Senior Policy Counsel at Google and Jennifer Prescott, Director of International Trade & Tax Policy and Latin America Public Policy at Amazon Web Services shared their experiences of pivoting careers into the tech policy space and touched on key tech issues, including data and cloud policy. Both speakers also shared their own personal experiences of raising families while managing demanding professional roles.

“An all-women group in a professional setting is rare and it was uplifting getting to know a group of emerging female trade leaders.” - Ji Yeong Yoo, STEPI

In the second half of the program, Wendy Cutler provided an overview of multilateral negotiations. Topics included the key differences between multilateral, plurilateral, and bilateral negotiations and important skills for trade negotiators in a multilateral setting. Ms. Cutler was also joined by former USTR colleagues, Maureen Hinman, Co-Founder and Executive Chair at Silverado Policy Accelerator and Sarah Stewart, Executive Director at Silverado Policy Accelerator, who elaborated on some fundamental strategies for participating effectively in multilateral trade negotiations. Some of these skills included building a strong core team, finding common ground with domestic stakeholders prior to negotiations and engaging in creative problem solving.

For the final session, Wendy Cutler and the group concluded with reflections and key takeaways from the program. EFL participants discussed the myriad ways in which the program has enriched their professional and personal development. Some of the lessons learned that the women highlighted included learning practical, negotiations tactics, gaining a better understanding of U.S. trade policy, recognizing the important role stakeholders play in trade policy, and learning ways to more effectively balance work and life to advance in their careers. Many of the program participants also shared their hopes for integrating these lessons in their own personal and professional lives back in Korea.