Marivi Soliven talks about her insights, inspirations and ideas behind the Palanca award-winning novel, The Mango Bride.

MANILA, Philippines -- The warm ambiance of the Writer’s Bar at Raffles Hotel Makati last July 29, 2013 ushered in the wonderful evening and welcomed members of the Asia Society and groups of book enthusiasts for the Meet the Author event with Marivi Soliven. All eyes and ears turned as she took to the stage and began a dramatic reading of an excerpt from her latest book, The Mango Bride.

Marivi Soliven is the second author invited to come to Manila as part of National Bookstore’s Meet the Author Series, in collaboration with Raffles Hotel Makati and Asia Society. 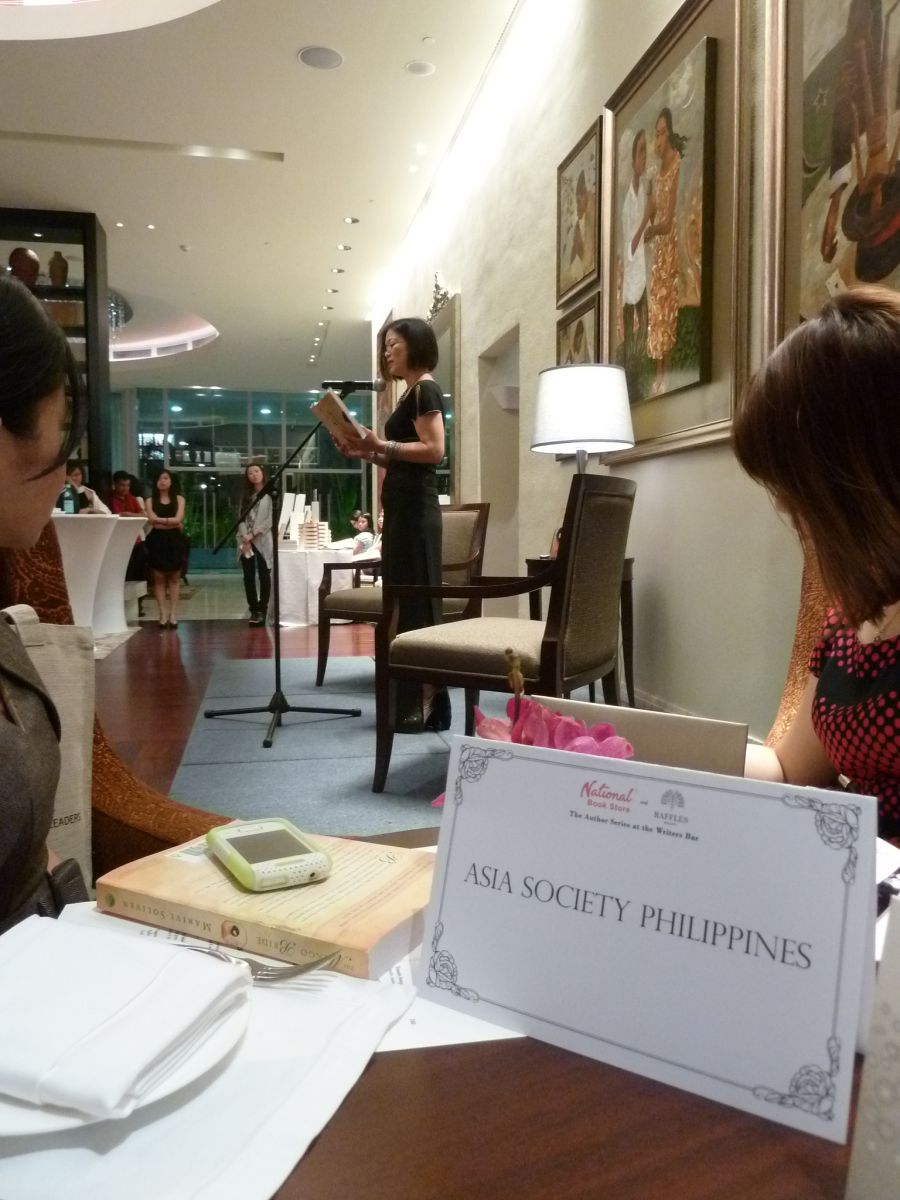 Marivi Soliven reading an excerpt from her book, The Mango Bride.

Marivi Soliven is a Filipina author based in America where she works as an interpreter. Her background as a writer includes having taught creative writing at the University of the Philippines, the Ayala Museum, and the University of California in San Diego. The Mango Bride has earned her a Hedgebrook writing residency last August 2012, and in 2011, garnered the Grand Prize for the Novel in English at the Carlos Palanca Memorial Awards for Literature. Soliven has authored other works, namely Suddenly Stateside and Spooky Mo.

The Mango Bride is about the quest of two women and their journey to a new life in America, as they struggle in trying to adapt to a new culture, only to be entangled in each other’s chaotic lives. The book touches on various issues surrounding Filipino women immigrants, and invites the readers to know about the different generations and social classes of Filipinos and how that plays into the plot of the book.

After the reading ended, Soliven sat down with the Purchasing Director of National Bookstore, Xandra Ramos-Padilla, and discussed different aspects of the book. 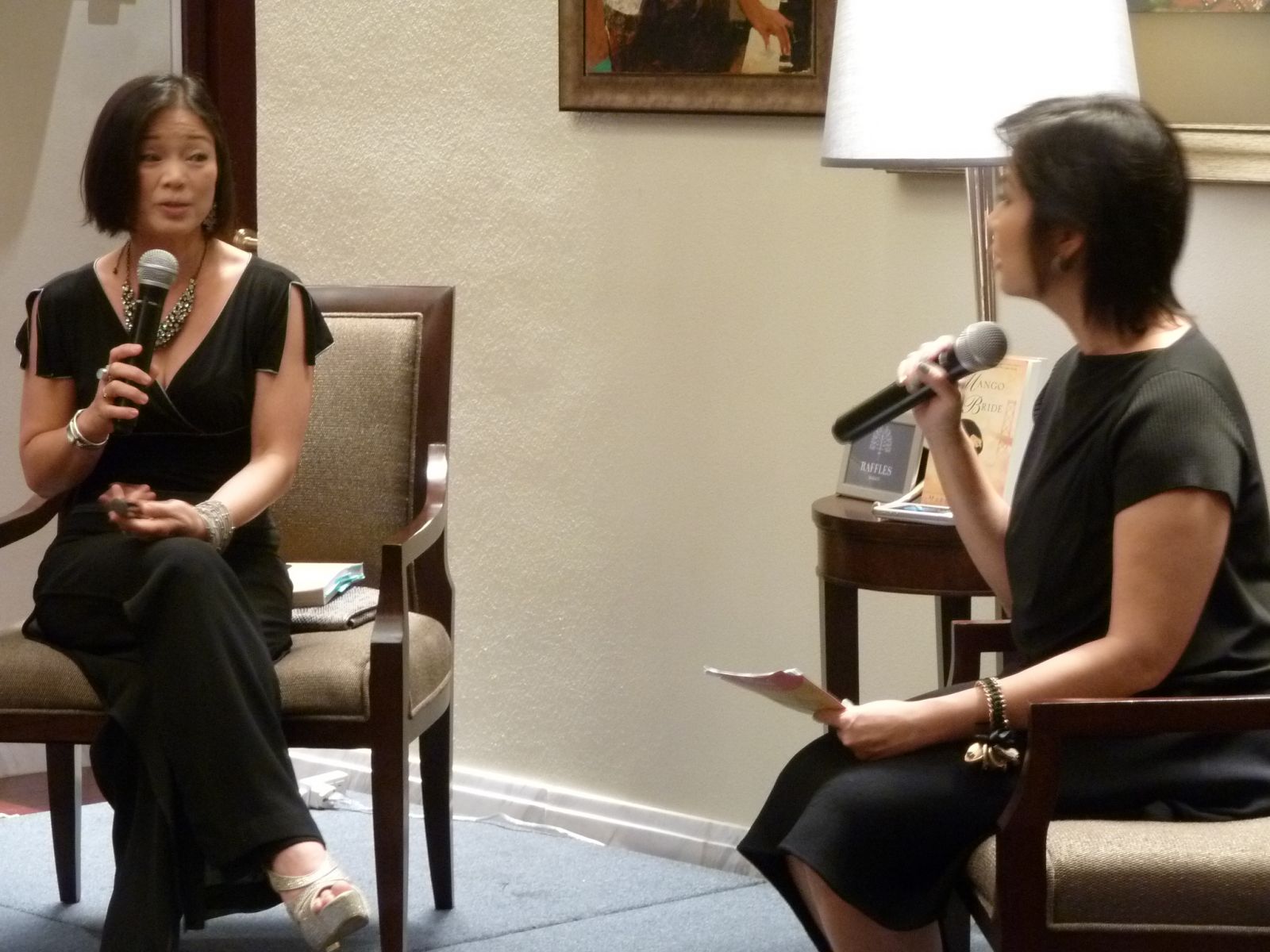 On the background and process of creating the book

When asked if she interviewed actual mail-order brides to help write the novel, Soliven explained that she did not, but that she was able to extrapolate from her conversations with females calling the International Domestic Violence hotline, working as an interpreter. Soliven backed up her facts by doing more research online.

Soliven also shared that through the course of writing The Mango Bride, she already knew how it would end. The idea for how the novel will close was concrete and did not change even when the in-betweens of the story did. Soliven’s editor from Penguin Books Publication worked closely with her, often suggesting new ideas and angles to write from as the story was unfolding.

On the influence of Philippine Culture

Ramos-Padilla asked about the use of Taglish (mixture of English and Tagalog words) in The Mango Bride, considering the novel was intended for an international audience. Soliven responded that she wanted to use Taglish as a tool to round out the characters, and to establish each of their social classes. She explained that the use of both English and Tagalog varies with every Filipino, and is usually tied up to where they are on the social strata. Injecting Taglish into the characters’ dialogues, according to Soliven, adds a kick of flavor to the novel.

Another topic that was brought up was the concept of shame and how it is one of the central themes of the book. Soliven elaborated how shame is a governing factor in Philippine culture, and how she wanted to use this as a device to explain how the characters in her book are motivated to behave and to interact with the other characters. 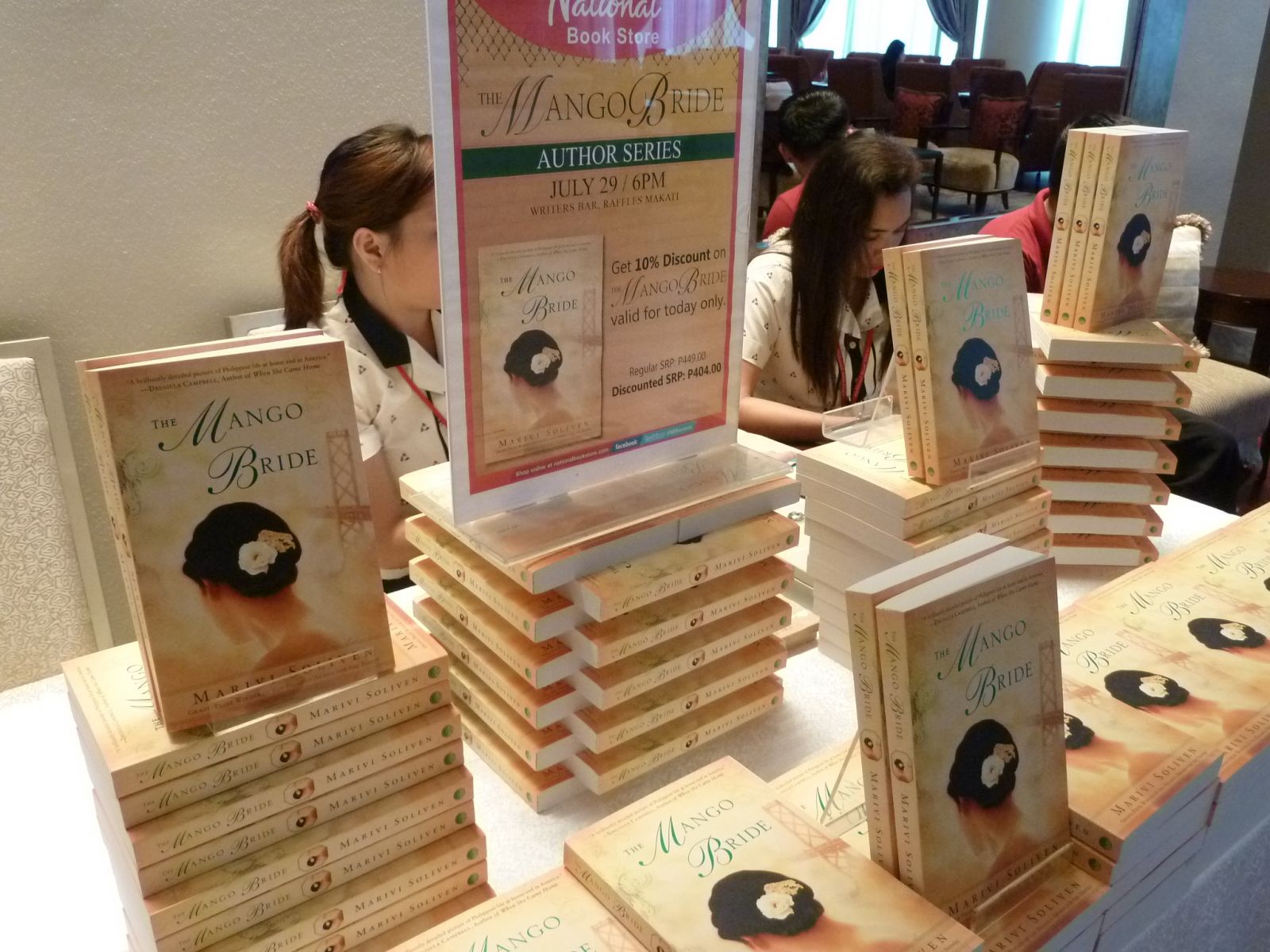 On Filipino identity and adaptation

One key aspect of the novel is the concept of adapting, following the question of identity. Soliven shared a conversation she once had with an American, saying she (Soliven) spoke good English and didn’t have a Filipino accent at all. Soliven replied with a modest thank you, but expressed to the audience that she could have used a Filipino accent if she wanted to, but chose not to so she would be perceived in a familiar way and be treated as an equal.

This, Soliven elaborated, reflected the idea of adapting to a different culture in the hopes of fitting in and not sticking out like a sore foreign thumb. Soliven says that she believes that Filipino immigrants lead 3 separate lives: the public, the private, and the secret life. The public life is what they show people everyday—how they dress when they go out, how they talk with foreigners, what they order in a restaurant, etc. The private life is the one they have when they are just at home, clad in their pambahay clothes. Then there’s the secret life, the one that never gets talked about, the one they dare not show anyone. For immigrants, this secret life is what creates that distance to who they are on the inside, and who they present to the public.

Soliven quotes, “Moving to the US is like throwing a baby into the water. It can be scary and uncertain, but eventually, you will learn how to swim.” Learning to adapt to the culture in America does not automatically mean losing your identity as a Filipino. You simply learn how to work your way around life a little more different.

A book-signing followed the conclusion of the discussion, as Padilla thanked Soliven for her time.