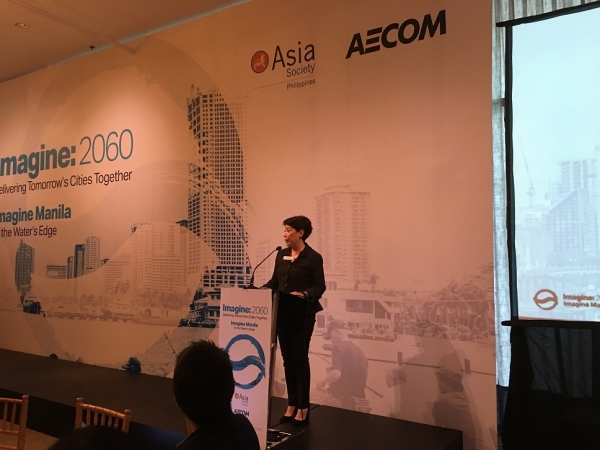 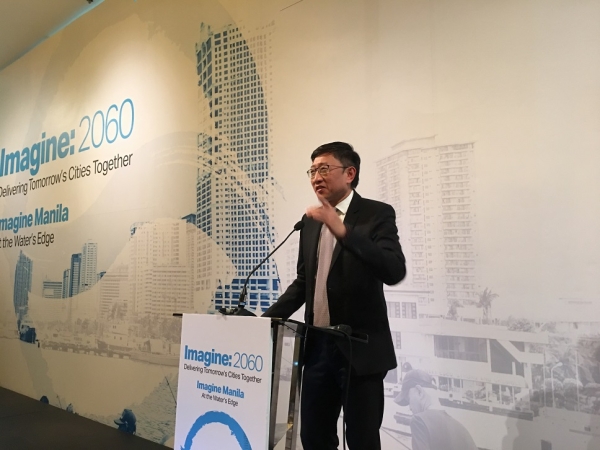 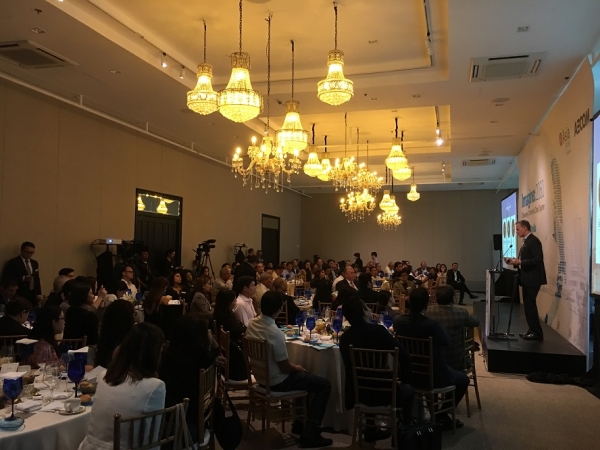 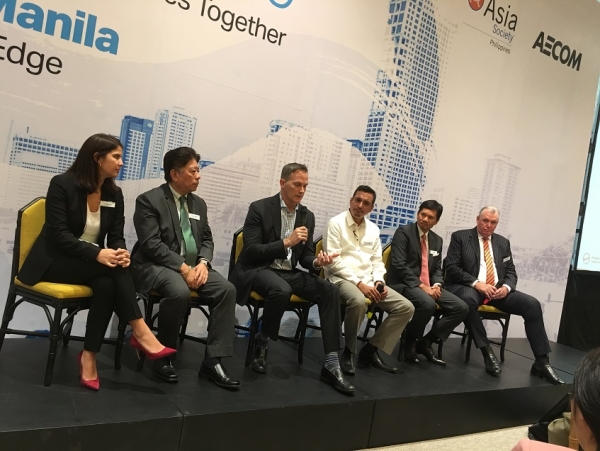 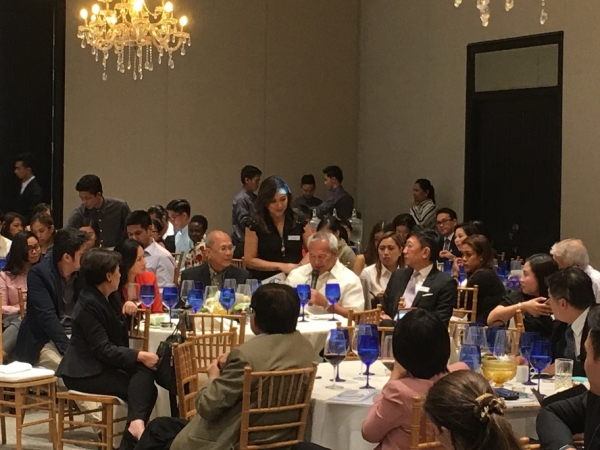 Enlarge Hide captions
1 <p><span style="font-size: 12.8px;"><strong>3 April 2017: </strong>AECOM, a premier, fully integrated infrastructure firm, and Asia Society, a leading global non-profit institution, launched a three-year partnership - <strong>Imagine 2060: Delivering Tomorrow&rsquo;s Cities Together</strong> at The Manila House in Bonifacio Global City, Taguig City on Thursday of last week.&nbsp;</span></p> <p>The two organizations have used their extensive public and private sector networks to bring together a group of local and international leaders in urban design, infrastructure and public policy to connect with a common goal &ndash; imagining a long-term vision for Metro Manila. The first year of the series will see similar events take place in Sydney, Los Angeles, New York and Hong Kong.</p> <p>&ldquo;Manila is the ideal place to kick off the<strong> Imagine 2060: Delivering Tomorrow&rsquo;s Cities Together</strong> series. It is a vibrant and exciting city but its potential is being stifled by chronic stresses caused by development, urbanization and densification which will only intensify with the predicted level of population growth,&rdquo; says AECOM Asia Pacific President, Sean Chiao. &ldquo;If we want future generations to flourish in Manila, it is up to those in positions of influence today to lead the way and create a legacy they can be proud of.&rdquo;</p> <p>The initiative will cultivate a global community of &ldquo;city shapers&rdquo; who are committed to sharing their experience and best practices, all aimed at enhancing the future quality of life in Manila, Sydney, Los Angeles, New York and Hong Kong.</p> <p>&ldquo;This is the start of a new conversation between the brightest minds in urban design, business, economics, infrastructure design and public policy,&rdquo; continued Sean Chiao. &ldquo;Throughout the series we will explore cities through five key lenses of wellbeing, economic development, culture, mobility and, project delivery. It is our belief that the right balance of these elements leads to the best outcomes for all stakeholders.&rdquo;<br /> Leading businesswoman and Chair of Asia Society Philippines, Doris Ho says, &quot;Asia Society is honored that Metro Manila is the kick-off city for <strong>IMAGINE 2060</strong>, a prestigious, global policy forum that will travel to other landmark cities such as New York, Los Angeles, Hong Kong and Sydney throughout 2017.&rdquo;</p> <p>&ldquo;With the trend towards urbanization around the world, it has become imperative for every city to address the mounting pressures on sustainability and liveability&rdquo;, continued Doris Ho. &ldquo;To help Metro Manila address these challenges requires innovative thinking, determination and political will to adopt best practices from around the world. We are thrilled to co-sponsor this forum, where great ideas can be shared and solutions identified which will contribute towards the realization of a positive, future-forward vision for Metro Manila.&quot;</p> <p><strong style="font-size: 12.8px;"><span style="font-size: 12.8px;">2017: At The Water&rsquo;s Edge</span></strong></p> <p>&nbsp;</p> <p>In its inaugural year,<strong> Imagine 2060</strong> will look at issues involving the urban waterfront under the heading &ldquo;2017: At The Water&rsquo;s Edge&rdquo; &ndash; a wide-ranging examination of how the diverse approaches to their proximity to water have shaped the quality of life for citizens of these five cities in radically different ways.</p> <p>In Manila the forum explored key themes in diverse and informative presentations:</p> <blockquote> <ul> <li> Jeremy Barns, Historic perspective of Manila, how citizens of the Philippines&rsquo; capital city can reimagine the original ideas of a &ldquo;City Beautiful&rdquo;, created by renowned urban planner Daniel Burnham back in 1905.</li> <li> Zainal Amanshah, Case Study: Entry Point Projects for the Transformation of Kuala Lumpur - fascinating approach how KL adopted a &quot;KPI&quot; approach to project development and transparency, one that could be a model for the Philippines</li> <li> David Pitchford, Case Study: Advancing Sydney&rsquo;s Competitiveness Through Waterfront Renewal - visual and content tour of specific urban renewal projects and how they have added to and improved the over global competitiveness of the greater Sydney and NSW region.</li> <li> Stephen Engblom, Case Study: Future of Smart Infrastructure and the Triple Bottom Line, technology is driving a new revolution and it&rsquo;s the cities who invest for that creative, content-driven future who will be best positioned to lead</li> </ul> </blockquote> <p>Throughout the Imagine 2060 series AECOM and Asia Society will compile the main findings from each city, build upon the discussions and publish the key insights so they are available for further input and development.&nbsp;</p> <p>The Manila launch will be followed by waterfront-focused events in Sydney, Los Angeles, and New York before the first year of the program is brought to a conclusion in Hong Kong, which is coming to terms with a new future as part of the world&rsquo;s largest metropolis &ndash; the Pearl River Delta.</p> <p>Next year, AECOM and Asia Society will explore creative and resourceful strategies for land use by cities. The third and final year of Imagine 2060 will look at the futuristic-sounding, but all too real, prospects for use of aerial space and air quality.</p> <p class="rtecenter">###</p> <p><strong>About AECOM</strong></p> <p>AECOM is built to deliver a better world. We design, build, finance and operate infrastructure assets for governments, businesses and organizations in more than 150 countries. As a fully integrated firm, we connect knowledge and experience across our global network of experts to help clients solve their most complex challenges. From high-performance buildings and infrastructure, to resilient communities and environments, to stable and secure nations, our work is transformative, differentiated and vital. A Fortune 500 firm, AECOM had revenue of approximately $17.4 billion during fiscal year 2016. See how we deliver what others can only imagine at aecom.com and @AECOM.</p> <p><strong>About Asia Society</strong></p> <p><span style="font-size: 12.8px;">Asia Society is the leading educational organization dedicated to promoting mutual understanding of Asia in a global context and strengthening partnerships among peoples, leaders and institutions across the fields of arts, business, culture, education, and policy. It is a nonpartisan, non-profit educational institution with offices in Hong Kong, Houston, Los Angeles, Manila, Mumbai, New York, San Francisco, Seoul, Shanghai, Sydney, Washington, DC and Zurich.</span></p> <p>&nbsp;</p> <p><em>Official Press Release by AECOM</em></p> <p><em>Photos by Jeffrey Siang</em></p>