[WEBCAST] India Tomorrow: Conversations with the Next Generation of Political Leaders 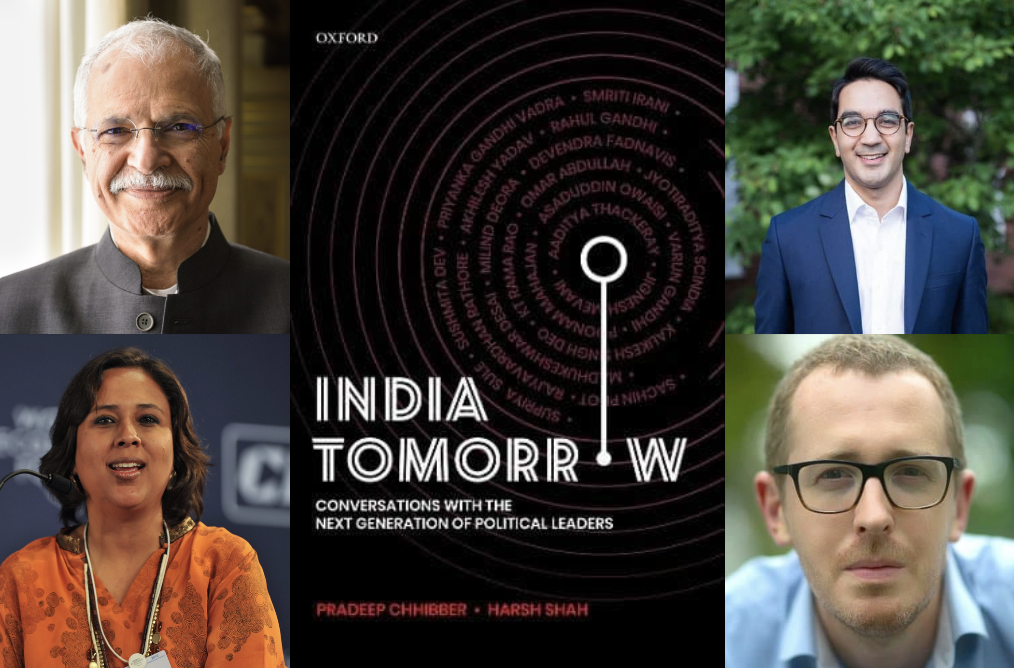 On Wednesday, October 28 Asia Society Northern California will host a book talk on India Tomorrow: Conversations with the Next Generation of Political Leaders featuring coauthors Pradeep Chhibber, professor of political science at the University of California, Berkeley and Harsh Shah, MBA candidate at Harvard Business School.  Journalist Barkha Dutt will share insights from New Delhi and the discussion will be moderated by James Crabtree, Associate Professor of Practice at the Lee Kuan Yew School of Public Policy.

The next generation of political leaders will determine India's future. We know their names, but not what lies behind what we hear or see of them in the event/news-focused coverage in newspapers and television channels. For instance, what moves them? Who inspires them? What are their passions and interests outside of politics? Where do they stand on some of India’s most contentious political issues? Do they have any regrets about their political careers? How do they explain some of the inconsistencies in their words and actions? Have their career choices come with significant personal costs? Interviewees include Rahul Gandhi; Arvind Kejriwal; Smriti Irani; Milin Deora; Aaditya Thackeray; Akhilesh Yadav, and Priyanka Gandhi.

This book provides a snapshot of contemporary Indian politics, and its future, through conversations with twenty of the country’s most prominent next-generation politicians. It explores issues and tensions that lie at the heart of Indian politics and society. In doing so, it also challenges facile and sweeping generalizations about the next generation of political leaders, compelling us to consider Indian politicians as complex, thinking individuals with unique personalities, differing visions for India, and their place in history.

Pradeep Chhibber is a professor of political science at the University of California, Berkeley. He has authored and co-authored several books including Ideology and Identity: The Changing Party Systems of India, Religious Practice and Democracy in India, The Formation of National Party Systems: Federalism and Party Competition in Canada, Great Britain, India, and the United States, and Democracy without Associations: Transformation of the Party System and Social Cleavages in India. He holds the Indo-American Community Chair in India Studies at the University of California, Berkeley.

Harsh Shah is an MBA candidate at Harvard Business School. Previously, he worked at JMI Equity in the United States and Shree Naman Group in India, along with a short recent stint at McKinsey & Company. Harsh completed his BA from University of California, Berkeley, where he studied economics and public policy, and co-founded the Berkeley Research for Contemporary India Program (BRCIP). His writing has appeared in leading Indian newspapers, including The Indian Express, The Print, The Hindu, Hindustan Times, The Economic Times, and India Today.

Barkha Dutt is an award-winning TV journalist and anchor based in New Delhi with more than two decades of reporting experience. She is the author of This Unquiet Land: Stories from India’s Fault Lines and is an opinion columnist with The Hindustan Times and The Washington Post. Dutt was part of NDTV's team for 21 years, until she left the channel in January 2017. At NDTV, Dutt was the host of the weekly, award-winning talk-show We The People as well as the daily prime-time show The Buck Stops Here.

James Crabtree (Moderator) is a Singapore-based author and journalist, and an Associate Professor of Practice at the Lee Kuan Yew School of Public Policy. His best-selling book, The Billionaire Raj: A Journey Through India’s New Gilded Age, was released in mid-2018. It was short-listed for the FT / McKinsey book of the year. Prior to academia, James worked for the Financial Times, most recently leading coverage of Indian business as Mumbai bureau chief, between 2011 and 2016. He is now a columnist for Nikkei Asian Review. At the Lee Kuan Yew School, James teaches graduate courses on leadership and communication, as well as the impact of the 2008 financial crisis.