Program 6 of 8 in our Seeking Truth Through Facts U.S.-China Program Series 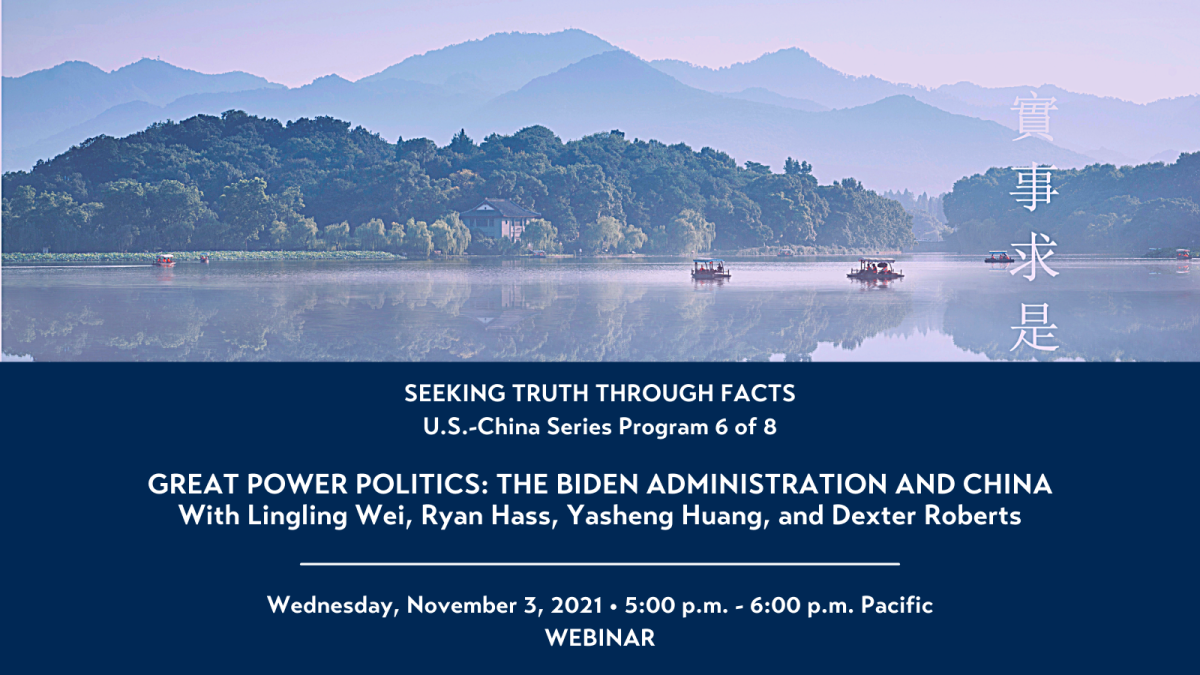 On Wednesday, November 3, 2021 from 5:00 p.m. - 6:00 p.m. Pacific, Asia Society Northern California will host a virtual program on Great Power Politics: The Biden Administration and China. Speakers include Lingling Wei, chief China correspondent for The Wall Street Journal and co-author of Superpower Showdown, Ryan Hass, senior fellow and the Michael H. Armacost Chair in the Foreign Policy program at Brookings, and Yasheng Huang, Epoch Foundation Professor of Global Economics and Management at MIT Sloan School of Management, moderated by Dexter Tiff Roberts, award-winning writer and speaker serving as a Senior Fellow in the Atlantic Council's Asia Security Initiative. This will be a public, on-the-record event.

Lingling Wei is the chief China correspondent for The Wall Street Journal and co-author of “Superpower Showdown.” She covers China's political economy, focusing on the intersection of business and politics. Born and raised in China, she has a M.A. in journalism from N.Y.U., got her start covering U.S. real estate, and has won many awards for her China coverage. In 2021, she's among a team of reporters and editors whose work was a Pulitzer Prize finalist.

Ryan Hass is a senior fellow and the Michael H. Armacost Chair in the Foreign Policy program at Brookings, where he holds a joint appointment to the John L. Thornton China Center and the Center for East Asia Policy Studies. He is also the Chen-Fu and Cecilia Yen Koo Chair in Taiwan Studies. He was part of the inaugural class of David M. Rubenstein fellows at Brookings, and is a nonresident affiliated fellow in the Paul Tsai China Center at Yale Law School. Hass focuses his research and analysis on enhancing policy development on the pressing political, economic, and security challenges facing the United States in East Asia.

From 2013 to 2017, Hass served as the director for China, Taiwan and Mongolia at the National Security Council (NSC) staff. In that role, he advised President Obama and senior White House officials on all aspects of U.S. policy toward China, Taiwan, and Mongolia, and coordinated the implementation of U.S. policy toward this region among U.S. government departments and agencies. He joined President Obama’s state visit delegations in Beijing and Washington respectively in 2014 and 2015, and the president’s delegation to Hangzhou, China, for the G-20 in 2016, and to Lima, Peru, for the Asia-Pacific Economic Cooperation (APEC) Leaders Meetings in 2016. Read his full bio here.

Yasheng Huang is Epoch Foundation professor of global economics and management and faculty director of action learning at MIT’s Sloan School of Management. From 2013 to 2017, he served as an associate dean in charge of MIT Sloan’s global partnership programs and its action learning initiatives. His previous appointments include faculty positions at the University of Michigan and at Harvard Business School.

Professor Huang is the author of 11 books in both English and Chinese and numerous academic papers and news commentaries. He is currently a co-PI in a large-scale cross disciplinary research project on food safety in China. Two books he is working on, Capitalism with Chinese Characteristics Revisited, and The Rise of the EAST, Again?, will be published 2022.

At MIT Sloan School, Professor Huang founded and runs China Lab and India Lab, which have provided low-cost consulting services to over 360 small and medium enterprises in China and India. From 2015 to 2018, he ran a program in Yunnan province to train women entrepreneurs (funded by Goldman Sachs Foundation). He has held or received prestigious fellowships such as National Fellowship at Stanford University and Social Science Research Council-MacArthur Fellowship. National Asia Research Program named him one of the most outstanding scholars in the United States conducting research on issues of policy importance to the United States. He has served as a consultant at World Bank, Asian Development Bank and OECD, and serves on advisory and corporate boards of non-profit and for-profit organizations.

Dexter Tiff Roberts is an award-winning writer and speaker serving as a Senior Fellow in the Atlantic Council's Asia Security Initiative, a Fellow at the Mansfield Center, and political science instructor at the University of Montana. He is a regular commentator on China’s global rise. Previously he was China bureau chief and Asia News Editor at Bloomberg Businessweek, based in Beijing for over two decades, and reported from all of China's provinces as well as Tibet, Xinjiang, and North Korea.

Roberts has won numerous journalism honors, including Overseas Press Club and SOPA awards. He has a bachelor's in political science from Stanford University and a master of international affairs from Columbia University. He is fluent in Chinese and studied at National Taiwan Normal University's Mandarin Training Center. Roberts' first book, The Myth of Chinese Capitalism: The Worker, The Factory, and The Future of the World, was published by St. Martin's Press in March 2020 with a Chinese edition 《低端中國：黨、土地、農民工，與中國即將到來的經濟危機》published by Gusa Publishing in March 2021. Roberts writes a China newsletter Trade War.