Program 5 of 8 in our Seeking Truth Through Facts U.S.-China Program Series 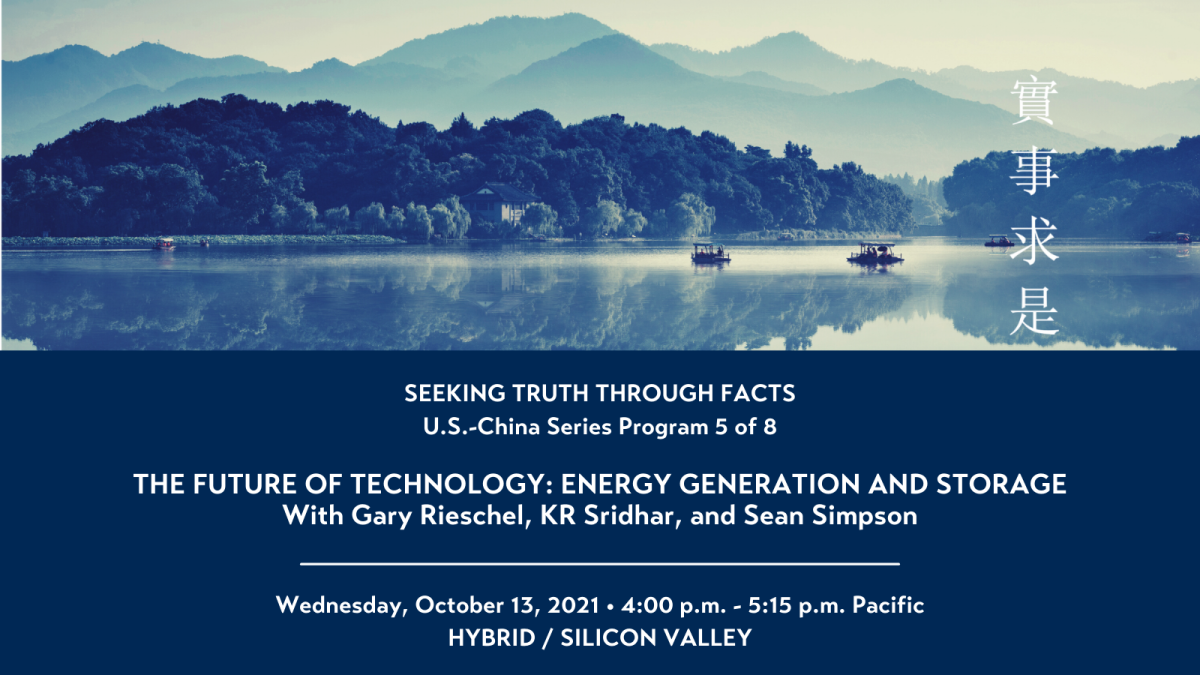 The speakers will address the evolution of technology across the energy and storage industries in the U.S and Asia.

This will be a hybrid program, with both in-person and virtual attendees.

In-person tickets are limited to 60 guests: first come, first served. All in-person attendees must show proof of vaccination with ID upon entry and have masks. Asia Society Northern California members will be given priority registration. To become a member, visit our website: https://asiasociety.org/northern-california/join-our-community

For online ticket orders, the link to join virtually via Zoom will be emailed the day before and an hour before the program is scheduled to begin. This will be a webinar program; virtual attendees will not appear on camera and will not be able to ask questions.

Gary Rieschel has over twenty-five years of successful operating and investing experience as a senior executive, entrepreneur, investor, and global business strategist. He is Founding Managing Partner of Qiming, a firm with over $3B USD focused on early stage investments in China and one of China’s premier VC firms and is Asia Society Northern California Chair. Gary’s personal investment areas are Healthcare and Cleantech. He advised the China Greentech Initiative, and the Rocky Mountain Institute in its move to China. He actively supports the US China Clean Energy Forum, PERC (Property and Environmental Research), The Nature Conservancy, the Climate Leadership Council, the Council on Foreign Relations, and the U.S. Olympic Foundation. He served on the joint venture boards of Blackrock/Bank of China and Silicon Valley Bank/Shanghai Pudong Development Bank. Gary holds a BA in Biology from Reed College in Portland, OR, and an MBA from the Harvard Business School. He lived in Japan for five years in the late 1980s and lived in Shanghai from 2005 through 2016. He now lives in Seattle, WA.

KR Sridhar is the Founder, Chairman, and CEO of Bloom Energy. Prior to founding Bloom Energy, KR was Director of the Space Technologies Laboratory (STL) at the University of Arizona where he was also a professor of Aerospace and Mechanical Engineering. Under his leadership, STL won several nationally competitive contracts to conduct research and development for Mars exploration and flight experiments to Mars. KR has served as an advisor to NASA and has led major consortia of industry, academia, and national labs. His work for the NASA Mars program to convert Martian atmospheric gases to oxygen for propulsion and life support was recognized by Fortune Magazine, where he was cited as “one of the top five futurists inventing tomorrow, today.” As one of the early pioneers in green tech, KR also serves as a strategic limited partner at Kleiner Perkins Caufield & Byers and as a special advisor to New Enterprise Associates. He has also served on many technical committees, panels and advisory boards and has several publications and patents. KR received his bachelor’s degree in Mechanical Engineering with Honors from the University of Madras (now called NIT, Trichy), India, as well as his master’s degree in Nuclear Engineering and Ph.D. in Mechanical Engineering from the University of Illinois, Urbana-Champaign.

Dr. Sean Simpson is the Chief Scientific Officer and Founder of LanzaTech. He founded LanzaTech in 2005 in New Zealand and relocated the company to the US in 2014. LanzaTech has successfully developed, scaled, and commercialized a novel industrial platform for the manufacture of sustainable fuels and chemicals. The company has raised over US$500 million in investment, and recently spun out a new company (LanzaJet) that will produce sustainable aviation fuel and diesel. Sean sits on the board of Two New Zealand-based start-up companies Avertana, and Dotterel, as well as serving on the investment committee of the early-stage venture investment group Outset Ventures. Sean has published over 20 journal articles and 200 patents. His awards include the 2015 US Environmental Protection Agency (EPA) Presidential Green Chemistry Award, 2014 New Zealand Innovator of the Year Award, and the 2013 Kea NZ World Class New Zealander in Science.