The Fukushima Disaster 10 Years On: Lessons To Never Forget 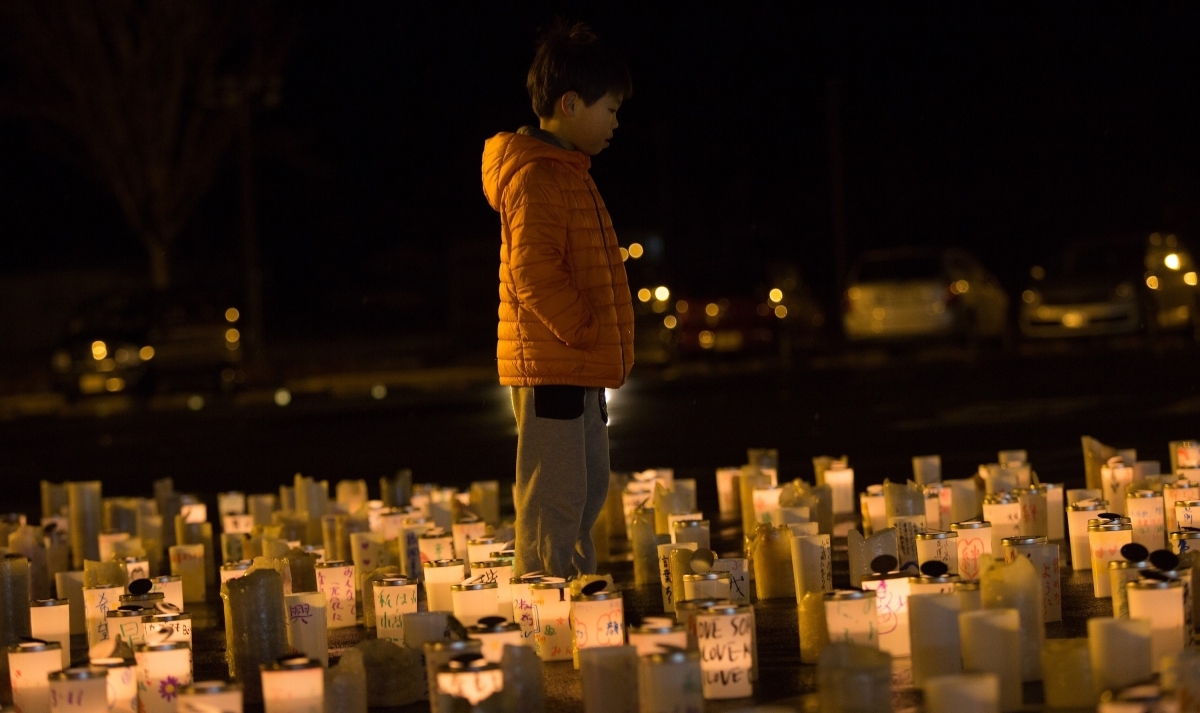 A boy in Minamisoma, Fukushima looks on during a ceremony to commemorate the victims of the earthquake and tsunami that claimed more than 18,000 lives, and subsequent nuclear disaster at the Fukushima Daiichi Nuclear Power Plant (Ken Ishii/Getty Images).

Tune in on Monday, March 1 at 3:00 p.m. Pacific for the live video webcast. #AsiaSocietyLIVE

This program is in collaboration with Asia Society Japan, New York and Northern California and is complimentary and open to the global community.  No advanced registration is required.  To watch live on Youtube, visit this webpage on Monday, March 1 at 3:00 p.m. Pacific and click the "Watch Live on Youtube" button that appears to the right.

March 11th marks the ten-year anniversary of the devastating earthquake and tsunami that struck Japan in 2011, natural disasters which led to a series of explosions and meltdown at the nuclear plant in Fukushima. Formally referred to as the Great Eastern Japan Disaster (Higashi Nihon Daishinsai), it was one of the gravest crises in Japan’s post-World War II history. The displacement of over a hundred thousand residents and the invisible spread of radioactive contamination from this catastrophe shook Japan and the world.

Asia Pacific Initiative (API) Chairman Yoichi Funabashi and Asia Society Policy Institute and former Assistant Secretary of State for East Asian and Pacific Affairs Daniel Russel will lead a discussion on what has transpired in the last ten years. The conversation will focus on an API report that looks at the recovery and lessons learned from the disaster, which follows up on a report published in 2012, The Fukushima Daiichi Nuclear Power Station Disaster – Investigating Myth and Reality. They will be joined by Professor Kazuto Suzuki and Akihisa Shiozaki, both experts who led the study.  What lessons were learned - from both the disaster and the reconstruction policies that followed? How prepared is Japan should natural disaster strike again?

This program is complimentary and open to the global community.  No advanced registration is required.  To watch live on Youtube, visit this webpage on Monday, March 1 at 3:00 p.m. Pacific and click the "Watch Live on Youtube" button that appears above.

To find out more about the VIP Reception, contact Palarp Jumpasut (pjumpasut@asiasociety.org), Director of Partnerships at Asia Society Northern California.

Sawako Hidaka is Executive Director of Asia Society Japan. She is an executive with 25 years of experience managing corporate services at global financial institutions, most recently as Head of General Services and Vendor Management at Metlife Insurance K.K., and previously as Vice President, Corporate Services and Real Estate at Goldman Sachs Japan Ltd. Earlier in her career she worked at the Solomon R. Guggenheim Museum in New York  following her diploma in fine and decorative arts at The Study Centre for the History of Fina and Decorative Arts in the UK. She is a graduate of Gakushuin University and the London School of Economics and Political Science.

Yoichi Funabashi is Chairman of the Asia Pacific Initiative. He was editor-in-chief of the Asahi Shimbun, and is an award-winning journalist, columnist, and author. He is the author of What is a Think Tank?: An Era of Policy Entrepreneurship (2019), and Countdown to Meltdown (2012) on the Fukushima Daiichi Nuclear Accident, for which he was given the Oya Soichi Nonfiction Award in 2013. In 2016, he became the first Japanese laureate of Stanford University's prestigious Shorenstein Journalism Award. As co-founder and Chairman of Rebuild Japan Initiative Foundation (RJIF), he oversaw the Independent Investigation Commission on the Fukushima Daiichi Nuclear Accident. The resulting report was ranked in the top 24 policy reports produced by a think-tank in the 2012 Global Go-to Think Tank Ranking. He is a member of the International Institute for Strategic Studies Advisory Council.

Akihisa Shiozaki is a partner at Nagashima Ohno and Tsunematsu, one of Japan’s leading law firms, and Auditor at the Asia Pacific Initiative. He is widely recognized for his expertise in the fields of regulatory compliance and crisis management. He previously served as senior policy advisor at the Prime Minister’s office and is the co-lead investigator of the Independent Investigation Commission on the Japanese Government’s Response to COVID-19, and previously served as a working group member for Independent Investigation Commission on the Fukushima Daiichi Nuclear Power Station Disaster. In 2017, he was recognized by The Asian Legal Awards as the Compliance / Investigations Lawyer of the Year.

Kazuto Suzuki is Professor of Science and Technology at the Graduate School of Public Policy at the University of Tokyo, Japan, and Senior Consulting Fellow at the Asia Pacific Initiative. He received his Ph.D. from Sussex European Institute, University of Sussex, England. He is lead for the Fukushima 10-year project. From 2013 to 2015, he was part of the Panel of Experts for the Iranian Sanction Committee under the United Nations Security Council. His research focuses on the intersection of science/ technology and international relations; and on subjects including space policy, non-proliferation, export control and sanctions. Among many works, his most recent includes Space and International Politics (2011) which was awarded the Suntory Prize for Social Sciences and Humanities, and Policy Logics and Institutions of European Space Collaboration (2003).

Daniel Russel (Moderator) is Vice President for International Security and Diplomacy at the Asia Society Policy Institute (ASPI). Previously he served as a Diplomat-in-Residence and Senior Fellow with ASPI for a one year term. A career member of the Senior Foreign Service at the U.S. Department of State, he most recently served as the Assistant Secretary of State for East Asian and Pacific Affairs. He served at the White House as Special Assistant to the President and National Security Council Senior Director for Asian Affairs, where he helped formulate President Obama’s strategic rebalance to the Asia Pacific region, including efforts to strengthen alliances, deepen U.S. engagement with multilateral organizations, and expand cooperation with emerging powers in the region. Among many roles at the Department of State, he served as Director of the Office of Japanese Affairs and U.S. Consul General in Osaka-Kobe.

Ambassador John V. Roos served as the United States Ambassador to Japan from 2009-2013. On August 6, 2010 he became the first sitting U.S. Ambassador ever to attend the commemoration ceremony of the atomic bombing in Hiroshima. Ambassador Roos’ service in Tokyo coincided with the devastating 9.0 earthquake, tsunami, and nuclear crisis on March 11, 2011. Following this tragedy, Ambassador Roos led the American effort on the ground in support of Japan’s response to the multi-dimensional and unprecedented disaster. After the crisis, Ambassador Roos led the creation of the TOMODACHI initiative, a public-private partnership that has established more than 320 exchange programs.

This program is made possible in partnership with the Asia Pacific Initiative.