with the Honorable Kevin Rudd 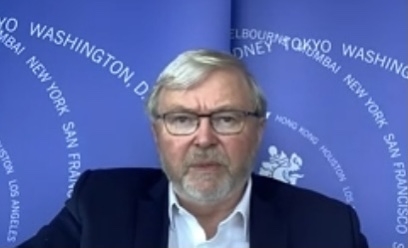 On June 9, 2021 President and CEO of Asia Society and 26th Prime Minister of Australia Kevin Rudd addressed VIPs on China’s National Ambitions under President Xi: Technology, Economy, Military, Taiwan and Hong Kong. Some of the topics addressed include the arc of the U.S.-China relationship over the past five years, the Chinese government's campaign for the upcoming 2022 Party Congress, the future of President Xi Jinping, sanctions against EU academics from the Chinese government, how technology might be the great fracture between the U.S. and China, how the U.S. administration should respond to the South China Sea's dispute, and the debate over the origins of the COVID-19 virus. This discussion was moderated by Margaret Conley, Executive Director of Asia Society Northern California.