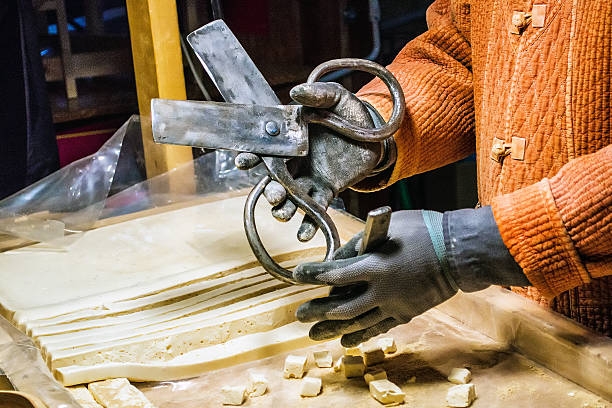 As a part of the Leo Gala Series to give wider publicity to Korean culture and promote its beauty beyond the facade, Asia Society Korea brings you the story of the Korean yeot, the traditional Korean confectionery which comes in different shapes and colors.

As the winter chill approaches, many Koreans instantly sense that the yearly College Scholastic Ability Test, also known as the Korean college entrance exam, is right around the corner. As important as it is, the whole country takes the day very seriously: companies change their office hours to avoid causing rush-hour traffic jams in the morning; police, taxi drivers, motorcyclists, and sometimes even ambulance drivers volunteer to stay on call to escort students; and during the English listening exam, no planes are allowed to fly nor land. And for this crucial day, there is a traditional confectionary that acts as a ‘lucky charm’ for students, yeot.

Yeot is a type of hangwa (한과), Korean sweet, and an overarching term that defines a range of traditional confectionaries made with ingredients rich in starch such as rice, sweet rice, corn, or different types of potatoes. Depending on the region, the ingredients may differ but the preparation method is usually the same. To make yeot, the main ingredient selected is steamed, lightly fermented with malt, then squeezed to separate the liquid. The liquid is simmered in a large pot called a sot(솥) until the liquid has a consistency of syrup. This syrup is called jochung (조청), a liquid form of yeot. Jochung is used in various dishes instead of sugar or honey. When jochung is spread on a large surface and hardened, gang yeot (갱엿) is made. Sometimes additional ingredients such as nuts are added to gang yeot. Gang yeot is often too hard to consume as it is, so people often shave it or break it down into smaller pieces.

The type of yeot that is often given to students near or on the day of the college entrance exam has a texture close to that of taffy. It is probably the most familiar type of yeot to Koreans as well. To make the taffy-like yeot, jochung is spread and left to harden but before it becomes gang yeot, it is stretched multiple times to add thin layers of air. This particular type of yeot is sticky. Once it sticks to your teeth, it is hard to remove. Therefore, this taffy-like yeot is given to students in hopes that they ‘stick’ to the university they wish to attend.

Contrary to its distinction as a ‘lucky charm’ during the exam season, yeot can also be used in the context of a curse. “To feed yeot” (엿 먹이다) is a well-known phrase that can even be found in the dictionary with the definition ‘to fool or mess with a person.’ It is often used as ‘eat yeot’(엿 먹어라), ‘screw you,’ or at times just ‘yeot’ (엿) could suffice as a curse word. There are also various other negative expressions with yeot that closely relate to yeot’s sticky consistency. Scholars have debated how this particular confectionary developed into a word with a negative connotation that is often used as a swear word, despite it being a scarce, sweet treat in the past. Some scholars believe that yeot has been used as a curse from the Joseon Dynasty while another well-known theory claims that it started from a question about yeot on a middle-school entrance exam in the 1960s. Nevertheless, yeot, a traditional Korean confectionary with a unique sweetness, is certainly to reappear in local shops and markets just in time for this year’s college entrance exam.

Amid the COVID-19 pandemic, this year’s entrance exam was postponed to December 3rd from November 19th. Students taking the exam this year have endured this challenging and stressful year of 2020 with diligence, patience, and dedication. Asia Society Korea wishes all examinees the best of luck on the exam!