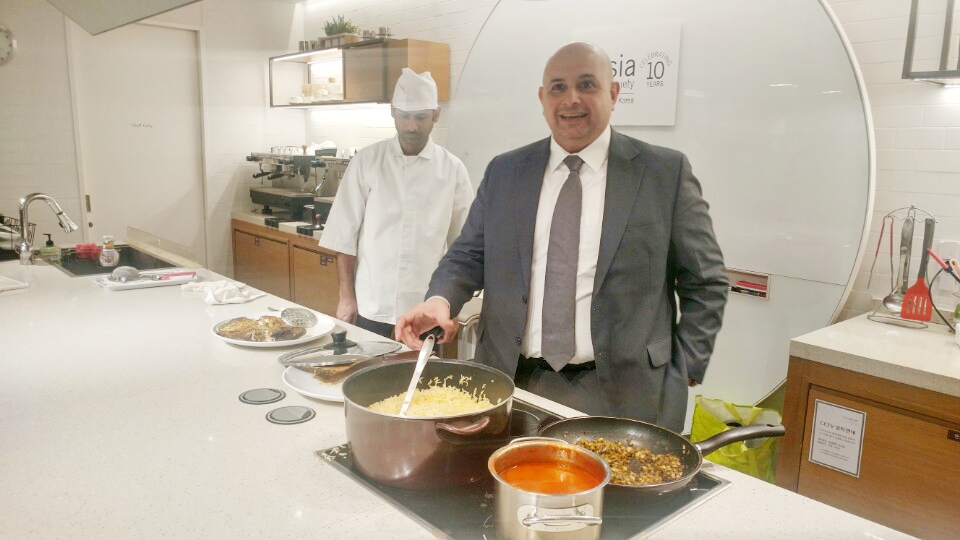 November 17, 2017 - Asia Society Korea held its sixth cooking class of the year by welcoming the Embassy of Kuwait and H.E Bader Mohammad Al-Awadi, who helped cook a traditional Kuwaiti dish at the main branch of Lotte Department Store. The ambassador and two professional Bangladeshi chefs showed the ten participants how to make a Kuwaiti version of murtabak, a dish made by stuffing fish with basmati rice and spices. Before the discovery of the oil reserves in Kuwait in 1938, the country relied heavily on trade with the Indian subcontinent. This trade included foods such as basmati rice and various spices, which has helped shape Kuwaiti cuisine and has many similarities with Indian food.

The murtabak presented to the cooking class was a home-cooked version of the dish often enjoyed by the ambassador and his family and involved stuffing pomfret fish with curry powder, spices, and rice. Those in attendance expressed great interest in the exotic cooking method and enjoyed tasting news spices and flavors. This simple dish is adaptable and can be made using a variety of different fish and fillings. While waiting for the food to cook, the participants watched a video about Kuwait and asked questions to the ambassador before eating the dish with their hands, Kuwaiti style.