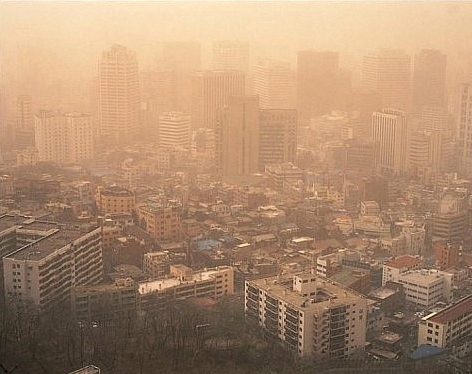 In less than one month a phenomenon dating back to the second century AD will take place - the arrival of “Hwang Sa” or Yellow Dust in Korea. Originating in the deserts of Northern China and Mongolia, Yellow Dust is whisked into the atmosphere by strong winds and carried to the Korean Peninsula via the jet stream. Other than reduced visibility, when the dust arrives it brings along industrial pollutants (like pesticides), viruses, fungi, bacteria, and even heavy metals, none of which are good for respiratory health. Over time, the heavy metals and industrial pollutants also damage crops and soil, meaning the contamination is not restricted to humans.

Health Risks: When Yellow Dust reaches an unhealthy concentration, around 400 micrograms/cubic meter, people are warned to limit their outdoor activity, especially in regards to heavy exercise and sports. Healthy people can develop sore throats and dry eyes, and children, the elderly, and people with previous respiratory health conditions are advised to remain indoors. In some cases the concentration of Yellow Dust will exceed 800 micrograms/cubic meter, whereupon schools will be closed, outdoor events cancelled and a general warning issued to stay indoors unless going outside is absolutely necessary.

Economic effects: The impact of Yellow Dust on the economy is often difficult to measure due to the delayed and inconsistent nature of the phenomena. The immediate impact is obvious - food stands and market stalls are forced to close in order to protect food and merchandise, equipment and inventory stored outside must be covered. Indoor businesses feel the pain of decreased foot traffic from people staying at home instead of eating out at restaurants or shopping. The longer term impact of Yellow Sand can be seen in the build-up of potentially harmful compounds in people’s bodies, leading to higher numbers of asthma diagnoses and doctors visits. The effects of the Yellow Dust also carry striking long-term implications for food safety and according to NEMA (the National Emergency Management Agency) the Agricultural and Livestock Industry must carefully clean and disinfect greenhouses, pastures and barns so that animals do not contract dust-borne diseases.

Future Implications: China (with the help of South Korea) has begun planting trees in an effort to slow desertification, however only time will tell if their methods prove effective. Reports have surfaced claiming many of the newly planted trees have been overwhelmed by sand and dust storms, leaving many toppled over or half-buried in the very soil they were intended to protect. If ecological conditions continue to deteriorate, scientists and analysts predict the harmful economic and environmental impact of Yellow Dust will rise to even higher levels. The implications are at once scary and simple - in a globalized and industrialized world, natural and ecological disasters have consequences that reach far beyond the borders of any one country. Halting the spread of desertification and thereby decreasing the severity of Yellow Dust provides the perfect opportunity for meaningful cooperation between countries in Asia.

Stay Informed: You can check the air quality in real time at sites like Air Korea: (http://www.airkorea.or.kr/)