Conversation with Ronnie Chan on Philanthropy 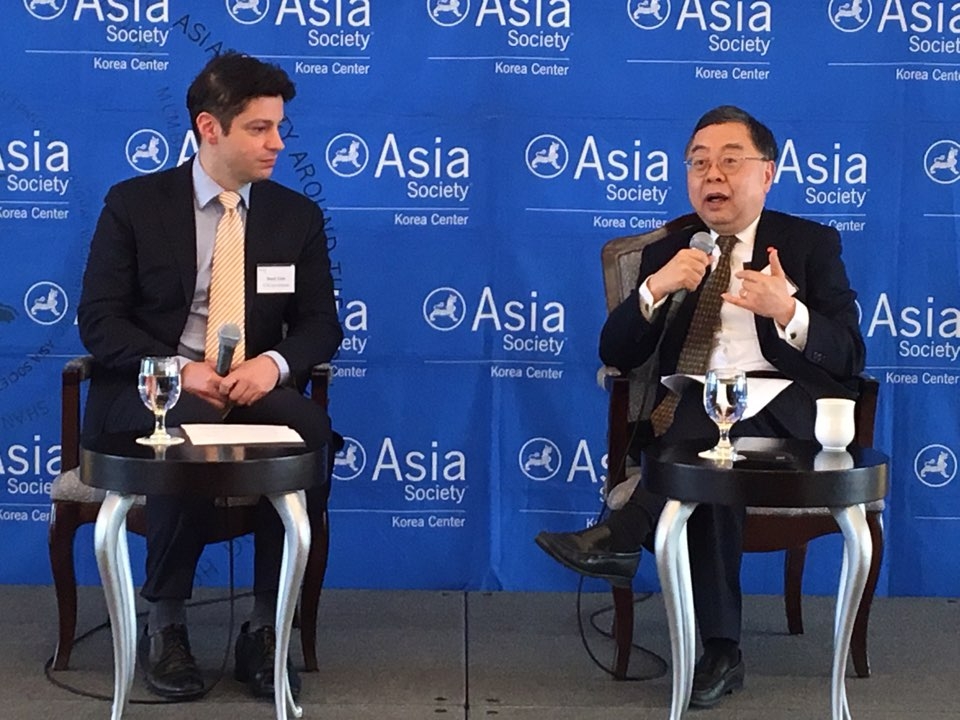 Wednesday, February 17, 2016 - The Asia Society Korea Center held its first Monthly Luncheon of 2016 on Tuesday at the Lotte Hotel, Seoul. The event took on added significance as it coincided with the hosting of the Asia Rising Series and ASKC was pleased to welcome Ronnie Chan, Co-Chairman at the Global Asia Society, for a “Conversation on Philanthropy”. Mr. Chan is the Chairman of Hang Lung Group Limited and was recently described in a South China Morning Post article as being "a positive volcano of energy, entrepreneurship and ideas". The conversation was moderated by Mark Tetto, Asia Society Korea Center member and local businessman.

The opening remarks were given by Josette Sheeran, the seventh president and CEO of Asia Society, who spoke about how Mr. Chan has helped transform Asia Society to an updated vision of what John D. Rockefeller would have wanted if he were still alive. Ms. Sheeran went on to comment on how Mr. Chan is a leader in philanthropy with education, youth, public health and occupational therapy especially important to him. In 2014, his family gave the biggest gift ever recorded to Harvard University which helped fund the $350 million Harvard Chan School of public health. Ms. Sheeran is now spending a third of her time in Asia having moved to Hong Kong in order to have more time at all of the centers in the region. This stemmed from an idea from Mr. Chan who also insisted that the Asia Society board should be made up of 50% of people who are actually living in Asia, making it one of the most unique in the world with business leaders and thought leaders from throughout Asia and United States.

Mr. Chan then spoke about how he became involved in the Asia Society following his attendance at the very first dinner held in Hong Kong in 1990. He became interested in the programs offered by the Asia Society as a way of continuing his education and he saw it as a place where he could really learn. He was a regular at these programs until Sir Q.W Lee, the founding Chairman of the Hong Kong Center, asked Mr. Chan to succeed him as Chairman. Mr. Chan explained how he served as Chairman from 1994 until 1999 before forming an advisory body which would help establish a permanent home for the Hong Kong Center with the erection of a new building. In 2011 he became the first ever Co-Chair on both sides of the Pacific Ocean which reflected the rise of global interdependence and growing regional partnerships.

As the conversation continued, Mr. Chan was asked to describe his ethos or philosophy towards philanthropy. Outside of his philanthropy towards the Asia Society, Mr. Chan does many things and gives across many spheres and he talked about how he chose the spheres in which he participates. Mr. Chan explained how he was just a lucky guy who was just born into a wealthy family who wanted to follow in the legacy of his father in terms of growing the business and in relation to philanthropy. The dialogue provided a fascinating insight into philanthropy and was thoroughly enjoyed by all those in attendance.

*For a full transcript of the Converstaion, please click here.