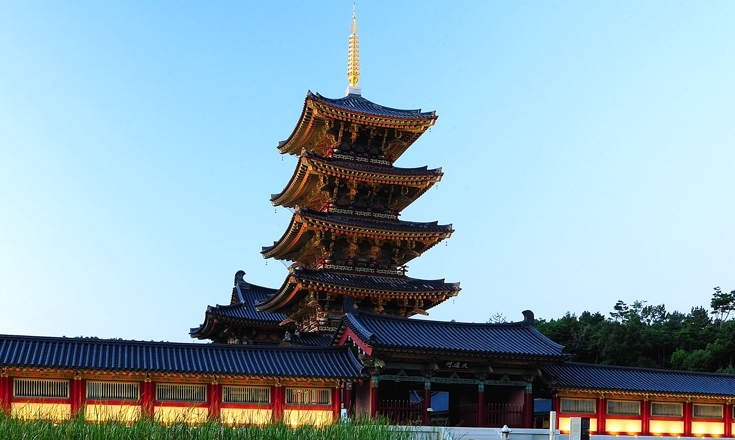 This month’s travel series will see us step back in time once more to educate ourselves on another part of the peninsula’s expansive history. On this occasion we will experience what life was like in the Baekje Kingdom. Baekje is recognized as one of the Three Kingdoms alongside Goguryeo and Sillia, and it existed from 18BC to 660AD. The kingdom was founded by King Onjo and was regarded for its great maritime power, which was significant as it resulted in the dissemination of Buddhism throughout East Asia. Baekje also maintained strong political and trade relations with both China and Japan during its existence.

In 1994, the Korean government set out to bring Baekje back to life. Given the scope of the project, it is no surprise that completion was not reached until 2010. In fact, it is the largest historical theme park in the country and many famous buildings have been reproduced as replicas. Since the complex is so big, it is possible to get overwhelmed, so we would recommend dividing your visit between some key areas.

First, take some time to explore Sabigung Palace, an area of 14 buildings that were all constructed using ancient palace architectural design. Junggungcheon, Donggungjeon, and Seogungjeon are particularly interesting as they recapture what life was like in the buildings of Baekje that were used for carrying out political, administrative, and military affairs. Neungsa is a great second stop with the photogenic royal temple acting as an excellent glimpse into one of the kingdom’s places of worship. After you have taken some selfies in front of the pagoda, drop by the tombs (Gobungongwon) to see how the noble classes were remembered after death, and then head directly to the Living Culture Village.

This stop is possibly the most enjoyable as you get to see how the citizens of Baekje spent their days, with a myriad of houses dedicated to all the different artisans of the time. You will probably be ready for a bite to eat now, but do not take too long as there is still more to see!

Your final stop should be the Baekje Historical Museum, which provides a comprehensive account of life all those years ago with an array of excavated relics throughout the exhibition. Furthermore, the are a number of documentaries and other visual medias that make for a very interesting and informative experience.

Baekje Cultural Land is a bit of trip for those coming from Seoul, but the area is well worth a visit. The best way to get there by public transport is to take a two-hour intercity bus ride from Seoul Nambu Bus Terminal to Buyeo. At the terminal you should transfer to a local bus that is bound for the Korea National University of Cultural Heritage. You can see Baekje Cultural Land as soon as you step off the bus.

Baekje Cultural Land is a great day out for all ages. Fun, informative, and so beautiful that it was actually used in a number of films and television programs. Get there while the weather is still not too chilly!