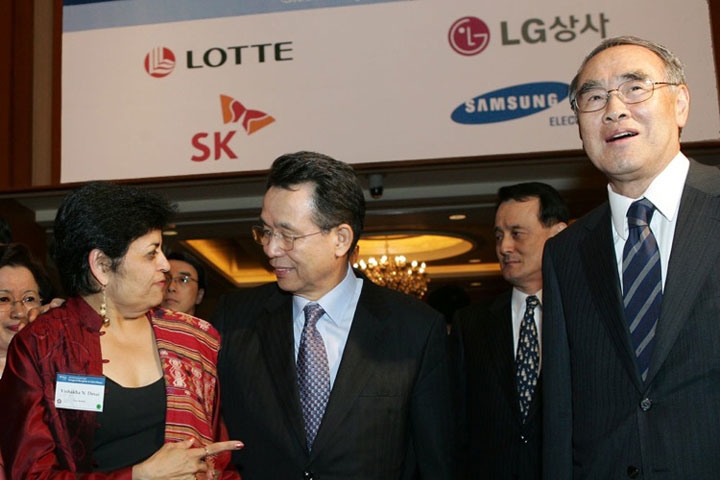 
On June 3, Jamie Metzl, Executive Vice President of Global Asia Society, visited Seoul and met with the Asia Society Korea Center’s Advisory Board to discuss the strategic plan and program development for the Center.

Ambassador Oh Joon, the Deputy Minister of Foreign Affairs for Multilateral, Global, and Legal Affairs for the Republic of Korea, presented his views on Multilateral Diplomacy at the Korea Center’s first monthly luncheon series at the Lotte Hotel. During his presentation, Joon focused on South Korea’s foreign policy position regarding human rights issues in North Korea, economic relations with China, and South Korea’s support for the United Nation’s Millennium Development Goals.  Oh also commented that South Korea is no longer a small nation but one that is rapidly attaining both economic success and political presence worldwide, and thus has even more responsibilities and commitments to the international arena.

The Asia Society Korea Center sponsored a special film screening of the movie Crossing at the Pony Chung Memorial Hall on June 24. Kim Tae-Kyun, the director of the film, also attended the screening. Crossing is a South Korean film based on true accounts of North Korean defectors, and depicts the daunting challenges those defectors continue to face. I  was also chosen as the official Korean entry for the Academy Awards for Best Foreign Language Film.

The Asia Society Korea Center and the United States Embassy Seoul jointly hosted the Chicago Children’s Choir performance at the Hyundai Development Company’s Pony Chung Memorial Hall. The cultural event proved to be an excellent way to promote American culture to various sectors of the Korean society. Founded in 1956, the Chicago Children’s Choir (CCC) is a multiracial, multicultural choral music education organization.  The Choir currently serves 2,600 children ages 8 to 18 through choirs in 46 schools.  Under their Artistic Director Josephine Lee, who is Korean-American, the Choir has undertaken many highly successful international tours.  This was the Choir’s first tour to Korea and 55 selected singers performed a repertoire reflecting the breadth of the Concert Choir’s artistry, ranging from classical to world music, including traditional Korean songs in Korean.

John Walker, Chairman of the Macquarie Group of Companies in Korea, presented his views on internationalizing Korean financial firms at the Korea Center’s July luncheon event.  Walker pointed out the differences in between local and international financial firms and gave his perspective on how to develop and lead local firms that aspire to become more global.  Walker emphasized the importance of local and global cooperation for increasing healthy business competition, and also suggested that a shift from a "rules-based" approach to a "principles-based" approach should occur within Korea firms in order for them to become even more effective at home and abroad.

Evan Ramstad of the Wall Street Journal and Jie-ae Sohn of CNN in Korea were both invited to speak on "raising Korea’s profile from a media perspective," during the Korea Center’s August luncheon event, in which they outlined the key differences in between Korean and Western media firms.  Ramstad and Sohn highlighted recent international events that were influenced by Korean media, and stressed the importance of initiative, integrity, and individual excellence as the pillars of responsible journalism.

James Tyrrell, Executive Director of Jones Lang & LaSalle in Korea, provided ASKC's luncheon audience with a PowerPoint presentation on the Songdo Reconstruction Project, which highlighted the New Songdo City Master Plan.  Tyrrell elaborated on the master plan for this new city and its value as Seoul becomes more and more populated. The master plan reflects a strategy that applies state-of-the-art green practices in urban design, engineering, construction, infrastructure, and energy systems. After the presentation, Tyrrell took questions from the audience and stated that he was also planning to live in the new city as well.

Dr. Michael Green, Senior Adviser for the Center for Strategic and International Studies (CSIS) and Associate Professor of International Relations at Georgetown University, presented to the Asia Society Korea Center’s audience at the Lotte Hotel, Seoul. Green discussed issues concerning North Korea, China, Japan, and South Korea as they relate to U.S. foreign policy.  Green also elaborated on the presidential election and his thoughts about each candidate. The audience, filled with international security and foreign policy enthusiasts, were quite delighted to hear Green express his views on the northeast Asian region.