USA, China and the Future of Global Trade 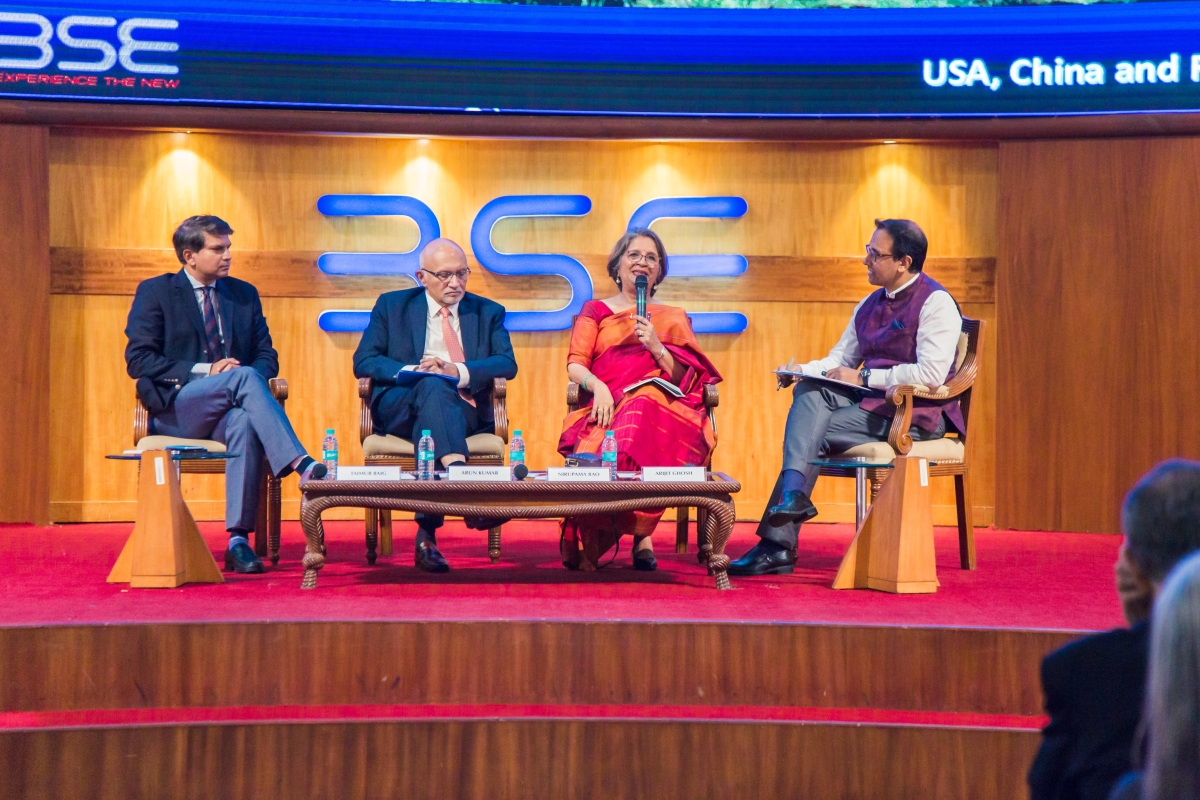 MUMBAI: On 5th September 2019, Asia Society India Centre hosted Ambassador Nirupama Rao, former Foreign Secretary of India and former Ambassador to USA and China; Mr Arun Kumar, Chairman and CEO, KPMG India; Dr Taimur Baig, Managing Director and Chief Economist, DBS Bank and Mr Arijit Ghosh, South Asia Managing Editor, Bloomberg for a discussion on the possible consequences and opportunities arising from a global trade war between USA and China, and how it could shape the future of the global economy. The programme was the second part of the Future of Asia Series for this year.

Mr Kumar started the discussion by speaking about the US-China trade war as a clash of worldviews and the urge of national self-preservation. He gave a historical perspective through the 19th century opium wars between Britain and China due to trade deficit wrought by Chinese tea, comparing it to today’s trade war where China wants to even out the trade deficit of the US through its technology. He went on to describe how the perception of either countries of the other is disconnected, which leads to hurting mutual interest in areas where they need each other. He also spoke about the distortion of markets in China due to state-owned enterprises.

Ambassador Rao spoke about the impact of what has been termed as the “grandest collision in history” is being felt by all as countries, economies and markets. Reflecting on the current trading system in the world, she said that the concept of multilateralism is being called into question with a rise in regional and free trade agreements. She commended the restraint of the Chinese reactions to the American tariffs. India feels the strain of this trade war despite not being part of the global supply chain because of its strategic partnerships with both US and China.

Dr Baig spoke about the difficulty in withdrawing tariffs once imposed without being perceived as pandering to the beneficiary country, in this case China, and how the trade war cannot be resolved quickly and will outlast President Trump for decades. He discussed the cost of the trade war, in terms of companies extending operations in countries like Vietnam without shutting shop in China to avoid its fury, as also the inability of countries like Vietnam, Thailand, Malaysia, or Mexico in providing the economies of scale like China does. He spoke about the challenge posed by the trade war to the model of growth and development for India.

Mr Ghosh’s questions related to the Smoot-Hawley tariffs of the US in the 1930s which led to the Depression, and if the situation today is comparable to it. He also referred to the possibility of a recession in the US due to the prevailing circumstances. He spoke about the role of China in global growth and whether it was only bound to grow despite the trade war. He also asked about the role of investors in these conditions.

The discussion was followed by an engaging session of audience Q&A.