Understanding China and Its Rise: The 'Civilization-State' | Asia Society Skip to main content

Understanding China and Its Rise: The 'Civilization-State' 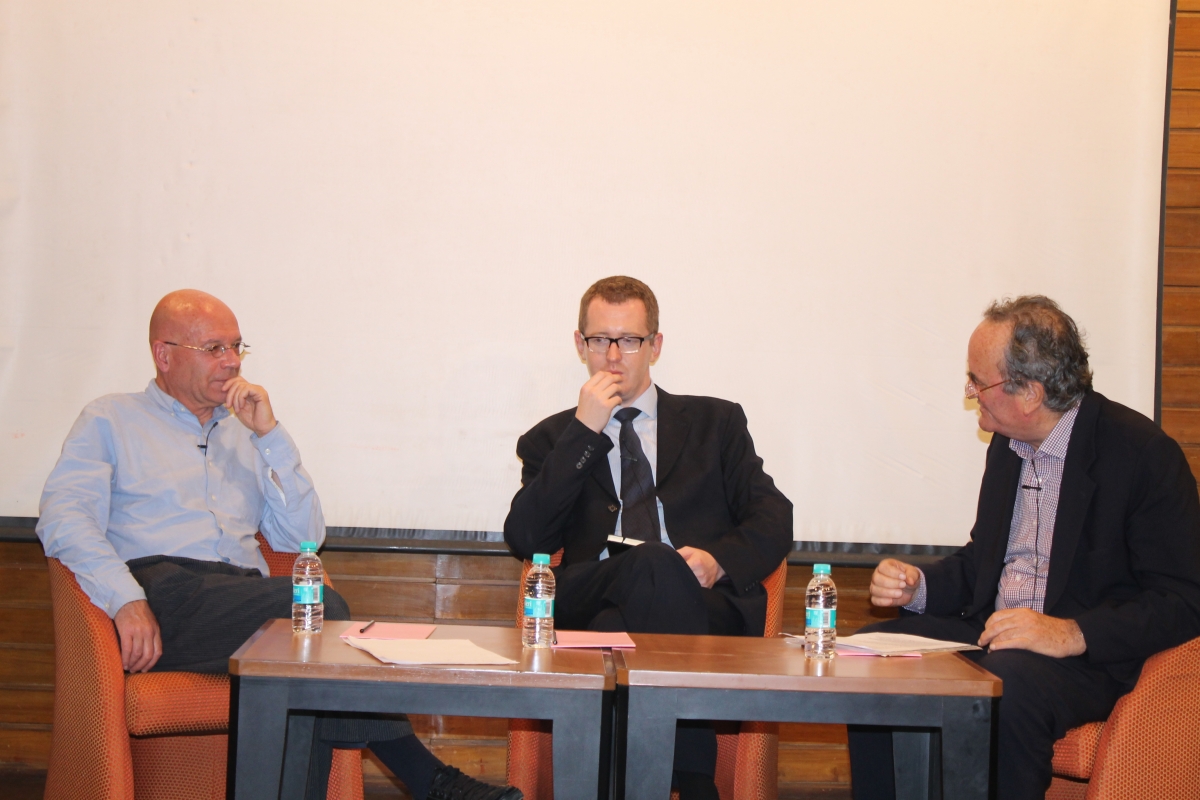 MUMBAI, July 31, 2012 — "The biggest desire for the West has been to understand China through the Western prism. I think that is why the Western perception and prognosis of China is so frequently wrong."

This was a central thesis of the case made here by Martin Jacques, author and scholar on modern China, in an Asia Society discussion with Sir Mark Tully, Former Bureau Chief of the BBC in New Delhi, that was chaired by James Crabtree, Head Financial Times Bureau in Mumbai. The discussion focused on Chinese identity, Western and Indian perceptions of China and China's future role within Asia and the rest of the world in terms of both economic and foreign policy.

Jacques began by discussing his theory of China as a "civilization-state," a function of a unified population and strong integration with government. "The importance of maintaining the unity of China as a civilization, as a state, as a civilization-state, is the most important political imperative for Chinese politicians," Jacques claimed. "We [the West] believe the government's reach should be restrained. The Chinese have a completely different view, they view [government] as the head of the family. This represents a profoundly different relationship between the state and society that we find in the West." According to Jacques, following and believing in the state is, for the Chinese, "an expression and embodiment of Chinese civilization."

Citing the Hong Kong handover in 1997, Jacques argued that the Chinese government's adaptability was shown by implementing special economic zones and semi-autonomous representation under the slogan of "one country, two systems." Jacques even claimed that Taiwan, in the near future, could be swayed to accept Chinese sovereignty: "[The Chinese] may say, in principle, 'as long as you accept Chinese sovereignty over Taiwan, you can keep multi-party system, universal suffrage, even some autonomy for your armed force,' because what matters to China is the question of sovereignty — but their conception of sovereignty is separate from the Western nation-state perception of sovereignty. For the Chinese, sovereignty is separate from system."

Jacques went on to discuss the Communist Party of China's ability to navigate China as a future global power. He claimed that while China's governing systems may be different from that of the United States, they still have the potential to grow as influential. "Many people in the West and India think the state is the Achilles heel of China… but the Chinese state is a remarkable institution and is, in my view, the great strength of China. It is a hugely competent institution that has presided over the most remarkable economic transformation in human history… There is a widespread belief that modernization implies Westernization, but I don't think that will happen within East Asia."

Following his talk, Jacques began an armchair discussion with Tully and Crabtree to answer questions about future trends and similarities between the Chinese and Indian economies. Citing challenges facing Chinese businesses — the undervalued renminbi (RMB), transitioning from a low-tech to high-tech economy — Tully and Crabtree claimed fundamental weaknesses may exist within the Chinese economy. Jacques admitted there is still a long road for China in terms of economic success: "I don't think the next 30 years [of economic growth] will be like the last 30 years, things will certainly become more complex… but different systems account for the extraordinary contrast between China and India." Jacques also discussed how he has encountered many questions about comparing the rise of China and India following the economic crisis.

For Jacques, "India seems to be distracted by China." He claimed that as long as border and economic tensions remain between China and India, India will suffer in the long term. "India does not feature nearly as prominently in the Chinese outlook as the China features in the Indian outlook — this is one thing I have been puzzled by here… comparing the economies of China and India is chalk and cheese. They are at such different points on the development curve… it's silly thinking to compare the two."

Zooming out on his analysis, Jacques discussed the newly vital role of developing nations in the expanding global economy and cited the United States's diminishing role as an example of the developing world's expansion. "The United States will be unable to account for the same percentage of global GDP, so America may become steadily less important in the world. One of the key questions is, how does America adapt to that? Will America recognize and accept it, or fiercely resist it? Will [the U.S.] encircle China one way or another… The point is, the world order is being reconstructed towards and by the developing world."

This event was presented in collaboration with the Mohile Parikh Center as part of our Future of Asia series, with outreach partnership from the British Deputy High Commission Mumbai, British Council, Think Social and Tata Institute for Social Sciences.