The Parsi Kitchen | Anahita Dhondy in Conversation With Manu Chandra 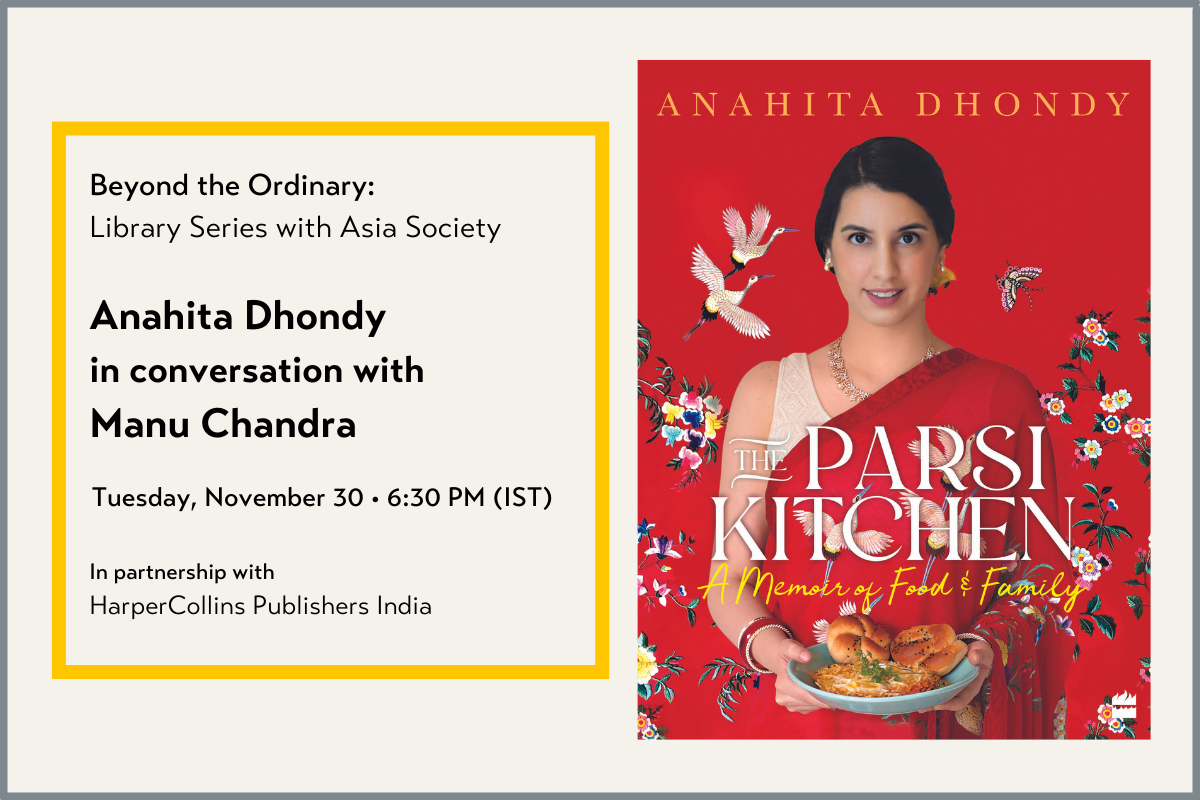 “It’s been eight years since I made that pivotal decision to take the plunge with Parsi food, and every year I have evolved both as a chef and as a person. I want to give readers a peek into everyday life in a Parsi household. A bit of bickering, some amazing anecdotes and, of course, classic recipes handed down through the generations”, writes chef Anahita Dhondy in her latest book The Parsi Kitchen: A Memoir of Food and Family, published by Harper Collins India.

Forbes Asia’s ‘30 under 30’ and former chef–partner at SodaBottleOpenerWala, Anahita has spent the last decade taking her culinary heritage to ambitious new heights. The Parsi Kitchen is a warm and whimsical memoir about how she embraced the cuisine that she grew up with.

Weaving together stories of the close-knit, loving and slightly wacky family, Anahita writes with passion about being raised in a food-filled household. From an heirloom Ravo recipe handed down from her grandmother to a Bombay Duck creation inspired by her travels through Gujarat—the tales behind her beloved dishes are a joyful read. A treasure of memories and beautifully photographed recipes, The Parsi Kitchen is a delightful ode to food, flavours and family.

Join us for a conversation between chefs Anahita Dhondy and Manu Chandra as they unravel the secrets behind the making of The Parsi Kitchen, a treasure trove of recipes and memories and a book to be savoured.

This programme is the third in Season One of Beyond the Ordinary: Library Series with Asia Society, a curated series of book discussions spotlighting extraordinary literary voices and worlds from across South Asia. Developed in partnership with HarperCollins Publishers India, the first season focuses on extraordinary non-fiction writing from India. It features creative professionals from across sectors that are presenting unique perspectives on the world through memoirs, reportage and analytical study.

Anahita Dhondy pursued her culinary dream first by enrolling into the Institute of Hotel Management, Aurangabad, where she graduated at the top of her class in Culinary Arts. After training at the Taj Group of Hotels and JW Marriott, she went on to acquire a Grande Diplome from Le Cordon Bleu, London. On her return to India, at age 23, Anahita joined SodaBottleOpenerWala, part of the Olive Group of Restaurants, as Chef Manager. Anahita represented India and SodaBottleOpenerWala at the EAT Forum 2018 and the UN-affiliated Chefs’ Manifesto in Stockholm and London in 2018. She’s won several awards, including the Times Food Guide & Nightlife Award for Noteworthy Newcomer (2013) and Condé Nast Traveller’s Innovator of the Year (2018).

In 2019, Anahita featured on the Forbes Asia 30 Under 30 list for her contribution towards food sustainability and for popularising Parsi cuisine. She was awarded ‘Indian of the Year’ in the hospitality sector as Chef Manager SodaBottleOpenerWala in 2017. She worked in an all-women cooking TV show aired on Living Foodz called “Femme Foodies”.

Manu Chandra is the former chef partner of the Olive Group of restaurants. He is responsible for the first of its kind Gastropub brand – Monkey Bar in Mumbai, Bangalore and Delhi; the trendy Asian Gastro Bar The Fatty Bao in Mumbai, Delhi and Bangalore and Toast & Tonic – the East Village inspired International restaurant and bar in Bangalore.

Manu enrolled at the Culinary Institute of America (CIA) Hyde Park, New York, where he apprenticed with some of the City’s most celebrated kitchens, including Restaurant Daniel, Le Bernardin, Gramercy Tavern, Café Centro, Jean Georges and Town and also opened the now legendary Mandarin Oriental Hotel in Manhattan. He has collaborated with the German modular kitchen brand Nolte for The Social Kitchen campaign, which focuses on making the kitchen the heart of urban homes, and has been a curator at Serendipity Arts Festival, where he where he explored indigenous cultures around cuisines, through lectures and tasting series with the view that art and food can overlap.