Orienting: An Indian in Japan | Pallavi Aiyar in conversation with Namita Devidayal 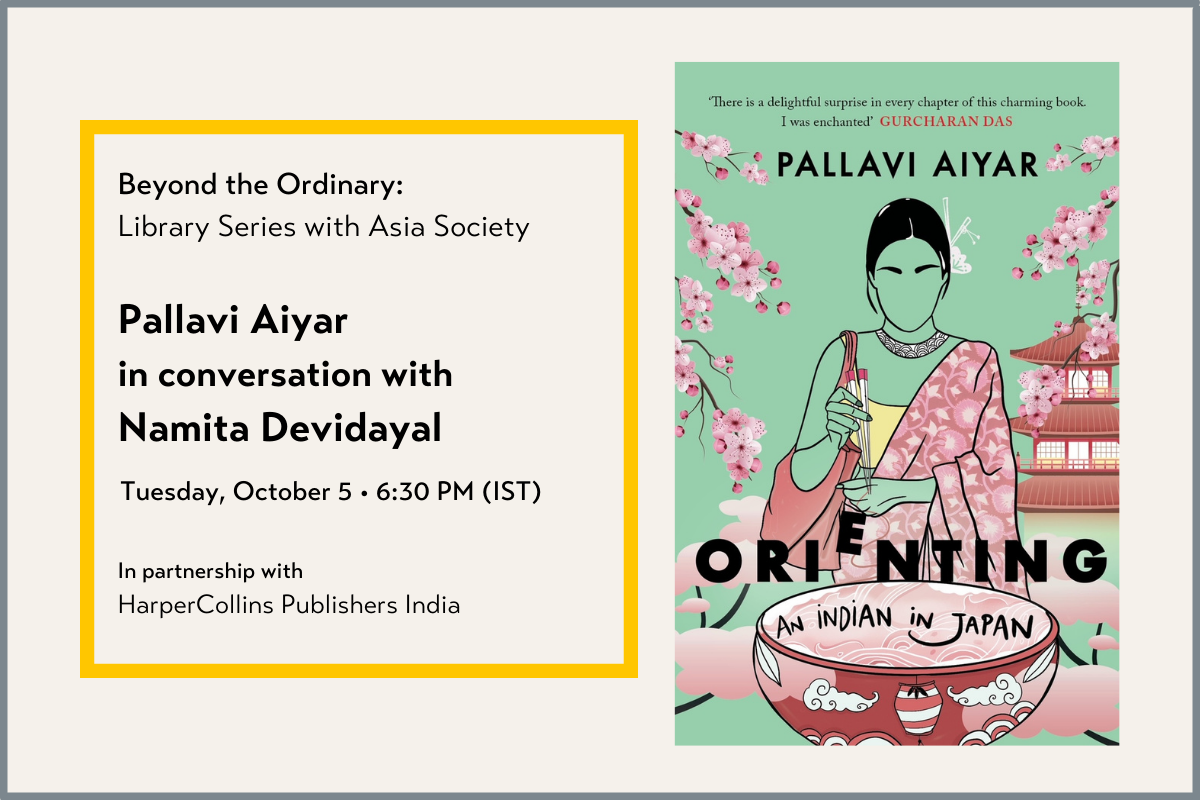 How is Tokyo, a city of thirty million people, so safe that six-year-old children commute to school on their own? Why are there no trashcans in Japanese cities? Are there really seventy-two seasons in the country? Why are Ganesha idols in Japanese temples hidden from public view?

Globe-trotting journalist Pallavi Aiyar moves to Japan and takes an in-depth look at the island country including its culinary, sanitary and floral idiosyncrasies. Steering through the many (mis)adventures that come from learning a new language, imbibing new cultural etiquette, and asking difficult questions about race, Aiyar explores why Japan and India find it hard to work together despite sharing a long civilizational history.

Part travelogue, part reportage, Aiyar’s new book Orienting: An Indian in Japan, published by HarperCollins Publishers India, is an endearing and sensitive memoir of her time in Japan that provides remarkable insights into the shared pasts and cultural linkages between India and Japan.

Asia Society India Centre, in partnership with HarperCollins Publishers India, presents a conversation between journalists Pallavi Aiyar and Namita Devidayal as they delve into the making of Aiyar’s book, her experiences of living and working in a country like Japan, and the landscape of non-fiction writing in India today.

This programme is the first in Season One of Beyond the Ordinary: Library Series with Asia Society, a curated series of book discussions spotlights extraordinary literary voices and worlds from across South Asia. Developed in partnership with HarperCollins Publishers India, the first season focuses on extraordinary non-fiction writing from India. It features creative professionals from across sectors that are presenting unique perspectives on the world through memoirs, reportage and analytical study.

Pallavi Aiyar is an award winning journalist, who has worked as a foreign correspondent for over two decades reporting from China, Europe, Indonesia and Japan. She is Associate Editor of The Globalist and writes a weekly substack newsletter on global culture, The Global Jigsaw. Pallavi is a Young Global Leader of the World Economic Forum and has served on the WEF's Global Council on the Future of Media and Entertainment. She is the author of several books including the China-memoir, Smoke and Mirrors, the novels, Chinese Whiskers and Jakarta Tails, and an exploration of contemporary Europe's challenges, New Old World. Pallavi was a Reuters Fellow at Oxford University and is the youngest winner of the Prem Bhatia memorial prize for political reporting for her dispatches from China. She is currently based in Madrid.

Namita Devidayal is a journalist with The Times of India and the author of three books -- The Music Room, Aftertaste, and The Sixth String of Vilayat Khan. She is now writing a webseries set in Mumbai.