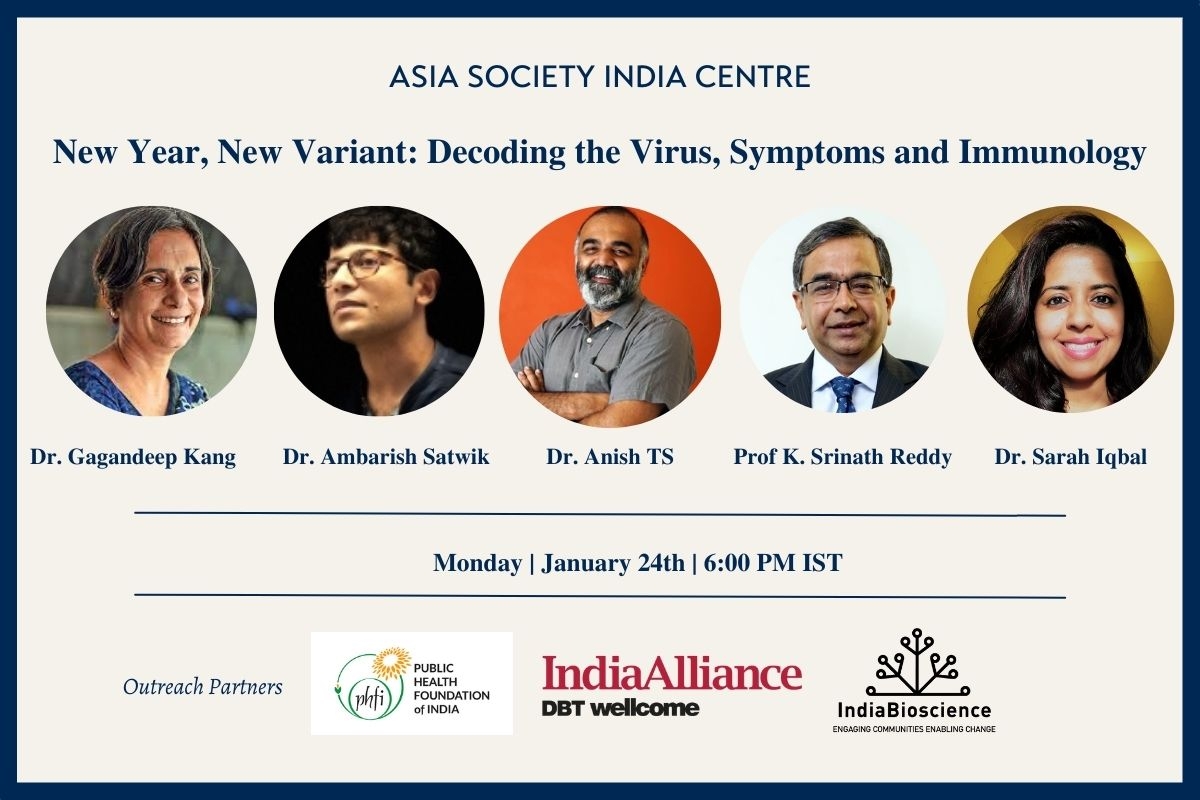 India reported its first case of the Omicron variant on December 2nd 2021. On January 5th 2022, the Indian Government announced that the effective reproductive rate (R) of the new variant was 2.69, with each Omicron patient infecting 2.69 others, on average. The rise in cases however has been faster and steeper with the current seven-day average of new cases rising from 8600 levels in early December to over 1,72,000 as of January 12th. While the prevailing discourse suggests that vaccination may not entirely curb the spread of the virus, it can definitely contain its virulency. The low to moderate hospitalization numbers are a welcome relief since it is learned that home quarantine and medication should suffice. However, WHO warns against categorizing the variant as mild and continues to stress the importance of vaccinations and precautionary protocols.

As of 2nd December 2021, the country’s vaccination coverage had crossed a little over 1.25 billion, vaccinating 49% of the adult population with two doses. Amid the new variant’s detection, India on 10th January 2022 started administering booster doses to front-line workers and vulnerable groups. However, there are several conflicting arguments regarding boosters and their efficacies. Moreover, vaccinations for children and its delayed administration has raised severe concerns. Numerous other questions are also being raised on the long-term impact of omicron, its contribution to developing herd immunity, symptoms that differentiate it from other variants, testing protocols and policies and the potential of the emergence of new mutations, strains and variants in a yet inadequately vaccinated global population. Thanks to misinformation, conflicting reports and excessive reportage on the issue, there is both a placid acceptance and nonchalance at one end of the spectrum and fear and anxiety at the other.

With states all over India resorting to some forms of lockdown yet again, there are lingering arguments if this is an economically sustainable precautionary measure. According to a team at the Indian Institute of Science and Indian Statistical Institute, Bangalore, India’s third wave is expected to peak sometime in the third week of January. So, what are the lessons learnt from the past two years? How immunologically prepared is the country’s population for this third wave? Is Omicron leading to natural immunity or coinciding with waning immunity? How equipped is the healthcare system in India to address the challenge of increased hospitalization as compared to previous waves.

Dr. Gagandeep Kang is a Professor of Microbiology, at the Wellcome Trust Research Laboratory, Division of Gastrointestinal Sciences at the Christian Medical College (CMC) in Vellore. She also serves on the board of Coalition for Epidemic Preparedness Innovations (CEPI). She has worked on the development and use of vaccines for rotaviruses, cholera and typhoid, conducting large studies to define burden, test vaccines and measure their impact. Dr. Kang is a member of several advisory committees for the WHO, mainly related to research and use of vaccines.

Dr. Ambarish Satwik is a Delhi-based vascular and endovascular surgeon and writer. He is Director of the Vascular Cath Lab at Sir Ganga Ram hospital and Professor of Vascular Surgery, GRIPMER. Dr. Satwik is the author of the critically acclaimed novel Perineum: Nether Parts of the Empire. The book has often been introduced as a rogue and deviant (fictive) sexual history of the British Raj. His columns, miscellanies and opinion pieces on a variety of subjects have been published in India Today, Outlook, Open, Tehelka, Time Out and Hindu Business Line, amongst others.

Dr. T. S. Anish is an Associate Professor (Community Medicine) at the Government Medical College, Thiruvananthapuram (affiliated with Kerala University of Health Sciences) is an epidemiologist with many publications in infectious disease epidemiology. He is a public health consultant with the Kerala State Disaster Management Authority and a member (Epidemiologist) of the State Expert Panel of COVID-19. He won the 'Sardarilal Memorial Award' for the best research publication in The Indian Journal of Sexually Transmitted Diseases and AIDS in the year 2012. He is a well-known writer and orator in the Malayalam language on public health-related matters.

Prof.K. Srinath Reddy is the President of Public Health Foundation of India and formerly headed the Department of Cardiology at All India Institute of Medical Sciences, New Delhi. He was appointed as the First Bernard Lown Visiting Professor of Cardiovascular Health at the Harvard School of Public Health (2009-13) and presently serves as an Adjunct Professor of Epidemiology at Harvard University. He was the President of the World Heart Federation. He holds advisory positions in several national and international bodies. Prof Reddy recently published a book ‘Make Health in India: Reaching A Billion Plus’. He is the first Indian to be elected to the National Academy of Medicine, USA and was awarded several prestigious doctorates and fellowships. He is a Padma Bhushan awardee. He is also an Advisor to the Governments of Odisha and Andhra Pradesh on health.

Sarah Iqbal is a researcher in natural sciences and a public engagement practitioner. Currently, she works as an independent consultant at the Foundation for Advancing Science and Technology. Dr Iqbal serves as a strategic adviser to the India Science Festival. In the past, she worked at the Indian science funding agency, DBT/Wellcome Trust India Alliance as the Communications and Public Engagement Lead. She has created and led projects such as the Superheroes Against Superbugs, The Explorer Series (India), Arting Health for Impact (International) and Planet Divoc-91 (International) among others. Sarah has published in various academic journals, serves on several advisory boards and has been the founding editor of the Oxford University Biochemical Society journal – Phenotype.