Kama: The Riddle of Desire 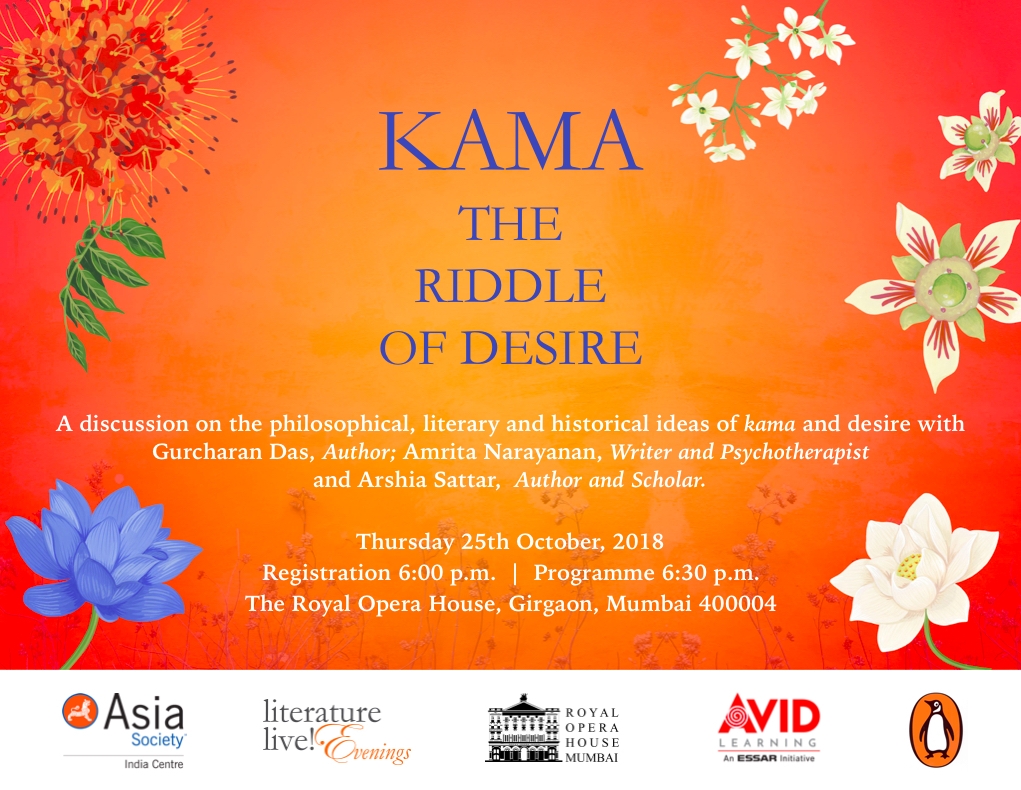 In Hindu philosophy, kama - the third purushartha (aims of human life), is defined as desire, longing and pleasure, of which sexual pleasure is considered essential for the well-being of an individual. In mythology, Kama is personified as the deity Kamadeva or Manmatha, and in some puranas he is depicted as Brahma's son, whose five arrows trigger the five effects of desire - fascination or attraction, followed by disturbance, burning, desiccation and destruction.

India is perhaps the only civilization to elevate kama – desire and pleasure – to a goal of life. Kama is both cosmic and human energy, which animates life and holds it in place. Gurcharan Das in his new book, Kama: The Riddle of Desire, weaves a compelling narrative, soaked in philosophical, historical and literary ideas in the third volume of his trilogy on life's goals: India Unbound was the first, on artha, 'material well-being'; and The Difficulty of Being Good was the second, on dharma, 'moral well-being'. In Kama, he examines how to cherish desire in order to live a rich, flourishing life, arguing that if dharma is a duty to another, kama is a duty to oneself. It sheds new light on love, marriage, family, adultery and jealousy as it wrestles with questions such as these: How to nurture desire without harming others or oneself? Are the erotic and the ascetic two entwined aspects of human nature? What is the relationship between romantic love and bhakti, the love of god? Join us in this exploration of the role of kama in our lives, with Gurcharan Das, Author, in conversation with Amrita Narayanan, Writer and Psychotherapist and Arshia Sattar, Author and Scholar.

Gurcharan Das is a commentator, public intellectual and author of a number of best-selling non-fiction works. He has also written a novel A Fine Family (Penguin, 1991) and an anthology Three Plays (Penguin, 2011). He writes a regular column for the Times of India and six Indian language newspapers and occasionally for the Financial Times, the New York Times and others. He studied philosophy at Harvard and was CEO of Procter & Gamble India before becoming a full-time writer. He is general editor for Penguin’s 15 volume Story of Indian Business.

Amrita Narayanan straddles the two worlds of professional psychoanalytic psychotherapy and writing. She holds a doctorate in clinical psychology and has a private practice in Goa. As a writer, her central preoccupations have been women, sexuality and identity. She has been published in academic journals as well as popular press periodicals in India and abroad. Her most recent work is an edited anthology The Parrots of Desire: 3000 years of Erotica in India (Aleph Books, 2018).

Arshia Sattar has a PhD from the Dept. of South Asian Languages & Civilizations at the University of Chicago, and her areas of interest are Indian epics, mythology and the story traditions of the subcontinent. Her acclaimed English translations of Valmiki’s Ramayana and the Kathasaritsagara are Penguin Classics. She has also written two books for children, Kishkindha Tails and Pampa Sutra. Most recently her publications include Lost Loves: Exploring Rama’s Anguish (Penguin India, 2011) and The Best of Quest (Westland Books, 2011).