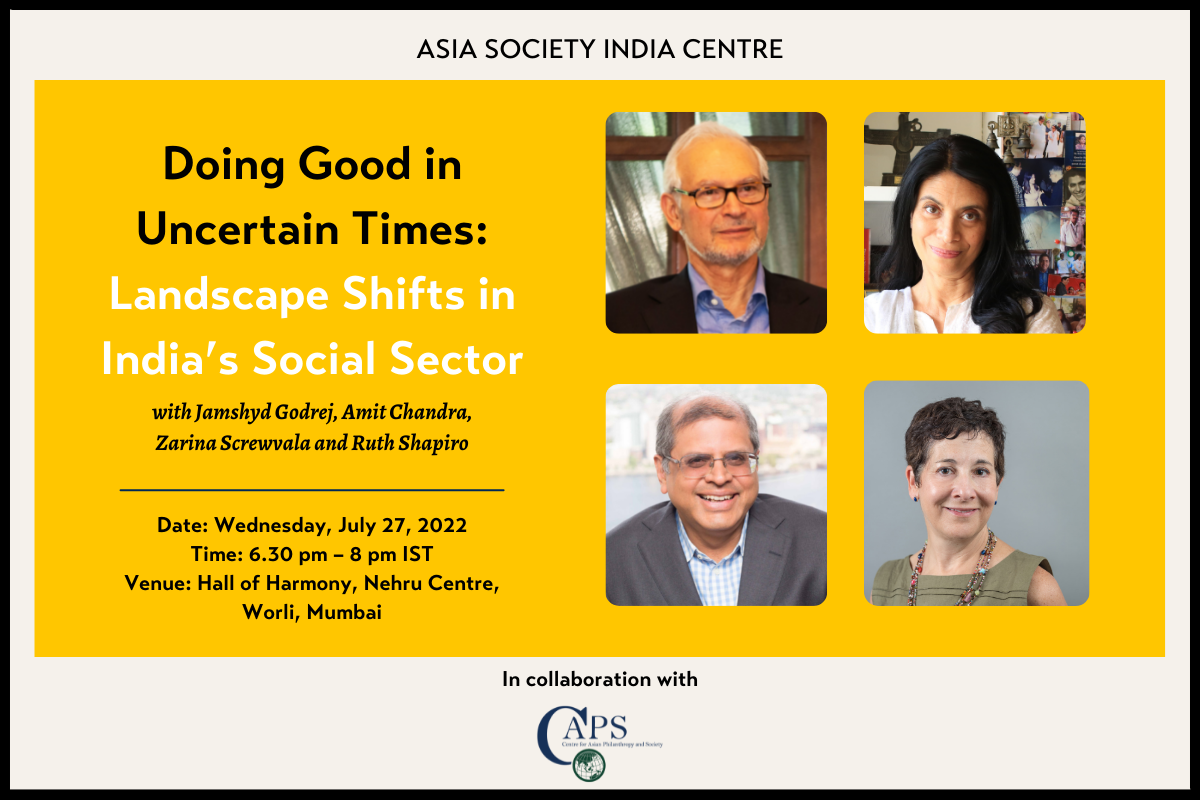 Covid-19 has exacerbated inequalities, and hard-won progress in social and economic growth has been undone. An estimated two-thirds of those newly forced into poverty live in South Asia, East Asia and the Pacific.

Despite significant hurdles during and after the pandemic, India’s social sector has demonstrated extraordinary resilience and stepped up in a multitude of ways to help those in need. Going forward, however, all parts of society—individuals, companies, government and the social sector—must work together to drive more resources towards building a better future. Governments must find a balance between regulations that support transparency and accountability of social sector organizations on the one hand, and ease of doing good on the other. Companies can help mitigate talent, capacity and funding shortages for nonprofits. Donors can step up by being nimbler in their giving for a more rapid and effective response.

Join us for a discussion on 27 July 2022 featuring CEO of Godrej & Boyce Ltd Jamshyd Godrej, Founder and Managing Trustee of Swades Foundation Zarina Screwvala, and Managing Director of Bain Capital India Amit Chandra at the Hall of Harmony, Nehru Centre in Worli. The discussion will be moderated by the CEO of the Hong Kong-based Centre for Asian Philanthropy and Society (CAPS) Dr. Ruth Shapiro.

Dr. Shapiro will kick off the discussion with a brief presentation of the Doing Good Index 2022—a biennial CAPS study which spans 18 markets in Asia including India. The Index sheds light on the factors which enable or impede private social investment (which includes philanthropy, CSR and impact investing). It also offers insights on how India’s social sector and doing good ecosystem is faring in comparison to the rest of Asia. Significantly, it provides a roadmap for mitigating the trust deficit; leveraging local support; and facilitating cross-sector collaboration.

Following the presentation, the expert panel will discuss the extraordinary ways in which the social sector responded in India during and after Covid-19, and how to support nonprofit organizations going forward. They will also deliberate upon the broader shifts in the funding and regulatory landscape in India in recent times that have both helped and hindered the social sector. Panellists will provide their perspectives as India’s leading philanthropists on the policies and practices that can unleash more capital toward impact.

Jamshyd N. Godrej is the Chairman of the Board of Godrej & Boyce Manufacturing Company Limited. Godrej is the former Chairman of Ananta Aspen Centre (previously known as Aspen Institute India), Chairman & Trustee of Ananta Centre. He is the Chairperson of the Board of Directors of Shakti Sustainable Energy Foundation, India Resources Trust and Council on Energy, Environment and Water. He is also the Director of World Resources Institute, USA. In addition to being a Trustee of World Wide Fund for Nature – India, Godrej is also a Trustee of the Asia Society, USA. He is also a member of the Board of Governors of the Centre for Asian Philanthropy and Society. In the past, he has served as the President of the Confederation of Indian Industry and the Indian Machine Tool Manufacturers’ Association. His profile of work also includes his Chairmanship at the CII Sohrabji Godrej Green Business Centre. The President of India conferred on Godrej the Padma Bhushan award on 3rd April 2003.

Amit Chandra joined Bain Capital Private Equity in 2008 as a member of its Asia-Pacific leadership team. He is the founder and Chairman of its India office. Prior to joining Bain Capital, Chandra spent most of his professional career at DSP Merrill Lynch, a leading investment bank in India. He retired from DSP Merrill Lynch in 2007 as a Board Member & its Managing Director. Chandra has worked at India's leading engineering & construction firm, Larsen & Toubro. Over the years Chandra has served on the Boards of many leading corporates and not-for-profit organisations including Tata Sons, Genpact, Ashoka University, Piramal Enterprises, Emcure Pharmaceuticals, Akanksha Foundation, Tata Investments, and Give India. Along with his wife, he received the “Asia Heroes of Philanthropy Award” in 2016. In the year 2007, he was named by the World Economic Forum as a Young Global Leader.

Zarina Screwvala is an Indian entrepreneur and philanthropist. In 1990, Zarina co-founded United Television (UTV). She is an award-winning producer of numerous TV shows. From 2004 onwards she led UTV’s entry into the broadcast space where she created and launched several highly successful channels. In 2011, after UTV was divested to the Walt Disney Company, Zarina moved full-time to philanthropy, working to empower rural India through the Swades Foundation which she co-founded with her husband. The Foundation has a mission to empower 1 million lives every 5-6 years through a unique 360-degree development approach which includes Health, Education, Water & Sanitation and Economic Development. Along with her team, her work has positively touched 2,700 hamlets across the Raigad & Nashik districts of Maharashtra impacting over 748,000 people from 160,000.Zarina is deeply interested in philosophy, which she peruses as a member of New Acropolis Cultural Organization.

Dr. Ruth A. Shapiro is the Co-Founder and Chief Executive of the Centre for Asian Philanthropy and Society (CAPS), a research and advisory non-profit organization based in Hong Kong and working throughout Asia. Dr Shapiro is the primary author of Pragmatic Philanthropy: Asian Charity Explained, published by Palgrave Macmillan in January 2018. She is the editor of The Real Problem Solvers, a book about social entrepreneurship in America. She also co-authored the book, Building Energy Efficiency: Why Green Buildings are Key to Asia’s Future. She has published articles in Nikkei Asia, the South China Morning Post, Alliance and Philanthropy Impact and is a regular speaker on issues related to private social investment in Asia. Dr. Shapiro founded the Asia Business Council and served as its Executive Director since its inception in 1997 until May 2007. She spent the early part of her professional career in the field of international development. Within this field, she held management positions and built new program areas at the Academy for Educational Development, the Harvard Institute of International Development and Global Outlook.