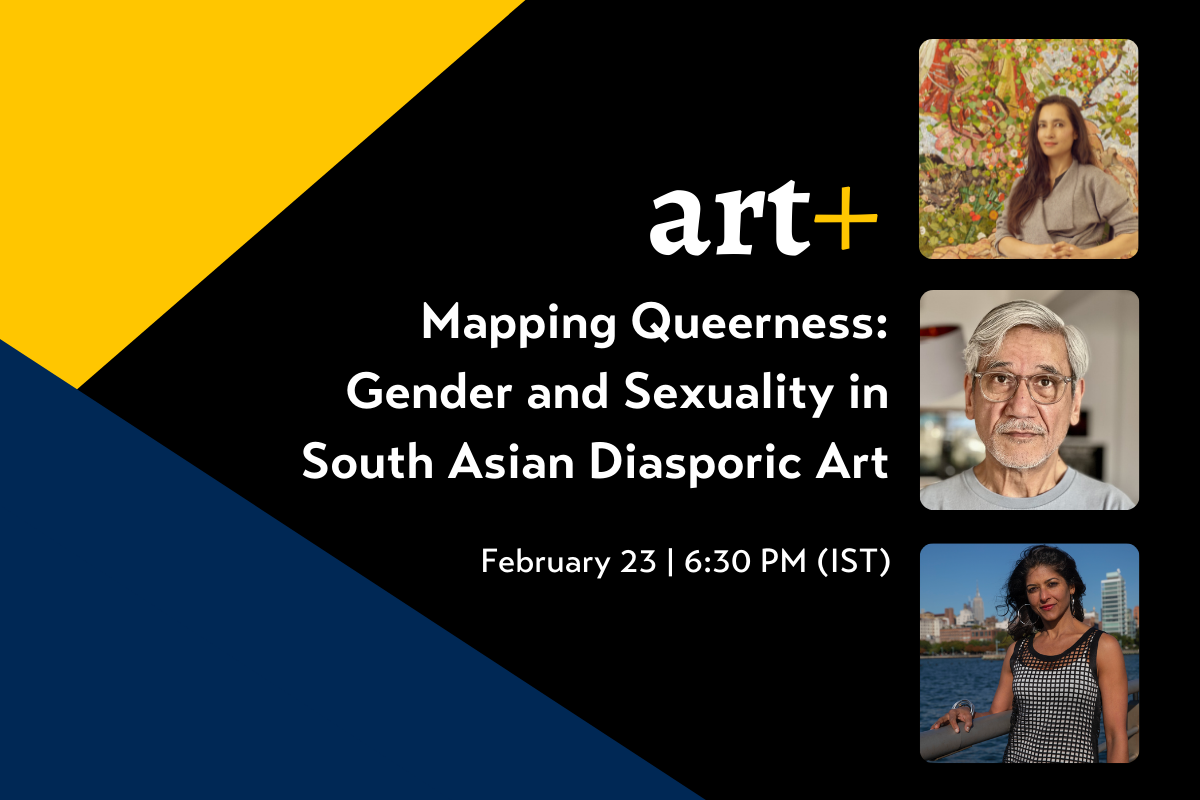 “The aesthetic practices of queer diaspora... disrupt the normative ways of seeing and knowing that have been so central to the production, containment, and disciplining of sexual, racial, and gendered bodies”, writes Gayatri Gopinath, Associate Professor of Social and Cultural Analysis and Director of the Center for the Study of Gender and Sexuality at New York University, in her book Unruly Visions: The Aesthetic Practices of Queer Diaspora (2018). “They do so, crucially, through a particular deployment of queer desire and identification that renders apparent the promiscuous intimacies of our past histories as they continue to structure our everyday present, and determine our futures.” The artistic work of queer diaspora, in other words, present an alternative lens through which one can engage with histories of desire, identity, and nationality, going beyond conventional and dominant narratives privileged in Euro-American discourse. This “queer optic”, she posits, renders visible “non-normative desires, practices, bodies, and affiliations” that have hitherto been concealed.

In the context of contemporary debates around ideas of history, identity and politics of the body, engagement with this queer optic within visual practice has great value – it provokes us to go beyond what we know, to reconsider our past and contend with the hidden complexities of our present. By foregrounding the link between gender, region and affect, it allows us also to formulate new ways of looking at and better understanding what it means to be South Asian within a global landscape. At a time when geopolitical realities are so fraught, especially within South Asia, such radical forms of engagement are more necessary than ever.

Such a radicalism is embodied by the expansive work of pioneering Pakistani-American visual artist Shahzia Sikander. “Her feminist and queer diasporic re-visioning of South Asia conjures forth a palimpsestic landscape that stages surprising encounters, detours, and possibilities that explode binary thinking in all its forms”, she argues in her essay Promiscuous Intimacies: Embodiment, Desire, and Diasporic Dislocation in the Art of Shahzia Sikander (2021). Sikander’s practice, one that enables Gopinath’s “queer optic”, is an act of subversion, or indeed resistance: it overturns, dissolves and inverts known constructs of gender and sexual identity, of nationhood and belonging, and of postcolonial histories.

The multifaceted photographic practice of Indian-born Canadian photographer Sunil Gupta, who is now based in London, carries within it what curator Shanay Jhaveri has called a “vision for a queer politics of belonging”. Over the past several decades, Gupta has created an archive of visual work that makes public the emotional dichotomies within queer communities in India and beyond, enacting through practice Gopinath’s theory of queer optics. Desires, anxieties, challenges, euphoria and despair are all brought to the surface, making public that which has always been private and suppressed.

Join us for a moderated conversation between Shahzia Sikander, Sunil Gupta and Gayatri Gopinath as they explore the diverse ways in which South Asian diasporic art practice represents, or is empathetic to, queerness today. Going beyond individual artistic ideology, the discussion will investigate the broader cultural contexts within which queer art in the diaspora exists, raising questions of identity, affect, desire and the relationship between the personal and the political. The program will be facilitated by Arnav Adhikari.

This is the first session in the Season Two of Art+, developed in partnership with Bloomberg: a series of virtual conversations that critically engage with unique perspectives on contemporary art from South Asia, featuring artists, curators, art historians, and cultural practitioners from across the world. The second season will look at the relationship between art, gender, education and environment. Click here to know more about Season One.

Sikander earned a B.F.A. in 1991 from the National College of Arts in Lahore, Pakistan where her seminal thesis work, The Scroll (1989–1990) initiated the neo-miniature movement leading to increased enrollment in the NCA’s miniature painting department. Subsequently, Sikander was appointed lecturer in miniature painting at the school. The artist moved to the United States to pursue an M.F.A. at the Rhode Island School of Design from 1993 to 1995. Sikander’s work has been exhibited and collected internationally including MoMA, Whitney Museum, Guggenheim, MAXXI Museum Rome, MOT Japan, Asia Society, NY and HK and Jesus College, Cambridge, UK. A traveling survey of her innovative practice opens March 20th 2022 at the Museum of Fine Arts in Houston.

Sunil Gupta is a British/Canadian citizen, (b. New Delhi 1953), MA (RCA) PhD (Westminster), lives in London and has been involved with independent photography as a critical practice for many years focusing on race, migration and queer issues. A retrospective was shown at The Photographers’ Gallery, London (2020/21) and has moved to Ryerson Image Center, Toronto. He is a Professorial Fellow at UCA, Farnham. His latest book is “London 1982” Stanley Barker 2021 and his current exhibitions include; “Every Moment Counts: AIDS and its Feelings” the Henie Onstad Kunstsenter, Norway. His work is in many private and public collections including; Tokyo Museum of Photography, Philadelphia Museum of Art, Royal Ontario Museum, Tate and the Museum of Modern Art. His work is represented by Hales Gallery (New York, London), Stephen Bulger Gallery (Toronto) and Vadehra Art Gallery (New Delhi).

Gayatri Gopinath is Professor in the Department of Social and Cultural Analysis, and the Director of the Center for the Study of Gender and Sexuality at New York University. She works at the intersection of transnational feminist and queer studies, postcolonial studies, and diaspora studies, and is the author of two monographs: Impossible Desires: Queer Diasporas and South Asian Public Cultures (Duke University Press, 2005), and Unruly Visions: The Aesthetic Practices of Queer Diaspora (Duke University Press, 2018). She has published numerous essays on gender, sexuality, and queer diasporic visual art and culture in anthologies and journals such as Journal of Middle East Women’s Studies, GLQ, and Social Text, as well as in art publications such as PIX: A Journal of Contemporary Indian Photography, Tribe: Photography and New Media from the Arab World, and ArtReview Asia.

Arnav Adhikari is a doctoral student in the Department of English at Brown University, where he works on postcolonial and political theories of the subject, focusing on the novel and visual media with an emphasis on South Asia. He was previously an Editorial Fellow at The Atlantic and an Associate Editor at PIX, a photography publication based in New Delhi. Arnav was also Curatorial Assistant for the transmedia exhibition project Look, Stranger! at Serendipity Arts Festival, Goa in 2019.