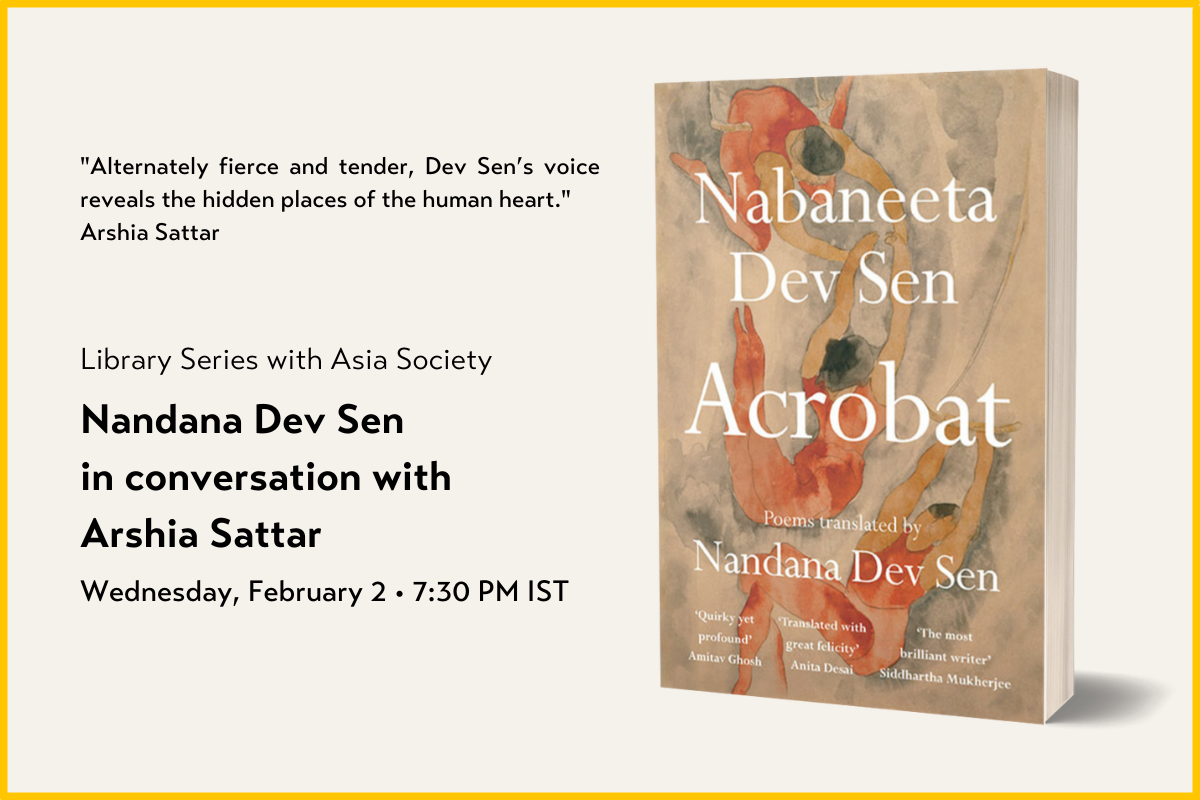 She thought she knew acrobatics rather well.
That she could juggle time with both hands,
Play with the now, right next to the then,
She would make both dance, she thought, fist to fist—
And she would glide, so smooth, along the tightrope,
She thought she could do absolutely anything at all.

Only once in your life will the rope shiver.
- ‘Acrobat’, by Nabaneeta Dev Sen, translated into English from the original Bengali by Nandana Dev Sen

Nabaneeta Dev Sen was one of the foremost Bengali writers of her generation—a poet, a novelist, a scholar, a humorist, a playwright. For the first time comes a translation of her poetry into English that gathers some of the deepest, most beautiful and revealing work she ever created. Translated by her daughter Nandana Dev Sen, the luminous poems in Acrobat, published in India by Juggernaut, explore the joys and agonies of first love, motherhood, and decay with a restless, tactile imagination, both picking apart and celebrating the rituals that make us human.

“These translations of Nabaneeta Dev Sen’s poems capture her quirky yet profound voice so beautifully that I felt I could hear her reading them aloud”, wrote author Amitav Ghosh in praise of the book, a collection that is at once compassionate and unsparing, conversational and symphonic. The lightness of the translations show Dev Sen—a fiery feminist, formidable academic and political activist—at her most human, most intimate.

Join writer, actor and child-rights activist Nandana Dev Sen and fellow writer and translator Arshia Sattar as they delve into the making of this radiant collection, the intimacy of translation, and the lyrical world of Nabaneeta Dev Sen. 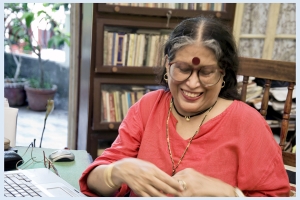 Nabaneeta Dev Sen (1938 – 2019) remains one of the most beloved, versatile and prolific Bengali writers of all time. She published her first book of poems at the age of 21, and grew to be immensely popular in every genre. Equally expressive in poetry and prose, fiction and non-fiction, she has over one hundred books to her credit, including compilations of poems, novels, plays, stories, memoirs, academic essays, children's literature, political columns, literary translations, and multiple volumes of her collected works.

Educated in Presidency College and Jadavpur University in Kolkata, and then at Harvard, Berkeley and Indiana Universities, Dev Sen lived a parallel life as a highly acclaimed international scholar and feminist, and a distinguished professor of comparative literature. Her many honors include the Padma Shri, Sahitya Akademi Award, Bangla Academy Lifetime Achievement Award, Big Little Book Award for Children’s Literature, and the Lifetime Achievement Award of the Publishers and Booksellers Guild.

A tireless mentor to students and young writers, Nabaneeta Dev Sen was the Founder and President of the West Bengal Women Writers’ Association, Soi.

A writer, child-rights activist, and an award-winning actor, Nandana Dev Sen is the author of six children’s books, translated into more than 15 languages globally. She grew up in India, England and America, and has starred in 20 feature films from four continents (and in multiple languages). Nandana’s first book Kangaroo Kisses was selected by 320 UK nurseries as a “Book of Excellence,” and her interactive workshops have been loved, in person, by more than 30,000 young people across the world.

After graduating Phi Beta Kappa from Harvard University (where she won the John Harvard Scholarship and Elizabeth Agassiz Prize each year) and studying filmmaking at the USC School of Cinema-Television, Nandana worked as a book editor, a screenwriter, a script-doctor, an advocate for child protection, and as Princess Jasmine in Disneyland. The winner of the Last Girl Champion Award as well as several Best Actress awards, Nandana has served on the jury of numerous child-protection commissions, global film festivals and international literary prizes (including the DSC Prize for South Asian Literature As an advocate and ambassador, she has represented UNICEF, Operation Smile, RAHI, Apne Aap International, and the National Commission for Protection of Child Rights, to fight against child abuse and to end human trafficking. Nandana is Child Protection Ambassador for Save the Children India. She is on Facebook, Instagram, and Twitter (all three at Nandana Dev Sen), as well as LinkedIn.

Arshia Sattar has a PhD from the Dept of South Asian Languages and Civilizations at the University of Chicago. She has worked with Hindu myths and epics and the story traditions of the sub-continent for over 3o years and has translated the Valmiki Ramayana from Sanskrit to critical acclaim. She has also written three collections of essays (Lost Loves: Exploring Rama's Anguish, Uttara: The Book of Answers and Maryada: Searching for Dharma in the Ramayana) about the Valmiki text and has recently published retellings of myths and the epics for younger readers. She teaches classical Indian literatures at various universities here and abroad and writes about books in numerous magazines. She co-founded and runs the Sangam House International Writers' Residency in Bangalore.

This programme is convened in collaboration with: