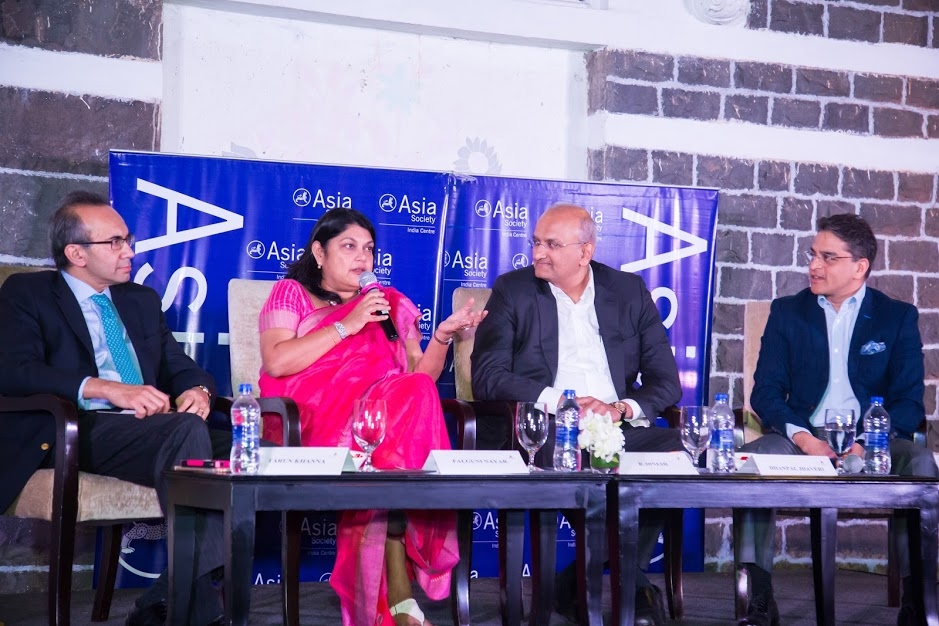 The programme began with remarks by Prof. Khanna wherein he highlighted the importance of creativity as a crucial asset of an enterprise. By quoting various anecdotes from his research on entrepreneurship in developing economies, he remarked that trust between the team members, financiers and more importantly among the customers played a significant role in ensuring the success of the enterprise. The task of an entrepreneur in developing countries is not limited to creating, it is also creating the conditions to create, he commented.

The panel discussion began with Jhaveri requesting Dinesh to comment on the challenges of navigating multicultural scenarios in offshore projects. Dinesh observed that building up the credibility as an Indian brand and overcoming the investors’ concern about an enterprise owned by an Indian were major roadblocks that they had to overcome. Jhaveri then asked Nayar about her experience in gaining the trust of stakeholders while starting her beauty products e-commerce website Nykaa.com to which she candidly responded that asking herself a simple, self-exploratory question like “what disappoints me?” led her to make authenticity a cornerstone of her product and service delivery system, in absence of advanced technological or financial support.

Jhaveri then requested comments from the panel on the opportunities and challenges of e-commerce and social media for established and upcoming enterprises. Khanna mentioned the necessity of having the insight to incorporate technology into the structure of any enterprise. Nayar pointed out that a few negative reviews are often sensationalized as opposed to the positive reviews, which is unfair to the enterprise. Dinesh underlined the importance of humility to admit a mistake and the effort to correct it in maintaining the trust of the customers. On the issue of the role of regulators, Jhaveri observed that the old rules of engagement are no longer applicable in a new marketplace. Nayar also said that the difficulty lies in their inability in foreseeing changes in technology.

The programme was concluded after an interactive Q&A session between the panel and the audience members.