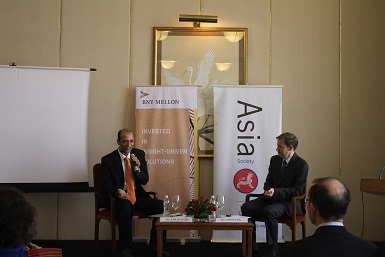 The presentation made by Cox explored the outcomes of a scenairo in which four of the world’s strongest economies began performing well all at once. Cox began by presenting his analysis on the economies of Japan, United States of America, India and China, elucidating on the reasons for his optimistic outlook. He cited the unusal occurance of a stable government and falling inflation in all four countries as one of the main signs of promising growth. He did acknowledge however, that economic performance thus far had not performed upto its truest potential.

To achieve its highest potential, all four nations would have to mobilize labor, accumulate capital and improve productivity. Ajit Ranade while complimenting Cox on his vision and foresight held a more conservative estimate of the potential of the four economies. His reservations arose from Japan’s nominal income dropping and the shrinking population of the nation. Ranade also saw promise in China’s growth, highlighting the many changes in China’s internal policies that would benefit the Chinese economy greatly. Speaking of global debt, Ranade remarked that rising debt was a worrying trend and gave rise to the corporate’s reluctance to invest. The breakfast discussion explored many facets of econmic growth including women’s participation in the work force, foreign policy, the Laffer curve, labor laws, taxation and demographics. Providing our attendees with much food for thought.

The BASIC series presents intimate, invitation-only breakfast round tables that bring together eminent speakers from the fields of Asian business and policy. This represents the kind of informed forum, nuanced insight and new connections that Asia Society aims to bring to bear around key topics of relevance today.