75 Years of India & Pakistan: Past, Present and Future 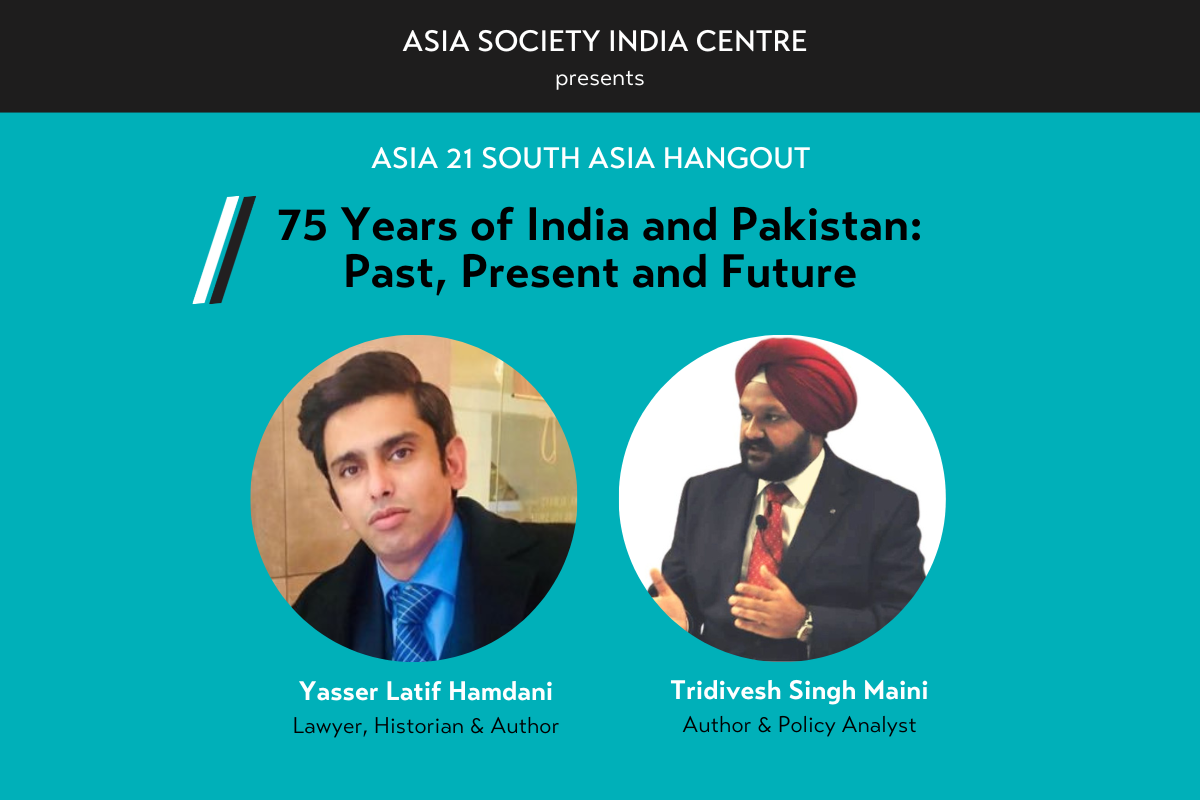 75 Years of India and Pakistan: Past, Present and Future

In August 1947, the British Raj withdrew from what was then undivided India, leaving in its wake not one, but two young nations - the result of a bloody and violent Partition of the subcontinent into what the modern world knows as India and Pakistan. Since Independence, both countries have grown in different ways, building distinct identities and making significant strides across disciplines and fields of work. Relations between India and Pakistan have largely been overshadowed by politically-driven narratives, but their shared pasts present a fertile common ground to discuss the contemporary economic, social and cultural ties between the two nations and the ways in which these ties can evolve in the future, given the current geopolitical landscape of South Asia and its relationship with other parts of the world.

In August 2022, Asia 21 Young Leaders Yasser Latif Hamdani and Tridivesh Singh Maini, who became friends during the Asia 21 Summit in 2013, came together for a virtual fireside chat to commemorate 75 years of Independence with a discussion around the developments and challenges faced by India and Pakistan individually and collectively over the past 75 years. Both experts made a case for the potential of soft power (tourism, religion, sports, art and the interactions between ordinary citizens) in easing tension and building bridges between the two nations.

An edited summary of their individual commentaries are presented below.

Based in Islamabad, Pakistan

In his inaugural address as the father of Pakistan, Mr. Jinnah referred to India as one people – a nation of 400 million souls. To him, India as a whole was something bigger than Pakistan and Hindustan, which he saw as constituent units of this one Indian whole. Somewhere along the way that vision was lost and Pakistan became the great “Not India”. The trajectories followed by these twins have taken them away from what was envisaged by the founding leaders of both countries.

There was a time when this was not the case – a time when open and permeable borders preserved the cultural unity of the subcontinent. There are people in Lahore who have lived long enough remember a time when a book seller from Lahore’s Urdu Bazar would get on a bus and go to Amritsar to find a book that was not available in Lahore. The great city of Lahore, the venue for some of the early Pakistan-India test cricket rivalry, would play host to Indians from across the border – many of whom would come back and stay in the same houses that they had left behind in 1947. This was soon after Partition. People were willing to move on, but things changed drastically in 1965, when the much-touted Enemy Property legislation came about, which designated all vacated properties as “enemy property” in both countries. It was a mutual decision by the two nation states to formalise each other as mortal enemies. We know the rest. The Kashmir dispute remains unresolved, and our two countries have fought four wars in the last 75 years. The wounds are deep and haven’t yet healed.

Earlier this year, my daughter asked me why she could not attend the famous IITs (Indian Institute of Technology) of India as an international student, instead of going to the US. I had no good answer except to tell her that she would have to face a lifetime of explaining to Pakistani authorities why she chose to study in India. Conventional wisdom holds that democracies do not go to war with each other. Pakistan’s democratic journey has often been interrupted, and India’s democratic journey has given way to a populist right-wing nationalism and exceptionalism. Pakistan’s deep state and India’s ascendant right-wing both rely on muscular nationalism to remain entrenched. This means hard borders and an iron curtain between the two countries. Without interaction between ordinary people, there can be no understanding of our differences and their accommodation. Pakistan and India have a lot to gain economically – the dividend that peace and open borders will bring is understated. Tourism from India, for instance, can be a game changer for Pakistan. The creation of a Subcontinent Express – something similar to the famed Orient Express can be started between Pakistan, India and Bangladesh – would be wonderful.

Let us hope that the next 75 years are not spent in this fratricidal conflict and that Pakistan and India become two normal states and good neighbours like the US and Canada, or Germany and France. Nations have gone through conflicts and deadly wars but then made up and got along famously as friends. Pakistan and India can be there one day. Do not rule out the possibility.

Based in New Delhi, India

In spite of the pessimism with regard to the state of India-Pakistan relations, it is important to not lose sight of some developments in recent months.

In November 2021, the Kartarpur Religious Corridor, which connects Dera Baba Nanak, the Indian side of Panjab, with Darbar Sahib in Kartarpur, Pakistan, was reopened. As a result, there have been numerous instances of separated families, from India and Pakistan, re-uniting for the first time after Partition at Darbar Sahib, Kartarpur (the resting place of the founder of the Sikh faith, Guru Nanak) in recent months. These re-unions have been made possible by the efforts of a YouTube channel, Punjabi Lehar (founded in 2013) which has been interviewing Partition survivors from both sides of the divide – including those who were separated from their families at the time of Partition. These instances have received some coverage in the media, and while strategic commentators and a section of the press may be sceptical and dismissive of people-to-people linkages, the reactions on social media have been positive. As a result of this coverage, there is a growing clamour for easing out restrictions for individuals over the age of 75 to cross the border between India and Pakisan. 90-year-old Reena Chibber Verma, for instance, a resident of Pune, got an opportunity to visit her ancestral home in Rawalpindi (Pakistan) and other places, and received a warm welcome.

In spite of political strains in the relationship between the two nations, sporting events have always been played in a cordial atmosphere, albeit with a competitive spirit – as was evident from the T20 World Cup clash between both countries in the UAE, in October 2021, the T20 Asia Cup 2022, and the commonwealth games. Noohdasgir Butt who won the gold in men’s 109+kg received one of his first congratulatory messages from Indian athlete Saikhom Mirabai Chanu. Butt also shares a warm rapport with Gurdeep Singh who won a bronze in the 109+kg category.

In the context of a bilateral relationship, it is always advisable to move incrementally and to focus on low-hanging fruit, especially when it comes to India and Pakistan. The easiest place to start is people-to-people contact, with a specific focus on individuals over the age of 75 who want to visit their erstwhile homes. Both countries needn’t look to any other regional bloc for inspiration, but in fact can take cues from the past – especially the phase between 1947 and 1965, where not just people linkages but also economic ties were far more substantial than they are today.

The changing global geopolitical landscape, especially major moments like the Ukraine crisis, has impacted South Asia in different ways. Pakistan has been dependent upon Ukraine and Russia for wheat, and has now been buying essential commodities at higher prices from other countries. It could revive imports of limited commodities as had been proposed in 2021 by Pakistan but this move was scuttled. While before disruption of trade relations in 2019, bilateral trade between both countries, via the Wagah (Pakistan)- Attari (India) land crossing was estimated at approximately USD 3 billion, a world bank study published in 2018, ‘A Glass Half full: The promise of regional trade in South Asia’, estimated that there is potential for bilateral trade up to USD 37 billion.