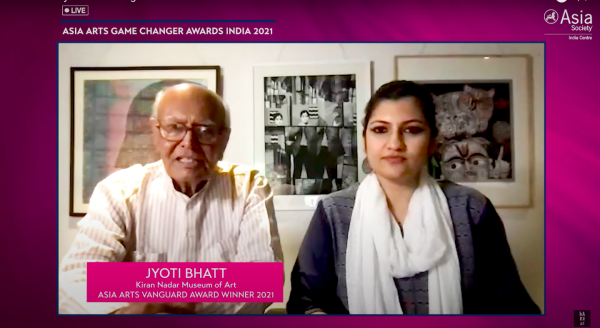 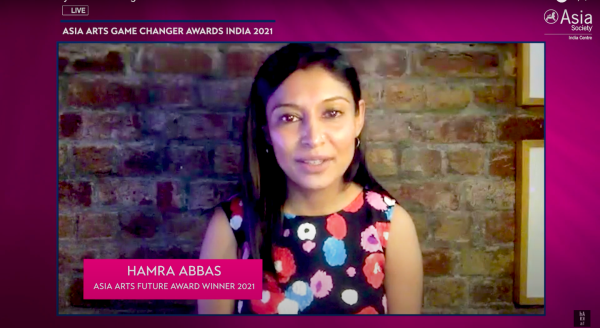 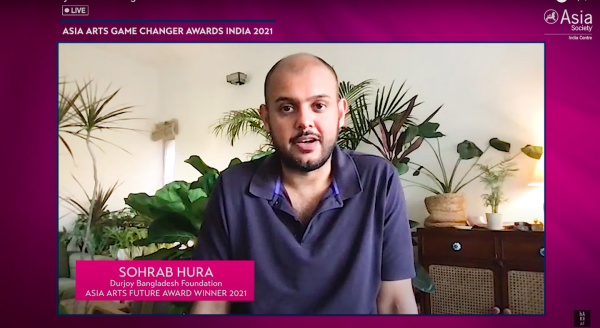 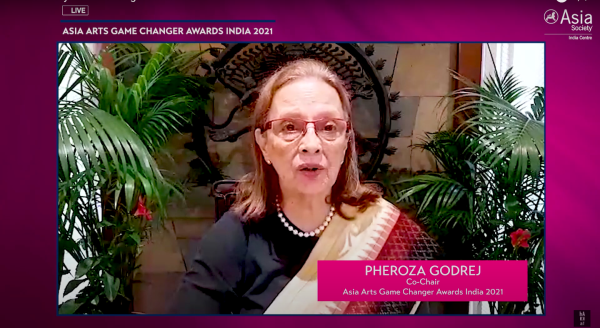 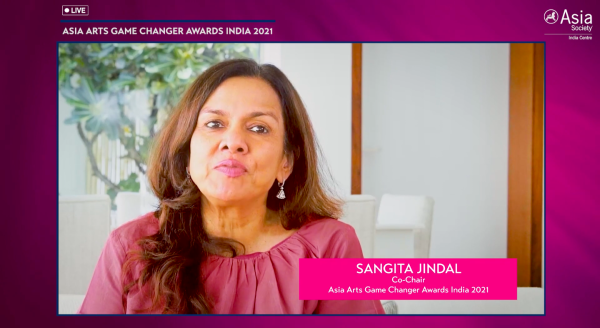 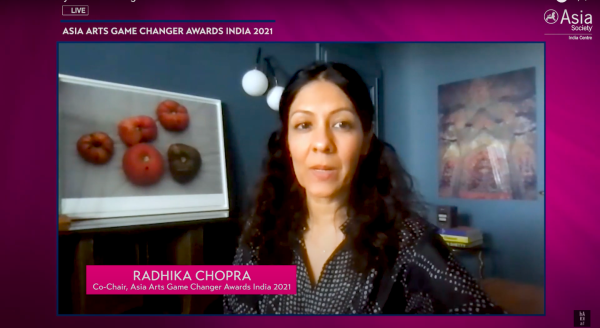 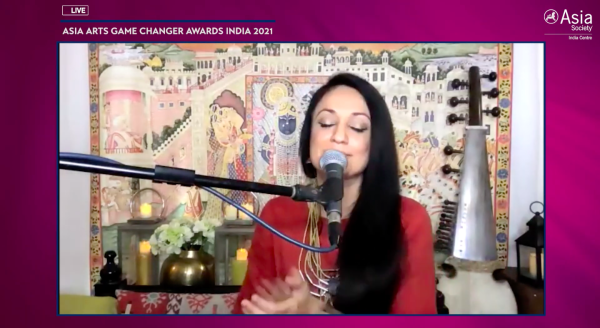 INDIA, June 17, 2021 – For more than thirty years, Asia Society has been a pioneer in identifying and fostering contemporary Asian artists and engaging new audiences with their work. The Asia Arts Game Changer Awards is a signature gala celebration honoring visionaries across the arts field making an impact in the world. The Awards pay tribute to artists and arts professionals who have made a significant contribution to the development of modern and contemporary art in Asia and who inspire a deeper empathy and understanding of the world through their work.

The ceremony was followed by a VIP Lounge, hosted by Co-Chair Radhika Chopra and Arts Committee member Mukeeta Jhaveri. Key stakeholders from across South Asia and beyond joined the reception to congratulate the awardees and share their experiences of working in the cultural sector in the wake of the Covid-19 crisis.

To commemorate the fifth edition of the Awards in India, Asia Society India Centre produced a limited-series of artist portfolios featuring signed reproductions by renowned artists Abir Karmakar, Arpita Singh, Benitha Perciyal, Gulammohammed Sheikh, Prabhakar Pachpute and Vibha Galhotra – all Asia Arts Game Changers from previous years. Conceptualised by Abhay Sardesai, Editor, ARTIndia Magazine, and designed by Reeya Mehta, Founder, The Experimental Box, the portfolio is themed around 'The Absent Year' and poignantly present a marker and memory of the past year through a collection of artworks that negotiate a changing world. As a part of our commitment to support the artistic community in India during this difficult phase, part of the proceeds from The Absent Year portfolio went towards Creative Dignity – an organisation dedicated to providing relief and rehabilitation to Indian artisans in this time of COVID-19 and post-COVID-19 impact.

My journey as an artist is often through people and places. Interview with Hamra Abbas. Critical Collective. June 14, 2021. (subscription required)

Born in 1934 in Bhavnagar Gujarat, Jyoti Bhatt was influenced by his father’s Gandhian philosophy while growing up. He came to Baroda and studied painting from 1950 to 1959 at the Faculty of Fine Arts, Maharaja Sayajirao University Baroda under N. S. Bendre, K. G. Subramanyan, and Sankho Chaudhuri. He joined his alma mater to teach painting from 1959 to 1992. He received scholarships between 1959 and 1966 to travel to Europe and the United States. In 1962 he became a founding member of Group 1890. He has extensively engaged with printmaking and digital media and is an internationally acclaimed photographer, whose archival material of the living traditions of tribal and rural visual arts is historically significant. Since 1959, Jyoti Bhatt has been a commentator on cultural practices through his essays and articles published in vernacular and English periodicals. His art has been exhibited internationally, is in public and private collections, and is the subject of six monographs, among other important publications. He is a recipient of national and international awards, including the Padma Shri, the Kalidas Samman, an Honorary Doctorate, and five lifetime achievement awards. Jyoti Bhatt attributes his sustained engagement as an artist to the guidance of his teachers, the support of his friends, the curiosity of students, the journey of parenting, and the love and friendship of his partner ceramist, the late Jyotsna Bhatt. He lives and works in Baroda, and despite fragile health and failing eyesight continues to work every day in his studio.

Sohrab Hura is a photographer and filmmaker. His work lies at the intersection of film, photography, sound, and text. By constantly experimenting with form and using a journal-like approach, many of his works attempt to question a constantly shifting world and his place within it. His work has been exhibited at the Liverpool Biennial (2021); Kunstmuseum Bonn (2021, 2019); Experimenter Gallery, Kolkata (2020); the Museum of Modern Art, New York (2020); Kettle’s Yard, Cambridge (2019); and Cincinnati Art Museum (2019). His films have been widely shown in international film festivals. The Coast (2020) premiered at Berlinale 2021 while Bittersweet (2019) was awarded the Principal Prize of the International Jury at the 66th International Short Film Festival Oberhausen 2020. The Lost Head & The Bird (2017) had previously won the NRW Award at the 64th International Short Film Festival Oberhausen 2018. Hura has self-published five books under the imprint UGLY DOG. His book The Coast (2019) won the Paris Photo–Aperture Foundation PhotoBook of the Year Award in 2019. The exhibition Growing Like A Tree (2021) opened in January 2021 at Ishara Art Foundation, Dubai, marking his inaugural curatorial project. His work is in the collections of the Museum of Modern Art, New York; Ishara Art Foundation; Cincinnati Art Museum; and other private and public collections. Hura lives and works in New Delhi, India.

Our host for the evening, Rashmi Dhanwani, Founder, The Art-X Company