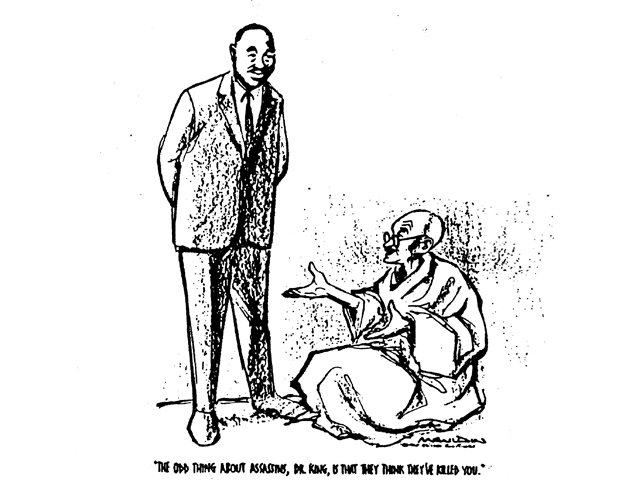 Overview
When Mahatma Gandhi was working out his concept of non-violent resistance, he was impressed by Henry David Thoreau’s advice to resist things that were wrong. Thoreau suggested that individuals could resist immoral government action by simply refusing to cooperate. Gandhi adopted many of Thoreau’s thoughts in developing his concept of Satyagraha (non-cooperation), or Truth Force.  One of the most significant and tangible effects India has had on life in the United States was Mahatma Gandhi’s influence on the Civil Rights leader, Martin Luther King, who adapted Gandhi’s idea of civil disobedience to the civil rights movement in the United States.  Martin Luther King always paid tribute to Gandhi as one of the most important sources of his own values.  In 1959, Dr. King made a pilgrimage to India.

This lesson can enhance a discussion of the civil rights movement in the United States, and can be used as a start of a student research-based project on other instances of civil disobedience and non-violent protest.

Objectives
Through research and textual analysis students will come to know the political philosophies of Thoreau, Gandhi, and King, how their political situations were similar, and how they have influenced each other, politically and philosophically.

Materials
Handout readings and cartoons
Library or Internet for research
Black or whiteboard or poster board and markers
Paper and markers
Educators may want to read Indian Influences on Western Literature, as background on how Thoreau wrote about Hinduism.

1.    For either homework or a class period, break your students up into groups to research the political tactics of Mohandas Gandhi, Henry David Thoreau, and Martin Luther King.

2.    In the next class have each group briefly present these political tactics.

3.    Outline the main points on the board in three categories.

6.    Briefly discuss each one’s religious background.  How are their religious philosophies similar to one another’s? (Consider Ahimsa, nonviolence, love thy neighbor, turn the other cheek, etc.)? What similar values do they promote that may have caused them to be influenced by each other’s tactics?

9.   Have each student draw their own cartoon that makes a statement that they have learned from this lesson.

Extension
There have been dozens of examples of civil disobedience through history, including many instances of civil rights, environment, or religious leaders who have followed the path of Mahatma Gandhi and Dr. Martin Luther King, Jr. For example:

Campaigns for religious freedom, such as the one led by the Dalai Lama or monks in Burma/Myanmar

Environmental movements, such as tree sitting

Ask students to research one of these or a campaign of thier choosing, and find evidence of inspiration--and of unique qualities to that time and place. Students should write an Op-Ed or draw a political cartoon to submit for publication. Students should consider: how do the lessons learned apply to our world today?