And The Golden Age of Korea 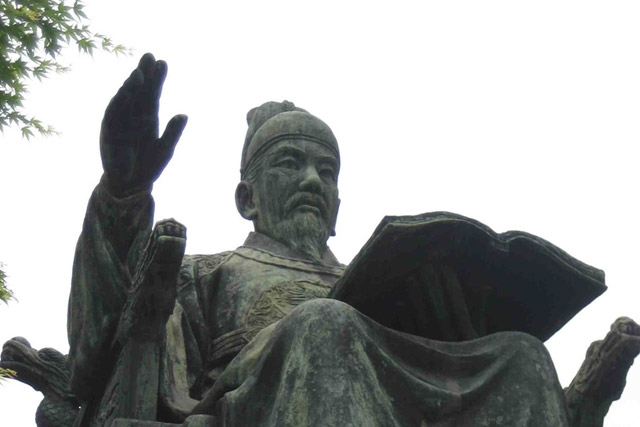 King Sejong, a scholar, placed great emphasis on scholarship and education. He promoted cultural, economic and scientific research. He instituted han'gul, the Korean script. Korea today enjoys many other lasting benefits of his rule.

King Sejong, whose epithet is "the Great," is considered to have been one of the most outstanding Korean kings of the Choson Kingdom (1392-1910). Born in 1397, Sejong succeeded to the throne at the age of 22 when his father, King T'aejong, abdicated in his favor. Chosen in place of his oldest brother, the rightful heir to the throne, whose lifestyle and conduct were deemed unfit for a king, Sejong became the fourth monarch of the Choson Kingdom. His reign, which lasted until 1450, was a period of great cultural and intellectual accomplishment in Korea that is often called the Golden Age.

King Sejong governed according to the principles of Confucianism upon which the kingdom had been founded. These principles included the idea that justice and righteousness should characterize the relations between sovereign and subject. King Sejong believed that the basis of good government was a ruler with broad-ranging knowledge, virtue, and the ability to recognize and utilize men of talent for government service.

As an administrator, King Sejong introduced many progressive ideas and implemented reforms to improve the life of the common people. In times of drought and flood, he established relief programs and opened centers to provide food and shelter. For farmers experiencing unsuccessful harvests, he reinstated a loan system that had been used during the Koryo Kingdom (918-1392) in which the government's stored surplus grains were loaned out to them to be paid back in kind with nominal interest.

King Sejong, a noted Confucian scholar himself, placed great emphasis on scholarship and education. He promoted research in the cultural, economic, and political heritage of Korea, and he sponsored many new developments in the areas of science, philosophy, music, and linguistics. To encourage young scholars to devote their time to study, he established grants and other forms of government support.

The most outstanding of his achievements by far was the creation of the Korean alphabet, or han'gul. Previously, scholars had learned classical Chinese and had relied on the Chinese script for literary purposes, but Koreans did not have an appropriate script for their spoken language. Until the invention of han'gul, they had used clumsy and cumbersome systems that made use of some Chinese characters for their pronunciation and others for their meaning to represent the vernacular language But Chinese, a language very different form Korean in its vocal patterns and sentence formation, could not represent Korean sounds and structure adequately. Besides, the complexity of Chinese characters made the writing system too difficult for those other than the privileged few to learn and master.

King Sejong wanted to provide Koreans with a written means of expression other than the complicated Chinese system. With this objective in mind, he commissioned a group of scholars to devise a phonetic writing system that would correctly represent the sounds of spoken Korean and that could be easily learned by all people. The system was completed in 1443.

Initially, the use of han'gul was opposed by many scholars and government officials. They argued that its use would hinder education and government administration, both of which were dependent on the Chinese writing system. Despite this, however, King Sejong ordered popular poems, religious verses, and well-known proverbs to be translated into han'gul to encourage its use. Han'gul was thus a political, in addition to a linguistic, achievement.

King Sejong commissioned a significant number of literary works. He saw books as a means of spreading education among his people. One of the first works he commissioned was a history of the Koryo Kingdom. Others included a handbook on improved farming methods to increase production, a revised and enlarged collection of model filial deeds, and a illustrated book of the duties and responsibilities that accompany human relations.

King Sejong contributed to Korean civilization in a number of other ways, as well. He made improvements in the movable metal type that had been invented in Korea around 1234. He initiated the development of musical notation for Korean and Chinese music, helped improve designs for various musical instruments, and encouraged the composition of orchestral music. King Sejong also sponsored numerous scientific inventions, including the rain gauge, sundial, water clock, celestial globes, astronomical maps, and the orrery, a mechanical representation of the solar system.