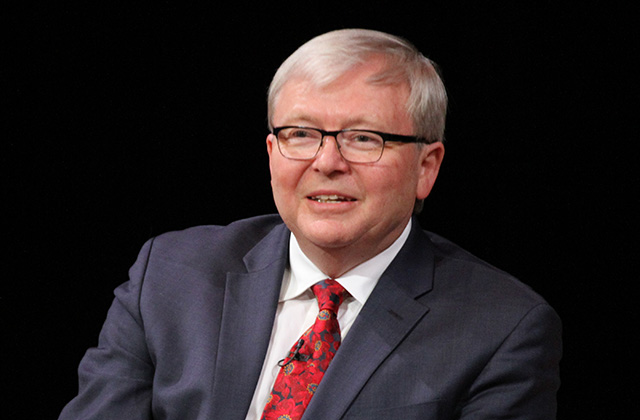 An agreement struck this past weekend in Paris among nearly 200 nations setting goals to establish global carbon markets and limit temperature rises is “is an ambitious set of arrangements that is to be applauded,” says Asia Society Policy Institute (ASPI) President Kevin Rudd.

Then on December 18 in San Francisco, Kevin Rudd will join Orville Schell to discuss the deal and U.S.-China climate cooperation.
Learn more

Rudd, who pushed for an emissions trading scheme as prime minister of Australia, told Bloomberg that Australia will inevitably return soon to carbon pricing, "hopefully with a floating price in order to become part of the system.” He added that with an international system in place, individual countries will have less of an excuse to dodge action on climate change.

From the Bloomberg story:

"It’s easier for emissions-trading schemes to come into place now that we have the Paris agreement,” Rudd said by phone from New York. “Prior to that we’ve had disputation across the fossil-fuel industry, with governments saying: ‘The rest of the world is not going to act. Why should we? Wash our hands of responsibility. Goodbye.'"

The Paris deal struck on Saturday won’t come into force until at least 55 nations accounting for 55 percent of the world’s emissions ratify it, potentially at a ceremony planned for April. China, the European Union and the U.S. alone produced 54.8 percent of the world’s fossil-fuel emissions last year, BP Plc data show. Eighteen nations including the U.S., Japan and Germany said they will work together to develop international carbon markets.

“If you have a combination of Europe on the one hand, northeast Asia on the other, then you have an emerging carbon market in North America, you are beginning to address the major sources of emissions in an effective market-sensitive mechanism,” Rudd said.