Kevin Rudd: “Cities Must Play a Leading Role in the Global Response to Climate Change” 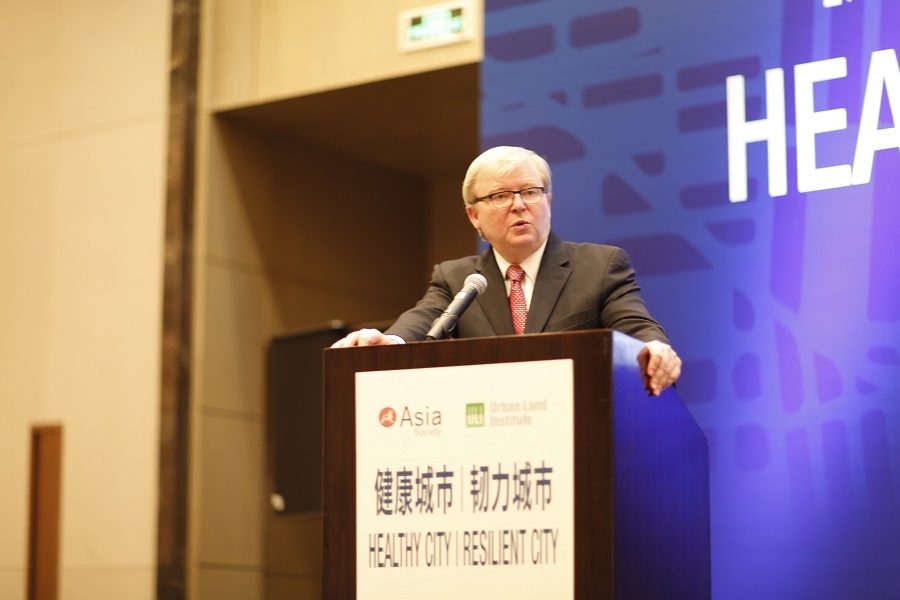 Speaking at the Third Annual Pacific Cities Sustainability Initiative Forum in Beijing from April 20-22, 2015, Asia Society Policy Institute President and former Australian Prime Minister Kevin Rudd said that cities have the ability to address the growing dangers of climate change, which he said is the biggest challenge facing humanity. Rudd added that China and the United States, as the two largest CO2 emitters, must work together for any climate solution to work.

The goal of the forum, presented jointly by the Asia Society and the Urban Land Institute, is to explore and refine the attributes of a healthy, sustainable, and resilient city. The forum seeks to catalyze new innovations and relationships that will lead to positive outcomes for cities throughout the Asia Pacific region and the world.

Rudd, who is serving as the inaugural president of the Asia Society Policy Institute, expressed confidence in the innovation, creativity, and determination of the people of both countries in addressing the challenges posed by climate change and sustainable development.

Speaking to the role that cities can play in addressing climate change, Rudd noted that more than half of the world’s population lives in cities, and that cities generate a huge amount of greenhouse gas emissions. Rudd also said that national governments have an important role.

“The first thing governments can do, at the national level, is put a price on carbon,” he said. “My observation of human behavior is that behavior changes in response to either (A) price or (B) a regulation, which is enforced.”

The advantage of putting a price on carbon instead of using regulations, according to Rudd, is that “it creates a market mechanism through which firms and emitters, across the world, can respond flexibly according to the price that’s been set.” The responses can include reducing energy use or switching to alternative energy sources to improve overall energy efficiency. “It is remarkable, when you look around the world, how energy inefficient we still are,” said Rudd.

Pricing measures become effective when you involve the maximum number of producers responsible for the maximum amount of emissions and impose a price on them, allowing them to pass the price through the economy. The political question is how widely you cover the economy, said Rudd. In terms of emissions, manufacturing, energy, and transport cover about 80 percent of the economy.

On the supply side, Rudd said we need to cause the renewable-energy sector to have sufficient critical mass that can begin to take over a large part of the global demand for electricity.

“Unless we are firmly focused on what happens on the supply side and the demand side, all the proclamations in the world won’t produce a reduced greenhouse gas footprint,” said Rudd.

He said that absent a binding global treaty on emissions, cities must take the lead in action in this area. “There is a concentration of sheer intellectual horsepower, of markets, of finance, of the ability to make climate change solutions work on the ground.”

But according to Rudd, whatever is done in cities can be only part of the solution. National governments must be brought into the equation as well. “Unless that happens, you will simply pass the ball down to the next generation, and the next, until it is too late,” he said.

People have generally looked to governments for financing of sustainability projects, but Rudd said there is a limit to what governments can do. “The creative challenge for the future of our cities, and for climate change within our cities, is to use public and private capital in the most creative ways to bring about sustainable solutions,” said Rudd. Private capital, public capital, and public policy must work together to address the global challenge of climate change.

“We’re all in one boat,” said Rudd. “It’s called Planet Earth. If we work together on pricing, on energy efficiency technologies, and on alternative-energy supply, then frankly we can save the planet.”