George Takei Warns of Stereotyping, 'Hysteria,' and the Lessons of Japanese Internment 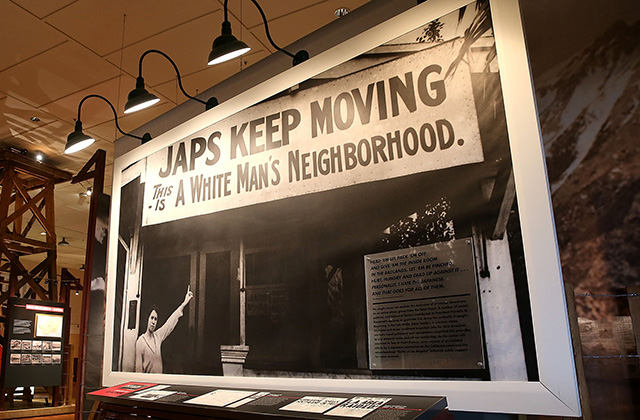 A vintage photograph is displayed at the Manzanar National Historic Site near Independence, California on December 9, 2015. Manzanar War Relocation Center was one of ten internment camps where Japanese American citizens and resident Japanese aliens were incarcerated from 1942 to 1945 during World War II. (Justin Sullivan/Getty Images)

On Wednesday, a spokesman for a Super PAC backing Donald Trump defended the proposal made by a member of the president-elect’s transition team to create a registry for immigrants from Muslim countries by citing the World War II internment of Japanese Americans as a “precedent.”

“You know, call it what you will, maybe wrong,” Carl Higbie of Great America PAC said of Japanese internment in a Fox News interview. “I'm just saying, there is precedent for it. I'm not saying I agree with it.”

“The president needs to protect America first,” he continued when pressed by host Megyn Kelly. “If that means having people who are not protected under our constitution have some sort of registry so we can understand, until we can identify the true threat and where it's coming from, I support it.”

In February 1942, three months after the Japanese attack on Pearl Harbor that prompted U.S. entrance into the Second World War, President Franklin D. Roosevelt issued an executive order to “relocate” Japanese Americans from the West Coast. More than 110,000 Japanese Americans were subsequently sent to internment camps across the country without due process. The camps operated for the duration of the war, with the last remaining open until March 1946. Many detainees, who were taken from their property, jobs, and communities, never fully recovered from the financial and social ruin.

Internment is generally regarded as one of the more regrettable episodes in American history. In 1988, President Ronald Reagan signed an act to give reparations of $20,000 to each surviving detainee. In 1991, on the 50th anniversary of the Pearl Harbor attacks, President George H.W. Bush issued a formal apology from the U.S. government. “No nation can fully understand itself or find its place in the world if it does not look with clear eyes at all the glories and disgraces of its past,” he said. “The internment of Americans of Japanese ancestry was a great injustice, and it will never be repeated."

See more Asia Society coverage of Donald Trump and his potential influence on the countries of Asia.Learn more

One of the most well-known survivors of Japanese internment is former Star Trek actor George Takei, 79, who in recent years has become a vocal advocate for a number of social issues including Asian American equality and LGBTQ rights.

In April, Takei spoke at Asia Society in Los Angeles on a panel about Asian Americans in Hollywood, which was held in reaction to a skit at the Oscars featuring Asian children that many deemed racist. In his remarks, he recalled as a five-year-old child in California being awoken and pulled out of his home with his family at gunpoint by two American soldiers. They were then put on a train to an internment camp in Arkansas with barbed wire, machine guns, and a spotlight that would follow those getting up to use the latrine at night.

“For my parents it was invasive, degrading, and humiliating,” Takei said. “I spent four years of my childhood imprisoned behind those barbed wire fences.”

Actor George Takei shares a personal story from his childhood where stereotyping landed his family in internment camps. (6 min., 8 sec.)

Takei explained how the seemingly innocuous stereotype of “inscrutable” Japanese at the time quickly became toxic amid wartime paranoia. It was an environment ripe for political opportunism on the back of racism and mistrust of those with Japanese ancestry. One of the figures to most aggressively ride that wave was then-California Attorney General Earl Warren, who became one of the strongest voices pushing for internment in the state.

He was a good man. He knew the law, but he was also ambitious. He wanted to be elected governor of California and he saw that in that war climate the most popular issue was to lock up the Japanese. And so this top attorney in California got in front of that issue. He became an outspoken advocate of internment. He made an amazing statement: ‘We've had no reports of sabotage or spying or fifth column activity by Japanese Americans, and that is ominous because the Japanese are inscrutable.’

That stereotype — they don't know what we're thinking, so we should be locked up before we do anything. For this attorney, the absence of evidence was the evidence. And that fed into the hysteria of the time that reached the presidency of the United States; and he ordered all Japanese Americans on the West Coast to be summarily rounded up without charge, no trial, because you need charges to challenge in a court of law to have a trial. The central pillar of our justice system simply disappeared.

Warren ultimately did become governor of California, and later chief justice of the U.S. Supreme Court. Despite his role in enabling Japanese internment camps, he is perhaps better remembered as an advocate for civil liberties. He presided over the Supreme Court that unanimously struck down racial segregation in schools with the landmark 1954 case Brown v. the Board of Education.

Warren, however, continued to defend his stance on Japanese internment into the 1960s. But when his memoirs were posthumously released in 1977, he appeared to show some contrition.

“I have since deeply regretted the removal order and my own testimony advocating it because it was not in keeping with our American concept of freedom and the rights of citizens,” he wrote. “Whenever I thought of the innocent little children who were torn from home, school friends, and congenial surroundings, I was conscience-stricken. It was wrong to react so impulsively, without positive evidence of disloyalty, even though we felt we had good motive in the security of our state.”

Watch Takei’s remarks in the above video. Watch the complete program in the video below.