The Disappearance of Tiananmen | Asia Society Skip to main content

The Disappearance of Tiananmen 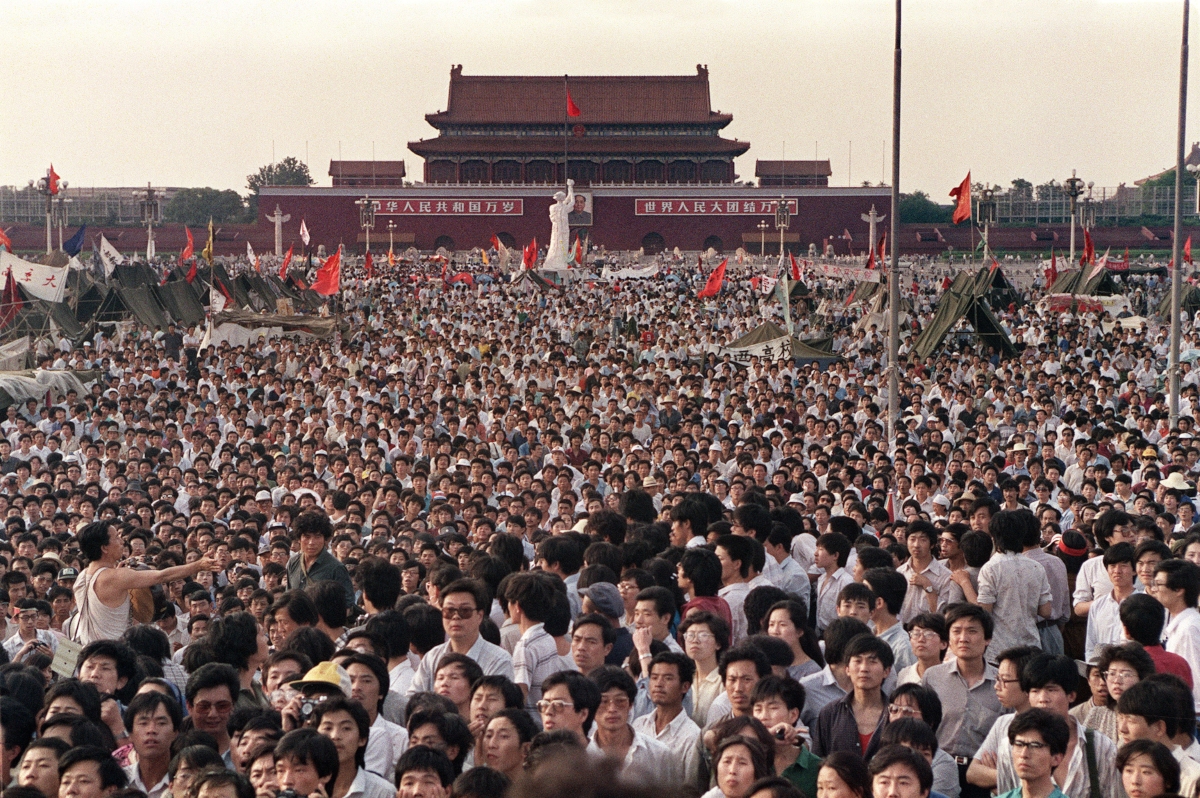 Hundreds of thousands of Chinese gather on June 2, 1989, in Tiananmen Square around a 10-meter replica of the Statue of Liberty (C), called the Goddess of Democracy, demanding democracy despite martial law in Beijing. (Catherine Henriette/AFP/Getty Images)

On June 3, Orville Shell, Nicholas Kristof, Susan Jakes, and Zha Jianying will discuss the lessons of the Tiananmen Square massacre at Asia Society New York. The program will be live webcast at 6:30 p.m. Learn more

In the aftermath of June 4, 1989, the infamous day when People’s Liberation Army tanks swept through the area around Beijing’s Tiananmen Square, killing hundreds, if not thousands, of peaceful demonstrators, many observers felt that the massacre would not halt what the scholar Andrew Nathan described as China’s “irreversible trend toward democracy.”

The protests came at the close of a decade in which the space for political debate had widened in China; where intellectuals held “democracy salons” in Beijing and frank criticisms of Communist Party rule were tolerated. Just as market reforms propelled China’s economy to new heights, political reforms, too, seemed to have unstoppable momentum.

As democracy spread across eastern Europe, there was ample reason to believe that change in China would be next. Eight days after the military violently shut down the protests, Hendrik Hertzberg insisted in the New Republic that it was inevitable that the demonstrations “would end in some sort of victory,”

Thirty years later, it’s apparent that the Tiananmen Square crackdown was simply an inflection point — the moment the possibility of democracy disappeared into a drawer. For years, American policymakers believed that a China, grown wealthier through inclusion in the U.S.-led economic order, would transition to democracy — a belief author James Mann famously termed “the China fantasy.” It hasn’t happened.

In the last 30 years, a period in which the country has grown increasingly wealthy and powerful, China has taken one key lesson from Tiananmen, said Scott Savitt, who, as a young reporter for UPI, covered the crackdown. “If they don’t stop one person from acting out, it’ll be seen as a green light by many more. You can’t let your foot off their necks.”

Writing on the 20th anniversary of the crackdown in 2009, Susan Shirk described the concrete steps that China has taken to ensure another Tiananmen Square never happens again: Prevent large-scale protests. Avoid public leadership splits. And keep the military loyal to the Communist Party. “For the past 20 years, with the specter of another Tiananmen crisis haunting them, China's leaders have worked hard to shore up all three fronts — social quiescence, elite unity, and military loyalty,” she wrote.

The Chinese government has gone to extraordinary measures to ensure that public discussion of Tiananmen never happens. Ding Zilin, an 82-year-old leader of the Tiananmen Mothers — a group of women who organized following the slaughter of their sons and daughters — is still followed by plainclothes police wherever she goes. Children too young to remember the protests by and large don’t know about them. Yangyang Cheng, born in 1990, only learned about what happened after moving to the United States for school. She wrote in ChinaFile:

The first time I saw visuals from that unspeakable date, it was on the computer screen of my new classmate at the University of Chicago.

"When I hear ‘Tiananmen,’ the first thing I think of is Tank Man,” said the boy from New Hampshire.

“You gotta be kidding me.” He pulled out his laptop and typed into Google. “You have never seen this before?”

I explained how the Chinese government blocked websites and censored information, and that politics was taboo in my family. Nevertheless, I felt a deep sense of shame. I had just been taught something new about my own country from an American who had never been to China.

Even if China’s entire population were aware of what happened in 1989, the repercussions for speaking about the massacre are so severe that there’s little to gain from raising the subject.

“The Chinese government is so afraid of its past,” said Louisa Lim, author of The People’s Republic of Amnesia, at Asia Society Texas in 2014. “Memory, which is the most personal of spaces, has instead become a political tool.”

Lim elaborated on this point in an interview with Asia Blog. “Mass forgetting means never having to revisit, or take responsibility, for your actions,” she said. “Such a lack of accountability coming from the very top has a profound effect on society, and I think some of the symptoms of the morality crisis we see today derive from this sense that selective inconvenient portions of China’s recent history do not need to be revisited.”

Nevertheless, says the scholar Perry Link, whose work uncovering the truth about Tiananmen earned him a permanent ban from traveling to China, the work of memory must go on.

“We remember June Fourth because shocks to the human brain last a long time,” he wrote this week in ChinaFile. “We would not be able to forget even if we tried”