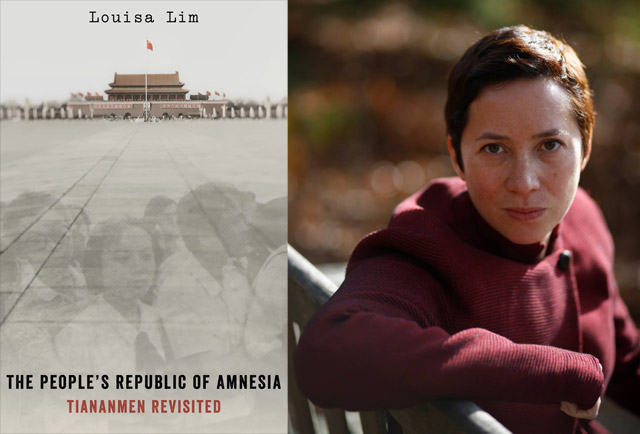 On June 19, 2014, at the Asia Society Texas Center, author and NPR China correspondent Louisa Lim will discuss her new book about the 1989 Tiananmen Square massacre.

Yesterday, the world marked the 25th anniversary of the Tiananmen Square massacre in Beijing. There were mass gatherings, candlelight vigils, and wall-to-wall media reports — but in China, the country in which the bloody government crackdown on student protesters occurred, there was silence. There was also censorship. On Chinese social media, buzzwords like "1989," "remember," and even "today" were wiped clean. It's as though the dark day never even happened.

Longtime NPR China correspondent Louisa Lim, currently a Knight-Wallace Fellow at the University of Michigan, investigated this phenomenon of forgetting in her new book, The People’s Republic of Amnesia: Tiananmen Revisited, which The Economist called "meticulously (and often daringly) reported."

Lim will discuss her book tonight, June 5, in a talk with ChinaFile’s Jonathan Landreth at the Strand Book Store in New York, and on June 19 she'll appear at Asia Society’s Texas center in Houston.

The events of June 4 are widely acknowledged as a watershed moment in Chinese history. How has Tiananmen come to influence Chinese society?

The events of 1989 are the pivot point for China’s contemporary history. Bao Tong — who was a key aide to the deposed reformist leader Zhao Ziyang and spent seven years in jail after 1989 — views Deng Xiaoping’s first speech after the killings to martial law troops as his "last will and testament." In that speech, Deng laid down the foundations for today’s China by affirming a strategy of economic liberalization without political reform, bolstered by a patriotic education campaign. He also emphasized the overarching importance of stability. That led to the fast-paced economic growth that lifted millions out of poverty, allowing disposable incomes to be almost 20 times higher than in 1989. But that post-Tiananmen strategy also accounts for many of the problems bedeviling China today including rampant corruption, the massive wealth gap, growing nationalism and the ascendancy of the security apparatus.

How costly is this mass forgetting for China and its people? Do you think silence is a form of participation?

Mass forgetting means never having to revisit, or take responsibility, for your actions. Such a lack of accountability coming from the very top has a profound effect on society, and I think some of the symptoms of the morality crisis we see today derive from this sense that selective inconvenient portions of China’s recent history do not need to be revisited. The Chinese film professor Cui Weiping wrote about the “crime of silence” as a form of participation in amnesia, saying that if the silence continues, “June 4th will no longer be a crime committed by a small group of people, but one in which we all participated.” Unfortunately, I think the cost of memory is so high that many Chinese feel they have no choice except to remain silent.

For all the people I profiled, I really didn’t know the details of their stories until I began talking to them. Their journeys, and their characters, were so powerful that in the end I changed the entire structure of my book, so that I could do justice to these individuals. In each case, they took the decision to talk to me, knowing that the concomitant risks could never really be weighed up, given the shifting sands of Chinese politics.

You took extensive safety precautions while writing your book, including not surfing the internet on the laptop on which you wrote and locking it in a safe each night. How do you think the book’s publication will affect your future in China, and do you have plans to return?

I do not know what effect the book’s publication will have on my ability to live and work in China, but I hope to go back some time. At the moment, I have no plans to return in the near future.

Why has the Chinese government stayed silent regarding the Tiananmen incident over the years? And what do you think would be the result or potential consequences if China were to finally publicly acknowledge what happened?

Judging from its behavior, the administration of Xi Jinping clearly believes that publicly addressing the events of 1989 could threaten China’s stability. By detaining so many people who publicly spoke to the Western media this year, the government is sending a very clear message that any kind of public discussion of the killings of June 4th risks real punishment. Next year, no doubt, people within China will be much more wary of talking to the media, since the cost has been made clear to them.

Indeed any historical reevaluation appears to be off the agenda, since Xi Jinping has made it clear that he would not repudiate Chairman Mao or revisit any of the disastrous political campaigns that happened during Mao’s decades in power. As for the consequences of publicly acknowledging what happened, the party clearly sees it as too dangerous a move to contemplate. There is a precedent: the re-evaluation of the 1976 demonstrations in Tiananmen square following the death of Premier Zhou Enlai. These were initially labeled "counter-revolutionary riots" — like the 1989 protests — but were reassessed as "patriotic" when Deng Xiaoping took power two years later.

The founders of the Tiananmen Mothers had initially believed it would only take a couple of years for a similar reassessment of the events of 1989. But the passage of time makes that prospect seem more unlikely, since current leaders trace their lineage to Deng Xiaoping and the heirs he anointed after the power struggle cleaved their party in 1989. Given the extent of this year’s repression, we seem further than ever from any re-evaluation of the killings of 1989.