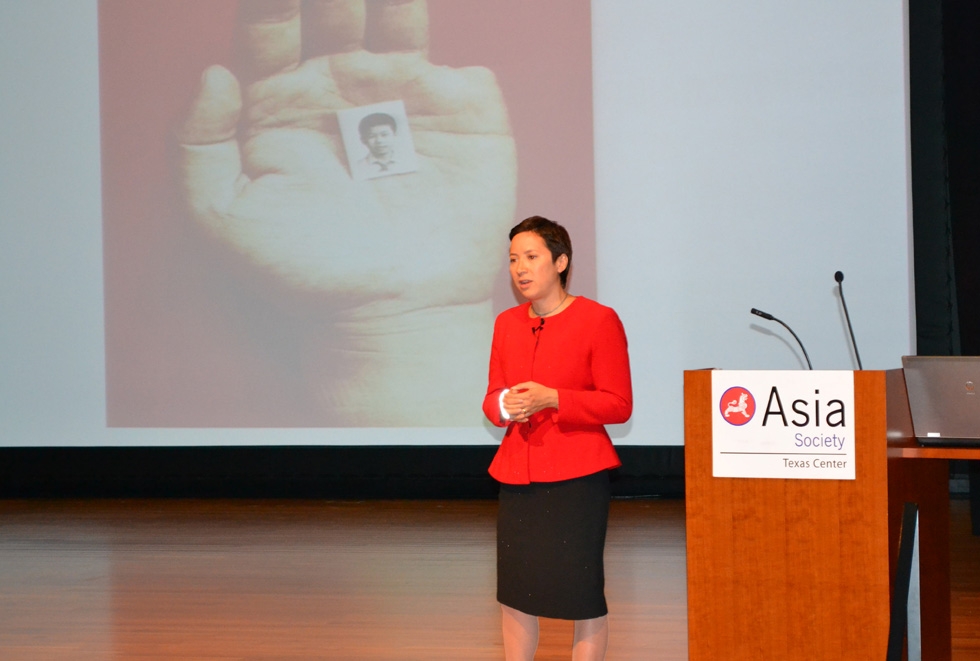 HOUSTON, June 19, 2014 — NPR China correspondent Louisa Lim spoke at Asia Society Texas Center about her new book, The People's Republic of Amnesia: Tiananmen Revisited. “My book is about the events of 1989 that changed China," she said, “and how in turn, China changed the events of 1989 and rewrote its own history.”

Lim shared rare photos and video from events that took place twenty-five years ago. In April of 1989, what began with students mourning the death of a reformist leader quickly became a nation-wide movement against nepotism, abusive power, and inequality. For seven weeks, there were hunger strikes, demonstrations, and failed attempts by the government to declare martial law. The protests in Beijing were finally suppressed by the Chinese army on June 4, 1989. To this day, no one knows how many died.

Today, Lim argues that the government has done all that it can to erase the events from its history. The protests have been explained by Chinese media as counter-revolutionary riots. Schools teach that the actions of the government were extreme, but necessary — “a retrospective justification based on three decades of rapid economic growth in China.” Still, more do not even speak about the events at all. Lim’s investigation uncovered a forgotten crackdown in the southwestern city of Chengdu— which to this day has never been reported.

“Memory depends on geography," Lim explains. In the West, the iconic picture of “Tank Man,” a defiant civilian blocking the path of a column of tanks in Beijing’s Tiananmen Square is so recognizable that it has become an important part of popular culture. But when she brought the same image before students attending four universities in Beijing, only fifteen in one hundred students could recognize the context of the image. Many believed the photo to have been taken in North Korea or Cosovo. Nineteen percent believed it to be capturing a military parade.

The lack of accountability and its implications were further explored through personal accounts of tragedy. Tang Deying, now in her 70s, spent twenty-five years trying to find out from the government the circumstances around her son’s disappearance. In 2000, she was given by police a photograph of her son’s battered corpse. In 2006, the government gave Deying a “hardship allowance” of almost $9,000 in hopes that she would cease her complaints.

“The Chinese government is so afraid of its past, “ Lim claims, emphasizing that China both refuses to talk about Tiananmen, and also forbids others to remember it. “Memory, which is the most personal of spaces, has instead, become a political tool.”