Weijian Shan's Talk on his story of China and America

It was with an admirably stoic and ironically humorous demeanor that private equity pioneer Dr. Weijan Shan, Chairman and CEO of PAG Group, addressed an audience at the University of Southern California on August 19, recounting the privation and loss he endured under Mao Zedong’s Cultural Revolution. “It is important to understand the hard history that people from my generation lived through in order to understand China, today,” he explained.

Through a series of compelling photos, including a pre-revolution Mao, a publicly shamed former President Liu Shaoqi and first lady Wang Guangmei, as well as personal photos of himself and his late comrades, Shan described the seemingly insurmountable plight of a generation prematurely stripped of their education and made to work for less than a dollar per hour in rural China, known as sent-down youth. Shan conceded to the fact that he, like many at the time, was initially drawn to the promises and propaganda of Mao’s campaign: “I grew up believing that China was one of the most prosperous socialist countries in the entire world. But I lost my sympathy toward that president” At the age of fifteen, he became one of thousands forced by the Party to cease further education and relocate to the Gobi Desert, a piece of land previously considered barbarian territory prior to Mao’s reign.

“The hardest part was having no education,” he said, despite just having shared stories of endless hunger, digging holes for drinking water, crushing labor, burning cow dung as fuel, and coerced separation from his entire family. “I had so many friends who were so talented, but their lives were wasted.” He reminisced on a friend and former violinist, explaining that had Mao never shut down schools and ruralized his generation, “I’m sure he would have become one of the most accomplished artists in China.”

In his shockingly playful aspect, Shan recalled several memories of his unyielding desire to educate himself, further illustrating an infinite strength of character that has come to shape his entire life and career. He had dived into bonfires to save books meant to be destroyed under the Red Army; among those he saved were an insecticide manual, written in English, which he read cover to cover in his efforts to learn English. He’d sacrificed his few hours of sleep to study an English dictionary snuck to him by a fellow worker.

Despite the “hopelessness” he once felt, Shan’s endeavors would not be in vain. Jumping forward to his years as a graduate student at the University of California, Berkeley, he laughingly admitted, “Nobody ever knew that I had never been through business school; nobody questioned my credentials”, owing his success to the time he spent trying to find purpose through books in the Gobi.

After the talk attended by Asia Society Southern California board members, scholars and business executives, Shan accepted a gift from Chairman Richard Drobnick. 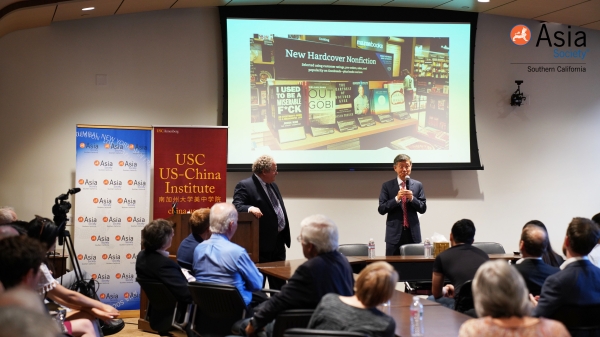 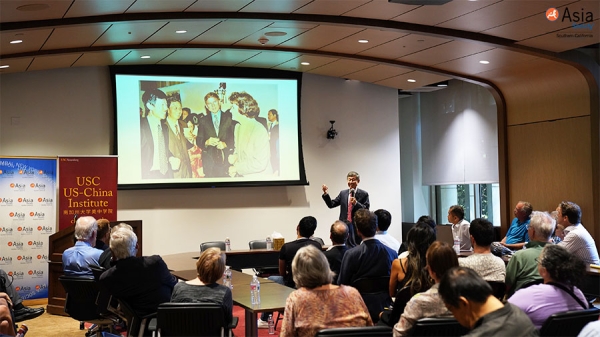 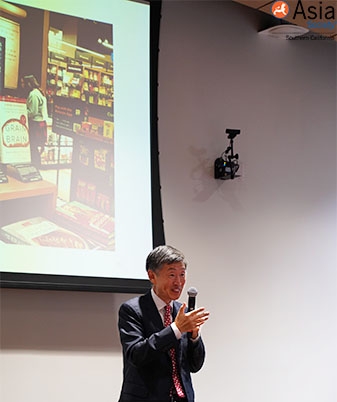 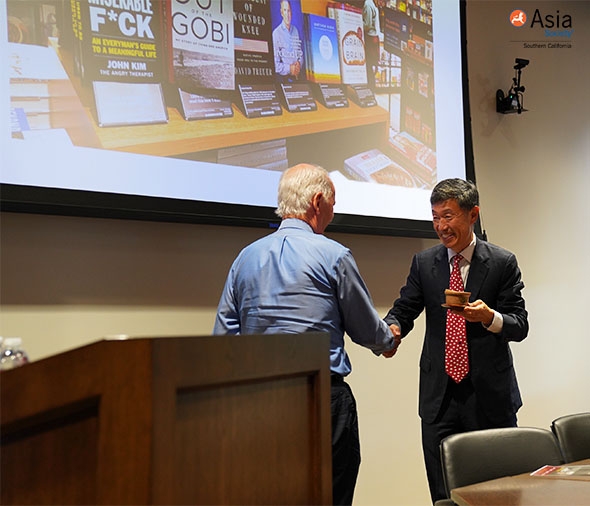